"Do Not Start What Will Finish You," Joe Igbokwe Warns Eastern Security Network

By Ojochenemi (self meida writer) | 4 months

The Public Relations Officer of the Lagos State chapter of the All Progressives Congress, Chief Joe Igbokwe has descended heavily on the operatives of Eastern Security Network and their founder.

The ESN which was established to checkmate the activities of herdsmen in the east have been facing a lot of criticism because of the mode of operation.

Joe Igbokwe who is also the Special Adviser to Lagos State Governor on Drainage, have also taken a swift at the members of the security outing, warning them not to start What they can not be able to see the end.

He took to his Facebook page on Tuesday to blast the outfit after sharing their photo on his wall. He said "They say this is Eastern Security Network. Please do not start what you cannot finish"

He also said better still they should be mindful of what will finish them. According to him, the core objectives of the Eastern Security Network is built on a faulty ground " Do not Start What Will Finish You" he said on his wall. 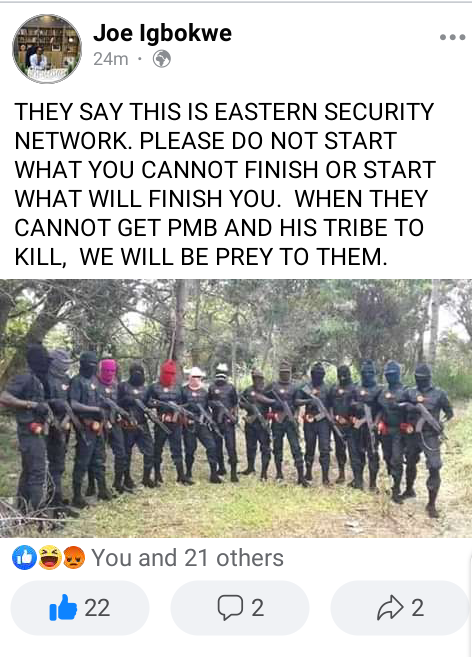 Speaking further, Chief Joe said it is obvious they did not succeed in getting the president to unleash a full military power on them, they are now becoming a prey.

Hear him. "when they cannot get the president and his tribe to K-ILL, we will be Prey to them." he said.

Joe Igbokwe have been outspoken against the ESN since their creation. Despite being in the same region with them, he has constantly criticise them.

What Is Sheikh Gumi Up To With Respect To Banditry In The North? - APC Spokesperson

Broda Shaggi, Ijebu And Others Reacts After Teni Makanaki Post Picture With A Broken Hand

"Why you are calling for Oduduwa Republic and Biafra, we the North will remain as Nigerians" - Auwal