By Immacoolb (self media writer) | 2 years ago 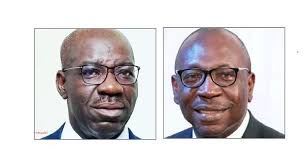 The protracted battle between the political gladiators of who wins the gubernatorial seat comes 19th September is soon coming to an end which is exactly 60 days from now. The race for the Gubernatorial seat in Edo State is between the incumbent Mr Godwin Obaseki the PDP flagbearer and Pastor Osagie Ize-Iyamu, Apc flagbearer. This looks as an irony in Edo history where both Mr Obaseki switch from APC to PDP and Pastor Osagie switched from PDP to APC during the party primaries.

It will be remembered during the 2016 election; that the odds were against Obaseki but with the Oshiomole influence he imposed Obaseki on the party thereby dropping Mr Ize-Iyamu who stood a better chance of winning the election. Most of APC member and supporters including Oshiomole allies supported Pastor Ize-Iyamu but Governor Oshiomole resisted and foisted Obaseki on the party, which to many in the party, Obaseki was seen more as a technocrat and less of a politician. Now in 2020, the political permutation in recent times has shown the unfolding among Oshiomole, Ize-Ize-Iyamu and Obaseki which have greatly change; Obaseki once Oshiomole allies, now an enemy, While Ize-Iyamu, once Oshiomole enemy, now a friend and political ally.

As it stands, it is impossible to predict who will win the Edo State Gubernatorial election come September, 19 as the politicians from other states such as Nyesom Wike, who is the Chairman of Obaseki Campaign Council and his Kano State counterpart Alhaji Ganduje who is also chairman of Pastor Osagie Campaign Council are putting all it takes to ensure that their candidates win the forthcoming election. To political feelers, this will be a testing ground for preparation come 2023 presidential election.

However, if Obaseki wins the election comes 19th September 2020, it will be double humiliation for Oshiomole and retirement from politics, as such, Oshiomole will use all his arsenals to ensure Pastor Osagie wins the election. Obaseki will bank on his achievement in his first tenure to win block vote and maintain his seat, while Pastor Osagie will be using his political experience and support from party and supporters to achieve this feat.

Who wins the election will be decided solely by the masses come September 19th which is just 60 days away,

Content created and supplied by: Immacoolb (via Opera News )