How Fayose May Beat Oyinlola, Others to Emerge as the next National Chairman of PDP

By OmoobaAlekuwodo (self media writer) | 26 days ago 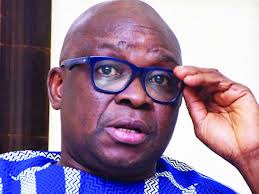 Pending any unforeseen political occurrence, the opposition Peoples Democratic Party (PDP) has set Friday, 30 and Saturday, 31 October, 2021 for the National Convention of the party.

Superbly, among the prominent politicians who are being considered to be elected as the next National Chairman of the opposition Peoples Democratic Party (PDP) are former Governor of Ekiti State, Peter Ayodele Fayose; former Governor of Osun State, Prince Olagunsoye Ishola Oyinlola, Governorship aspirant of the party in the gubernatorial poll in Ondo State, Professor Eyitayo Jegede, among other prominent members of the party who might have declared their interests or later join the race for becoming the next National Chairman of the opposition party.

However, former Governor of Ekiti State, Peter Ayodele Fayose is being tipped to beat other contestants to emerge as the next National Chairman of the opposition Peoples Democratic Party (PDP).

Also, the mutual political relationships between Peter Ayodele Fayose and Northern politicians like Alhaji Atiku Abubakar, Engineer Rabiu Musa Kwankwaso, Senator Bukola Saraki, majority of the Northern Governors who were elected under the platform of PDP, Senator Dino Melaye and other prominent northern politicians may assist him to, definitely, earn more support of the delegates from the Northern part of the country than any other aspirant.

Specifically, the neutral position maintained by Peter Ayodele Fayose in the agitation for the removal of Prince Uche Secondus as the National Chairman of PDP may, certainly, assist him to have the support of some prominent politicians from Southeast and South South geopolitical zones. This may assist him to gain the supports of prominent politicians like former president Goodluck Ebele Jonathan, former Anambra State Governor Peter Obi, Prince Uche Secondus.