By News_update (self media writer) | 2 years ago 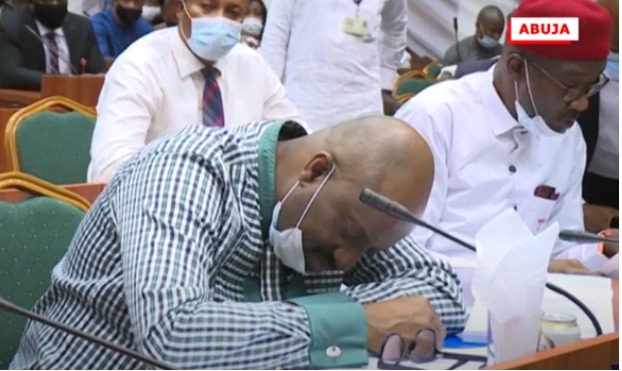 Acting Managing Director of the NDDC, Daniel Pondei, During Corruption Interrogation On Monday In Abuja.

The Acting Managing Director of the Niger Delta Development Commission, Daniel Pondei, fainted during the fourth day public interrogation on Monday 20th July 2020, over the alleged misappropriation of funds.

The House of Representatives Committee on Niger Delta Development Commission (NDDC) is in its fourth day of public hearing as it conduct an inquiry of an alleged fraudulent appropriation of funds at the Agency. The House of Representatives Committee on NDDC, examined him throughly for over an hour when he appeared to gradually slumped over his desk which indicated that he fainted.

As several people present at the hearing caught site of him, they rushed to help by supporting him to avoid his head shaking or falling over his desk, in order to stabilize him with the proceedings to end the interrogation. As other people present at the hearing held him upright, there appeared to be a man who was in a seizure with him. After several hours of examination and trying to stabilize him, he appeared to regain his consciousness and lose composure at regular intervals, then he was moved out of the session.

The sudden occurrence led to a brief discourse on the next step to be taken. A move to adjourned the session was shouted before the Deputy Chairman of the Committee declared for a 30-minute break.

This is really another ‘Political Nollywood Acting’ from the Acting Managing Director of the Niger Delta Development Commission, Daniel Pondei.

What’s your reaction to this sudden occurrence?