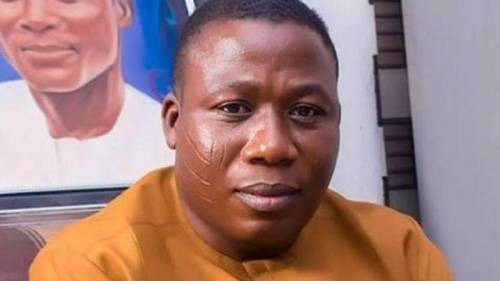 According to a publication that was made yesterday by Sahara Reporters, it was made known that one of Chief Sunday Igboho's lawyers, whose name was given as Olusegun Falola, as made it known that his client, won't be coming back to Nigeria again, whenever he is released from detention in Cotonou, the Benin Republic untill President Muhammadu Buhari leaves office.

According to what he said, he made it known that Sunday Igboho took the decision because, President Muhammadu Buhari created a hostile environment for him in Nigeria and in lieu of this, he will either reside in Germany or Benin Republic.

Taking a look at Sunday Igboho's decision, it shows that he already perceived that he can't face the challenges coming out from his agitations anymore. In February, when DSS and soldiers intercepted Sunday Igboho's convoy at Sat Guru Village, close to Ibadan Toll Gate, he claimed in the video that surfaced that, President Muhammadu Buhari can't do anything to him because, he is staying on his fatherland and due to this, no one can do anything to him or touch him.

But, the statement that was released yesterday by Igboho's lawyer shows that, Sunday Igboho is now afraid of President Muhammadu Buhari, which could be one of the reasons why he decided to fly to Germany through Benin Republic.