By Oraclebuzz (self media writer) | 2 years ago

20 Reasons why Edo people will not vote Obaseki

1. Goodwin Obaseki Shutdown the only College of Agriculture, Iguoriakhi since 2018 and sacked all all the academic and non academic staff.

And staffs are owed over 11 months salaries. 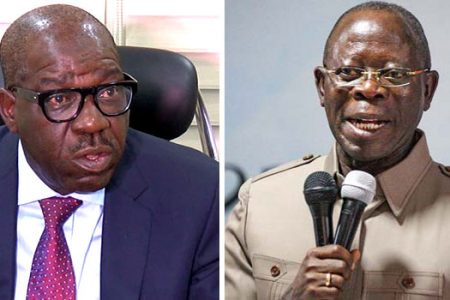 7. Obaseki HAS REFUSED TO EMPLOY A SINGLE TEACHER IN THE PAST FOUR (4) YEARS of his administration despite the huge deficit of secondary school classroom teachers in Edo State.

15. Social affordable housing scheme for Edo workers and other residents in the State- FAILED PROMISE.

17. The N2.2 BILLION NAIRA for Sobe farm in Owan West LG was EMBEZZLED.

18. 1 BILLION NAIRA for the fight of Covid-19 in just about two months of the pandemic was EMBEZZLED.

- The 2.2 billion for crop production was EMBEZZLED.

- The 2.3 billion for land development (just to cut grasses) was EMBEZZLED.

- The 100 million naira for irrigation was .

26. In just one week Obaseki spent over 10 BILLION NAIRA of Edo money to purchase both the PDP governorship ticket (N8 BILLION) and sponsor the PDP Governorship Primaries (over N2 BILLION).

27. Obaseki has thrown open the treasury and resources of the Edo State government to the PDP “tax collectors” within and outside the state at the detriment of the Edo people.

29. Obaseki spent highly inflated sums of money to train primary school teachers on how to use the computer at an incredible cost of N1.5 MILLION NAIRA per teacher. He used his cronies from Lagos pretending as consultants to siphon Edo money.

30. In 2016, Godwin Obaseki increased his security vote from 500 million to 650 MILLION NAIRA per month. He has pocketed 24 BILLION NAIRA of Edo money in the past 32 months as governor in the name of security votes.

Insecurity is however on the increase in Edo State because Obaseki gives a paltry 5 million naira monthly to Edo State police command to combat crime.

31. Despite the 650 million naira monthly security votes, Edo State Police Command remains poorly motivated, short of good vehicles and other necessary equipment to assist them in making their job of securing Edo easier.

33. Killer herdsmen on the rampage unchecked.

34. Kidnapping on the increase under his watch.

35. Cult related killings on the rise without any solutions from the Obaseki government.

36. Obaseki has littered Edo State with substandard and poor quality road projects which are usually washed away after a few months of construction.

37. Obaseki has not built a single hospital or renovated old ones. Government general hospitals across the state are in comatose state yet he refused to put to good use the ultra-modern five star Central Hospital built by his predecessor.

38. Flooding has taken over Benin City because Obaseki refused to continue the Benin City water storm project initiated by his predecessor.

39. Godwin Obaseki has crippled night life in Benin City by putting off the street lights. He has put the once bright and beautiful city in total darkness.

40. Obaseki has secretly reached an agreement to hand over power to his deputy, Philip Shaibu in 2024 if he wins re-election, yet at the same time, he is currently promising and deceiving Edo central of Esan governorship in 2024.

This secret pact was the reason behind his insistence on having a joint ticket with Philip while negotiating for an alternative party platform, which eventually cost him an extra N2 BILLON NAIRA to the initial N6 BILLION NAIRA (making N8 BILLION) to secure the PDP Governorship ticket from the PDP

Content created and supplied by: Oraclebuzz (via Opera News )