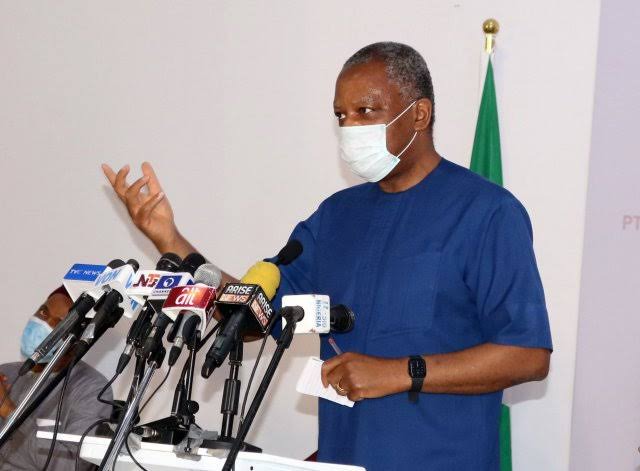 “Did my fourth Covid-19 test yesterday at the first sign of a throat irritation and unfortunately this time it came back positive,” Onyeama tweeted on Sunday afternoon.

“That is life! Win some lose some. Heading for isolation in a health facility and praying for the best,” he added The immediate past National Chairman of the All Progressives Congress, APC, Adams Oshiomhole, says he made a costly mistake by supporting Godwin Obaseki to become Governor of Edo State in 2016.

The former Governor of the state disclosed this while addressing a mammoth crowd of supporters who trooped to his private resident in Iyamho, Etsako West Local Government Area of the state.

Oshiomhole said the incumbent Governor’s failure to continue on the plethora of projects he started has hindered development in the state in the past three and a half years.

The former APC National Chairman, who expressed delight at the warm reception he received from his people, said he will correct the errors he made in 2016 which saw Obaseki emerge as the Governor in the next September 19 governorship election.

President Muhammadu Buhari has been asked to intervene in the confusion created by the Minister of Education on the exact date schools will reopen to enable students to take the West African Senior and junior schools certificate examinations, already fixed for August 4 to September 5.

In this report, AIT examines the implications of the minister’s action, which has been receiving mixed reactions from several quarters.

While Adamu gets the support of the 19 northern states governments through their education commissioners, the south west states at a virtual meeting initiated by the Development Agenda for Western Nigeria, DAWN, in collaboration with the forum of South-West education commissioners, special advisers on education, and the state universal basic education board chairmen, resolved to go ahead with school resumption

Before now, the Lagos, Ekiti, and Oyo states have already fixed dates to reopen schools The Ekiti State Government has commenced the decontamination of public schools in the state. The exercise is in preparation for the planned reopening of schools in the State.

Speaking during the exercise, the State Commissioner for Environment, Gbenga Agbeyo, said the State Government is committed to the well-being of the residents.