Opinion: What Tinubu Did That May Give Him Edge Over Other APC Presidential Aspirants In 2023

The former Governor of Lagos State and the National Leader of the All Progressives Congress APC, Asiwaju Bola Ahmed Tinubu, might be contesting 2023 Presidential election, under the Platform of the Party.

Though, Asiwaju Bola Ahmed Tinubu has not made his intention to the Public, to contest the race but his Loyalists have been creating awareness to the Prominent Nigerians, over his Presidential Ambition.

However, Tinubu may not be the only Leader from the southwest, that will be contesting Presidential race, under the platform of APC. It was rumoured that the Governor of Ekiti State, Governor Kayode Fayemi, might also be interested in the race. Though, Fayemi has not openly, declared his Presidential Ambition, to the Public.

Asiwaju Bola Ahmed Tinubu was one of the Leaders that brought APC to the limelight, in southwest. President, Muhammadu Buhari get the support of the entire southwest, because of Tinubu.

One of the APC Chieftains, who was also the secretary to the Federal Government, Babachir Lawal was granted an interview with Punch Newspaper last year and he emphasized on how Tinubu raised money, for President Buhari's campaign in 2015

Babachir Lawal stated further that Tinubu did all what he can, to ensure the victory of President Muhammadu Buhari in 2015.

Another thing that could give Tinubu edge, over other Presidential Aspirants, was the support he gave to Governors, under the Platform of APC, especially from the Southwest.

Tinubu has developed more Leaders than followers and the Governors may want to reciprocate back to him. The kind gestures that Asiwaju Bola Ahmed Tinubu has shown to the People, in the Past, may give him edge, over other Presidential Candidates of the Party. 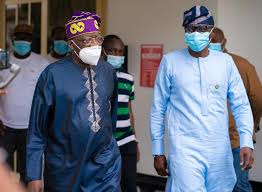 It should be recalled that the Governor of Lagos State, Asiwaju Bola Ahmed Tinubu, recently launched the Southwest Agenda (SWAGA) in the State. SWAGA is the Group, emancipating for the realisation of Tinubu's Presidential Ambition in 2023.

Meanwhile, the Governor of Ondo State, Rotimi Akeredolu, has also reaffirmed that Tinubu remains the Leader of the Party in Southwest and Members of the Party recognized him, because of what he done for the Progress of the Party.

This means that Tinubu may get the support of the Chieftains of the Party. The reason is that, they will to reciprocate the kind gestures, Tinubu has shown to them in the Past.