By Kudoscube (self media writer) | 2 years ago 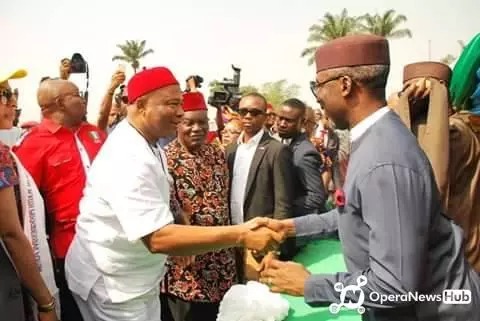 Uneasy lies the head of Gov Hope Uzodinma of Imo State, as the Federal High Court failed to dismissed the suit brought before it by the RAP governorship candidate, Kingdom Opera, demanding an interpretation to the Supreme Court judgement against Ugwumba Uche Nwosu.

Uche Nwosu was disqualified over a verdict of dual candidacy. The Supreme Court ruled that Uche Nwosu was the candidateof both the APC, and AS in the last election.

With Gov Hope Uzodinma emerging the winner of the election under APC, RAP demanded an explanation and clarification from the court over the judgement.

The Federal High Court didn't put Gov Hope Uzodinma at ease, as the hearing was adjourned again to the 20th of July.

There is believed to be a lot of backroom negotiations, going on right now to save the governor's job, and is believed to be the reason for the adjournment to the case, as there are very powerful interests involved.

As it is, Uzodinma's fate hangs in the balance, as a verdict against him at the High Court, without a stay of execution before an appeal, will see Uzodinma out of office.

A judgement against Uzodinma, would return Rt Hon Emeka Ihedioha to Douglas House, or may yet install Uche Nwosu as the third governor of Imo State in one year.

Content created and supplied by: Kudoscube (via Opera News )