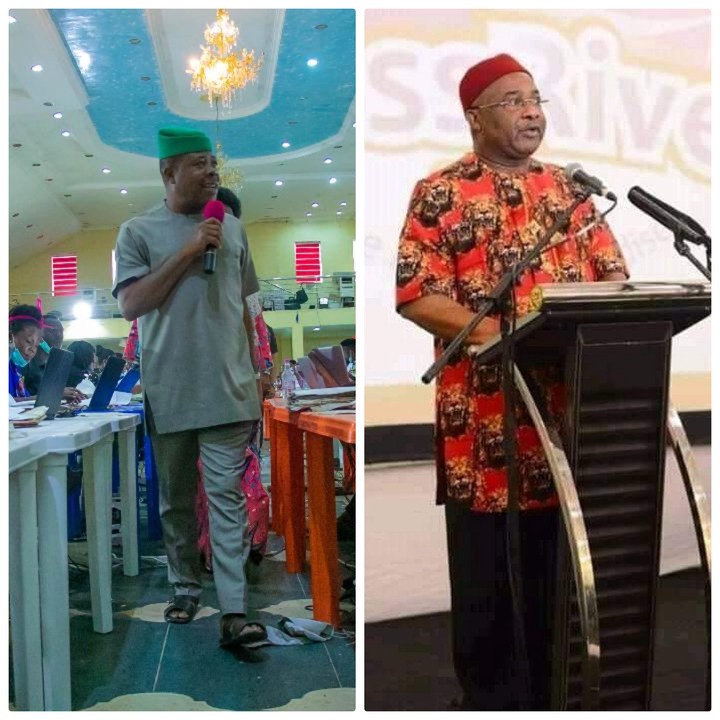 Who Between Ihedioha And Uzodinma Can be term desperate

For a while now since leaving office, we've been silently reminiscing and introspecting over the daylight robbery that took place in Imo state, wherein a mandate freely given by Ndi-Imo to Rt. Hon Emeka Ihedioha and the party PDP was stolen, and the position given to an individual and party who never worked for it.

While this situation which defiled logic and rational thought still lingers in the mind of the people, the graveyard peace and deafening silence of the people serving as the expression of shock and disbelieve, the organizational confusion in the governance of the state proving the assertion correct that when a child is given a gift bigger than his expectations, he queries to whom it is meant for, same could be used to categorize the very disposition of the present occupiers of the Imo government house for the now, both in expressions and behavioral imperatives.

It's daily becoming too obvious that the gift of leadership of the state bequeathed to them by the powers that be in Abuja is indeed too big for their comprehension, hence they continued watching their shoulders at every point in time since assuming office to ascertain if the rightful owner is approaching.

Truth is that it's an unconscious act which takes place whenever one is holding on to what doesn't belong to him, and truly so, the law of nature repudiates the act of one usurping the position of another with impunity, for when such is the situation, nature takes away peace of mind and thoughts from the usurpers and leaves them with unsettled thoughts and fear of the unknown.

With the above postulations and detailed thoughts front loaded, it's easier for my readers to comprehend the precarious situation of uneasiness that now pervades the political horizon of those saddled with the responsibility of leadership in Imo state now, which gave expression in the strange narrative of the present Imo commissioner for information, Mr Declan Emelumba,calling out the former governor, Emeka Ihedioha out for vilification, accusing him of desperation to return to power through the backdoor, a statement attributed to him in both print, electronic and social media spaces, and for which there has not been a denunciation.

Now my question is, can anyone be rightly accused of desperation to return to his rightful place, or the usurpers of the rightful owner's position desperate to holding on to what doesn't belong to them in the first place? Most certainly what is playing itself out now is evidentiary, to the effect that their shadows are indeed hunting them; and the confusion in their narrowed thoughts given expression in their chequered narrative that former governor Ihedioha is responsible for the new twist in court proceedings challenging their eligibility to hold on to the office of the governor of Imo state.

Consequent upon this delirious disposition of Declan Emelumba, which is perhaps responsible for the unsubstantiated accusation, the truth remains that the guilty are always afraid, and we have no apology whatsoever for their continued troubled minds, "maka isi kotere ebu ka oga agba"(no peace for the wicked).

Hope Uzodinma and his information commissioner rather than concern themselves with defending their position in court, now seek to divert attention and whip up undue sentiments with the case, given the fact that it's same court that they approached when they felt shortchanged after the election, same likewise gave them the position which they now occupy to spurn gibberish and pour aspersions on the integrity of the former governor Emeka Ihedioha, now one begins to ponder and wonder on why they suddenly develop cold feet over going to court? When in actuality same court made them what they are today?

Wait a minute! Does their actions not portray desperation in gargantuan magnitude here? I mean, who between Ihedioha and Uzodinma could be rightly termed desperate? I leave my readers to proffer answer to these questions, and only then would the usurpers be unveiled and spoken of in their rightful terms.

For whatever it's worth, bandying words and throwing accusations wouldn't suffice with one approaching the court for judicial interpretation of any grey areas in a judgement, and the individual that took the liberty to approach the court for such purpose isn't a neophyte in this regard, himself a lawyer by profession, and therefore insulting to his integrity to be accused of being used by someone else to do what he is well versed at, and which affected him personally.

Indeed common sense is not that common, as such those bereft of same should passionately approach the creator in humility to avail them of it, or better still understudy those who are imbued with it already. They shouldn't in anyway be afraid of defending themselves in court, same manner Emeka Ihedioha was never afraid defending himself when they took him to court over his expressly given mandate; and if by stroke of imagination it's proven correct they are occupying the seat of power illegitimately, then they should likewise take the ruling with equanimity, same manner Emeka Ihedioha took his, and if the court holds otherwise, then they remain, as power is only but transient and the appurtenances ephemeral, for anyone to play God.

My candid advice to Governor Hope Uzodinma, is that he should not allow his overzealous handlers whom are in the penchant for frivolous, unsubstantiated and spurious allegations to create much enemies for him in power, because power is never permanent for anyone to boast of it, and rather than accuse anyone falsely for whatever reason, it is best for him to concentrate on his court cases, and leave Ihedioha alone, whom from all indications has since moved on, as such you should move on with governance and forgo politicking for the now, except of course the pendulum turns against you, then you learn to live with it as your predecessor is now doing.