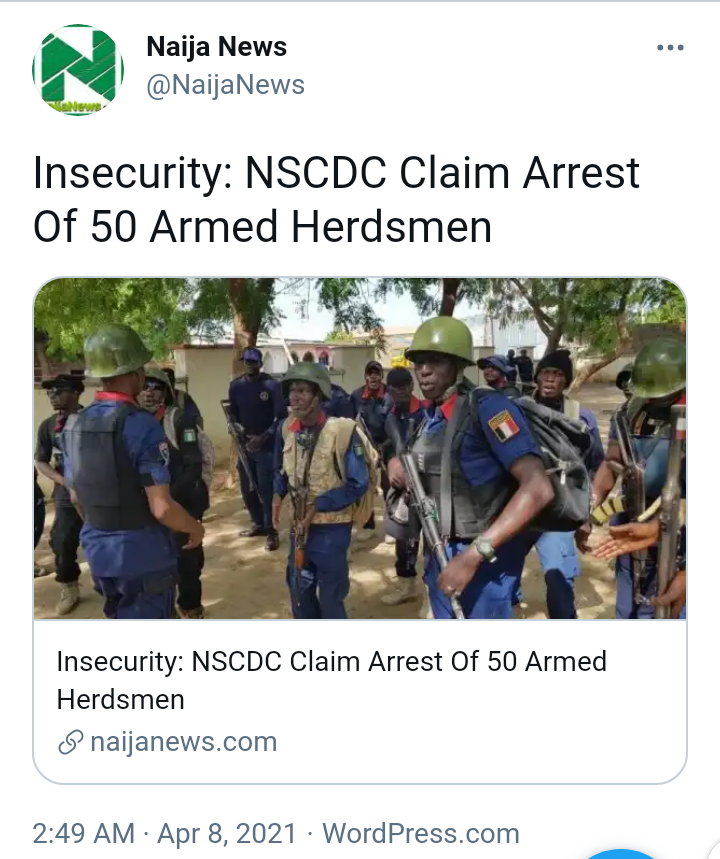 The Nigeria Security and Civil Defence Corps, NSCDC has said its operatives in the last week apprehended at least fifty persons involved in criminal activities including banditry, kidnapping and cattle rustling.

The development was confirmed to newsmen in Abuja on Wednesday, April 7 by the Commandant-General of the NSCDC, Dr Ahmed Audi, Naija News reports.

Audi while presenting licences to 17 private security guard operators in Abuja yesterday, disclosed that the armed herdsmen were apprehended in Ekiti, Borno, Cross River and other states.

The NSCDC CG stressed the need for synergy among security agencies, noting that the security challenges besetting the nation could only be addressed substantially through sharing of intelligence. 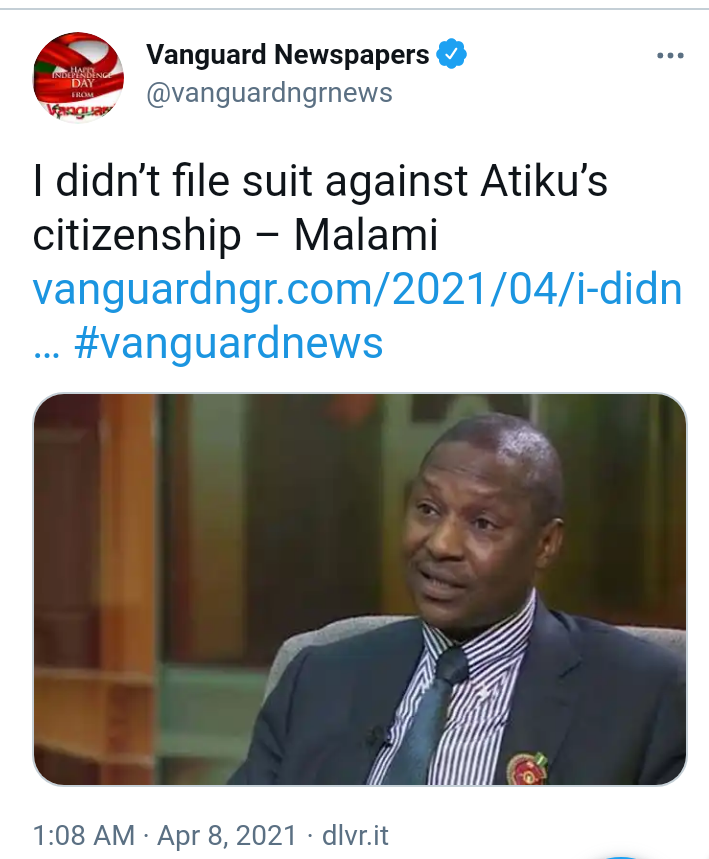 Attorney-General of the Federation and Minister of Justice, Abubakar Malami, said he did not institute any legal action on the citizenship of the former Vice President of Nigeria Alhaji Atiku Abubakar.

Malami said this in a statement by Dr Umar Gwandu, his Special Assistant on Media and Public Relations, in Abuja on Wednesday.

He said the matter in contention was part of the 2019 pre-election matters instituted by a Civil Society Organisation – the Incorporated Trustees of Egalitarian Mission for Africa – in suit no: FHC/ABJ/CS/177/2019.

He said that it was in respect of it that Alhaji Atiku Abubakar, Peoples Democratic Party (PDP), Independent National Electoral Commission (INEC) and the Office of the Attorney-General of the Federation were made co-defendants.

He noted that the issue had already been widely reported by the media since April, 2019. 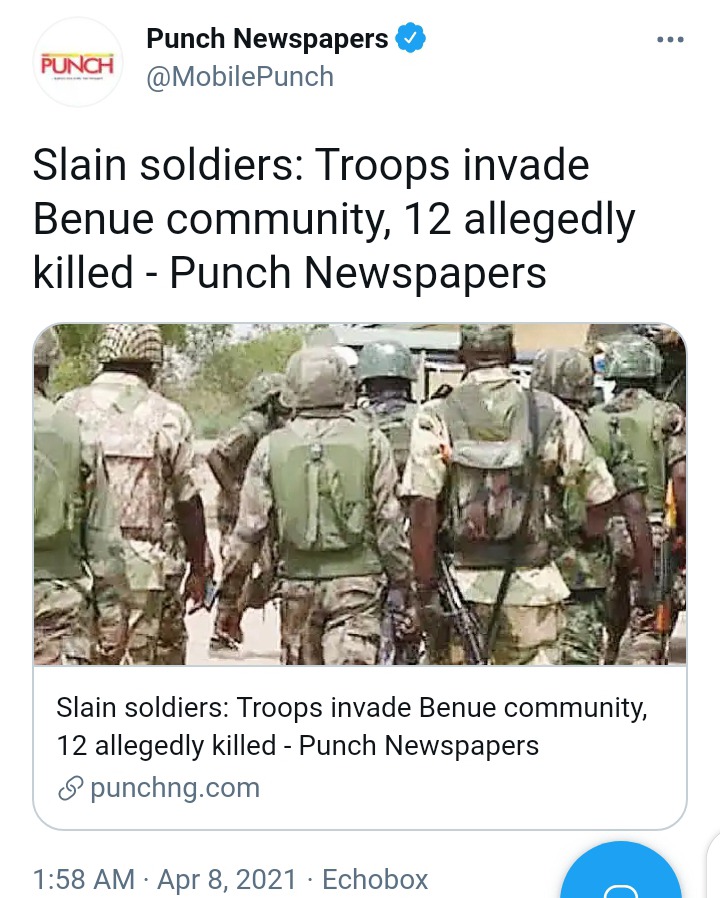 AT least, 12 persons were on Wednesday killed by troops of Operation Whirl Stroke, who invaded Bonta community in Konshisha Local Government Area of Benue State in search of missing soldiers.

It was gathered that some houses were destroyed by the invading soldiers.

Locals from the area informed our correspondent that some militias had on Monday abducted two soldiers who were on patrol of Bando community in Konshisha council area.

The soldiers were later learnt to have been killed by the local militias, which prompted the deployment of 15 trucks loaded with soldiers to the area on Tuesday.

One of the indigenes, who fled the community, told The PUNCH in a telephone interview that “there has been renewed land dispute between Bonda community in Konshisha and Ukpute Ainu in Oju council area. 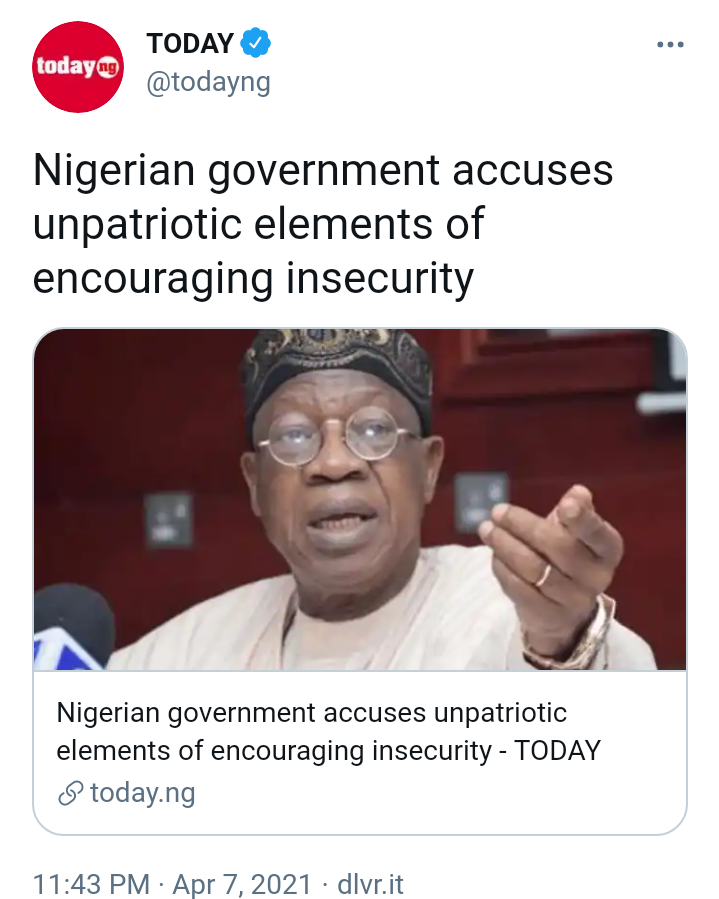 The Federal Government says some unpatriotic elements are encouraging insecurity in some parts of the country.

The Minister of Information and Culture, Alhaji Lai Mohammed stated this at a news conference on Tuesday in Abuja.

Mohammed said the security agencies, acting on the directives of President Muhammadu Buhari were taking concrete actions that will significantly reduce the level of insecurity nationwide.

He assured that the citizens will feel the impact of the security agencies’ actions in the days ahead. 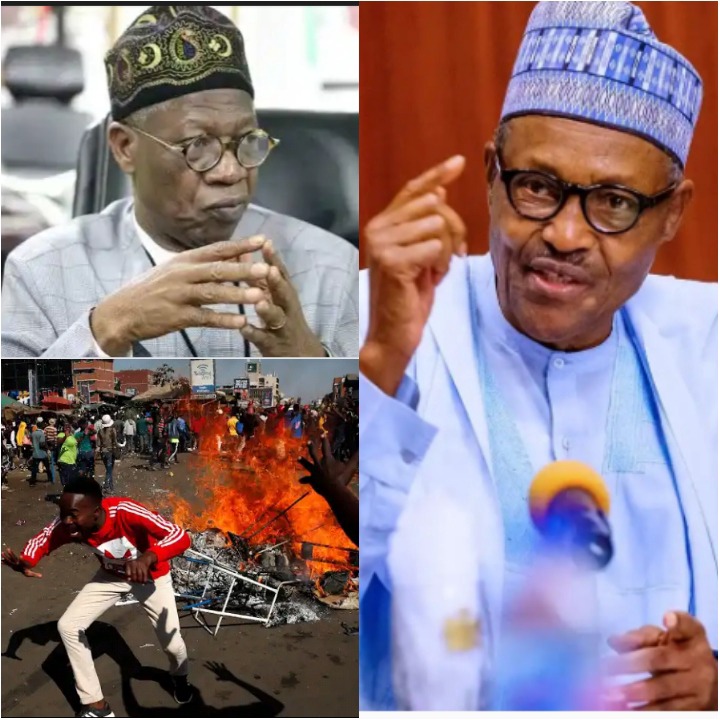 Between Chika Ike, Eniola Badmus, Regina Daniels And Others, Who Rocked The Swimwear Best? (Photos)

"They Told Us They Want To Give Us Jobs, But Took Us To A Hotel In Ondo, Rescued Girls Reveal