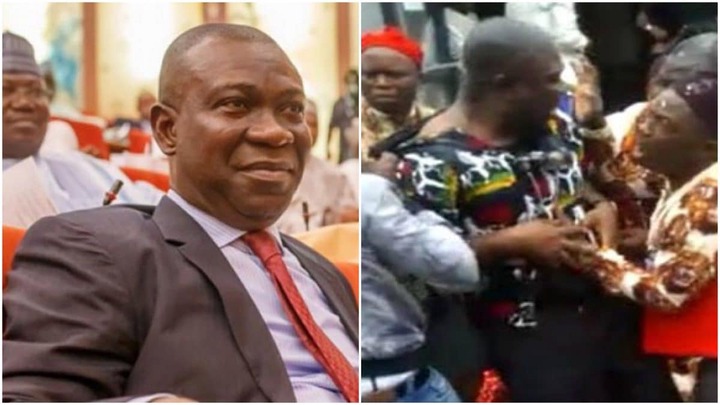 It was late Dr. Chuba Okadigbo who once said that it takes political sagacity to understand the arithmetic of politics. The above assertion is nothing, but the truth. Political events have since proven so.

Senator Ike Ekweremmadu, the senator representing Enugu West Senatorial zone since 2003, has been so lucky politically. It is an understatement to say that he is one of the luckiest and favoured politicians in the Southeast region, if not in Nigeria.

At a very young age even without much antecedents or track-record, he was catapulted from nowhere to an enviable political height within a short period. His political bread was buttered by Senator Chimaroke Nnamani, who founded and nurtured the Ebeano Political Family while serving as the second civilian governor of Enugu State. So Ekweremadu is Chimaroke's boy politically. He is a strong scion, beneficiary and apostle of Ebeano Political Family. This is a statement of fact. No amount of propaganda, hubris or grandstanding can erase or change this axiomatic fact. It is so and has to remain so for record purposes.

I was shocked and surprised when after the 2019 general elections and Ekweremadu's miscalculated and failed attempt to return as deputy Senate President, some data boys and e-rats started flooding the social media space with the slogan, Enugu 2023: Ike is coming. My question then was which one is Ike is coming, even when those who came unprepared and unaccepted some years ago have not recovered from their defeats and colossal losses. Some of them are still being rehabilitated politically and financially today.

Initially, I doubted that Ekweremmadu with his exposure and immeasurable experience in politics would not fall prey to the antics of these political jobbers. As events unfolded with time, it dawned on me that Ekweremmadu was and still the man behind the slogan, Enugu 2023: Ike is coming.

In short, the data boys and e-rats, who have been championing the slogan on social media are his allies and foot soldiers. They openly hobnobbed and romanced with and still romancing with Ekweremmadu and his allies. At a time, they turned themselves to social media terrorists, attacking and disparaging anybody who shared contrary opinions on Ekweremadu's 2023 governorship ambition.

Leading them in this futile outing are Comrade Francis Akpa, Hon. Oke Nwoke, Celestine Okanya, Comrade Obinna Mamah and others.

In desperate bid to please their paymaster, they intentionally, hypocritically and maliciously attacked Governor Ifeanyi Ugwuanyi's administration and impugned his personality on social media, not because his government has not performed or not performing, but because they believed Ugwuanyi is not and will not be supportive of their paymaster's ambition. They turned logic and historical facts upside down and dismissed the implied zoning of governorship seat in Enugu that has made the state stable politically since 1999.

They taunted Ndi Enugu and tried everything possible to hoodwink or bamboozle them with semantics and grammatical gyrations. The more they work hard to achieve this, the faster they fail. The preponderance of opinions on zoning of governorship seat in the state weighed against them and their push for it to be jettisoned or altered.

Suddenly and to their greatest shock, their paymaster, Ike having realised that his 2023 gubernatorial ambition is dead on arrival, made a u-turn, visited, embraced and eulogised the performing and peaceful loving administration of Governor Ifeanyi Ugwuanyi that has enjoyed and still enjoying the massive and unalloyed support of Ndi Enugu and beyond since assuming office in 2015.

Instead of waiting to come to Lion Building, Government House Enugu in 2023 as wished, canvassed and dreamt by him and his social media political jobbers against the abiding zoning arrangement that is accepted to majority of Enugu people, Ike returned to Government House on January 19, 2020 like a prodigal son with some political leaders from Enugu West zone to pledge support and loyalty to Ugwuanyi's government.

Unfortunately for Ike's political jobbers, they were left in the lurch or darkness by their paymaster on the day he returned. What a political abandonment or orphanage for data boys and e-rats. Ike even warned and rebuked them for trying to sow the seed of discord in the state and urged them to desist from engaging in such. Ike don't need to mention their names, because they are known. They are his boys and known social media miscreants.

By the visit, Ike has shown that he understands politics and its concomitant intrigues. He has realised that he cannot do it alone and votes from his senatorial zone, which are not certain and that of his few data boys will not make him governor of Enugu State in 2023.

Ike and his boys have tested the water and saw that there is no way Ndi Enugu will choose Ugwuanyi's successor from Enugu West zone in 2023 against the Enugu East Senatorial zone that is their turn to produce governor in 2023 in line with the established zoning arrangement in the state. No way, it is not in the tradition or character of Enugu people to shortchange themselves in governor, deputy governor and speaker seats. Zoning has worked for them and they are keeping to it in the interest of fairness, peace, justice and equity and finally in accordance with the visions of the founding fathers of the state.

As Ike's sudden return generates debates, some have opined that his visit was a smokescreen, considering that he didn't return with his data boys, political jobbers and some major political leaders from his zone.

To me, that is immaterial in the light of the fact that his political jobbers have no political value, apart from constituting nuisance and distorting facts on social media platforms, forgetting that elections are contested and won at the polling units not on social media platforms. Majority of them have no voter's card not to talk about PDP membership card. Ike knows these and it was not unconnected with the reason he left them in the dark on his return to the Government House to pledge loyalty and support to Governor Ugwuanyi's administration.

He should not allow himself to be distracted by the data boys and jobbers, who have no other job than purveying falsehoods against people on social media platforms as a means of livelihood. As can be seen, since Ike returned, his data boys and jobbers have gone into hiding. The social media space has suddenly became quiet. This is good for Ike and his personality. He does not need to push his luck too far and destroy his God-given political reputation.

Ahead of 2023, Ike should play the role of a father figure and not that of an aspirant or contestant in the state. He should try his luck somewhere or in something else. As a professor, he can easily return to classroom and take it from there. After all, the former INEC chairman, Prof. Attahiru Jega has since returned to classroom at Bayero University of Kano (BUK) as a lecturer.