By Zeddicuss (self meida writer) | 10 months 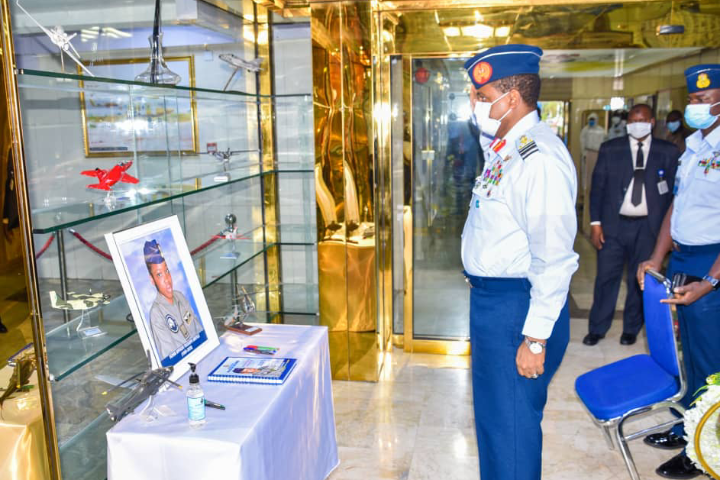 The remains of late Flying Officer Tolulope Arotile, the Nigerian Air Force’s (NAF’s) first female combat helicopter pilot, who died on 14 July 2020, will be laid to rest with full military honours at the National Military Cemetery in Abuja on 23 July 2020. Meanwhile, the Chief of the Air Staff (CAS), Air Marshal Sadique Abubakar, has received some members of the Federal Executive Council as well as members of the National Assembly who visited him at Headquarters NAF at various times yesterday, 16 July 2020, to condole with him over the unfortunate demise of the young NAF pilot. Among them were; the Honourable Minister of Women Affairs, Dame Pauline Tallen, as well as the Honourable Minister of Information and Culture, Alhaji Lai Mohammed. The joint delegation from the upper and lower houses of the National Assembly, comprising 20 members, was led by the Chairman Senate Committee on Air Force, Distinguished Senator Bala Ibn-Na'Allah, and the Chairman House Committee on the Air Force, Honourable Shehu Koko. 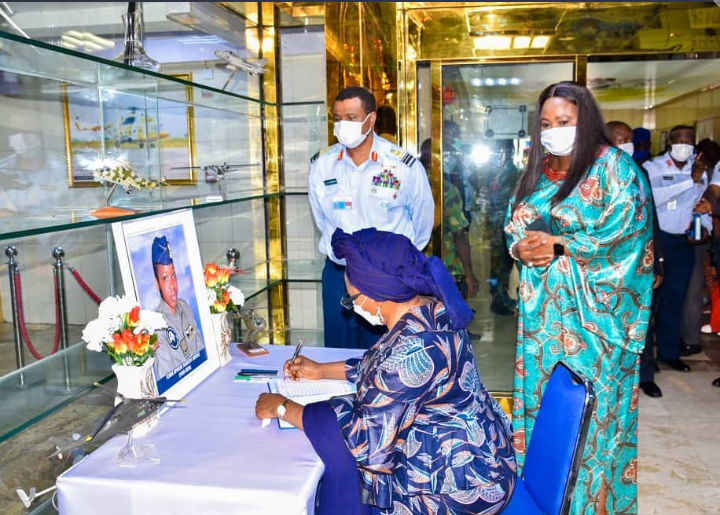 Speaking during her visit, the Honourable Minister of Women Affairs, Dame Pauline Tallen, who was accompanied on the visit by the Director-General of the National Council for Women Development as well as leaders of some other Women’s Groups, said she received the news of the death of Flying Officer Arotile with great shock, from which she said it would be difficult for her to recover. She however noted that the death of the young pilot would not be in vain as she would forever be remembered for her gallantry and contributions towards ensuring a secured Nigeria. The Chairman Senate Committee on Air Force, Senator Bala Ibn-Na'Allah, stated that the Committee, and the Senate as a whole, lacked the words to express how painful her death was to them. He said they were however consoled that there was no greater honour than when one dies while in service to one’s Nation. He described the late Arotile as a dedicated and goal-oriented young woman who lived an exemplary life that was worthy of emulation by other young Nigerians. While reiterating that the Nigerian Senate shares in the pain of the Service as well as that of the Arotile family, he urged the NAF to continue to give opportunities for many young Nigerian girls to realize their dreams of serving their Country as pilots in the NAF.

The Chairman House Committee on the Air Force, Honourable Shehu Koko, on his part, while recalling the day Flying Officer Arotile was winged as the first female combat helicopter pilot in the NAF, noted that they at the House of Representatives, being aware of the many exploits the young officer had made in her short but impactful career, were extremely pained by her passing away but had taken solace in the fact that she had left a lasting legacy. He therefore urged the CAS, and through him, the family of the deceased young officer to be consoled by the good deeds she left behind. 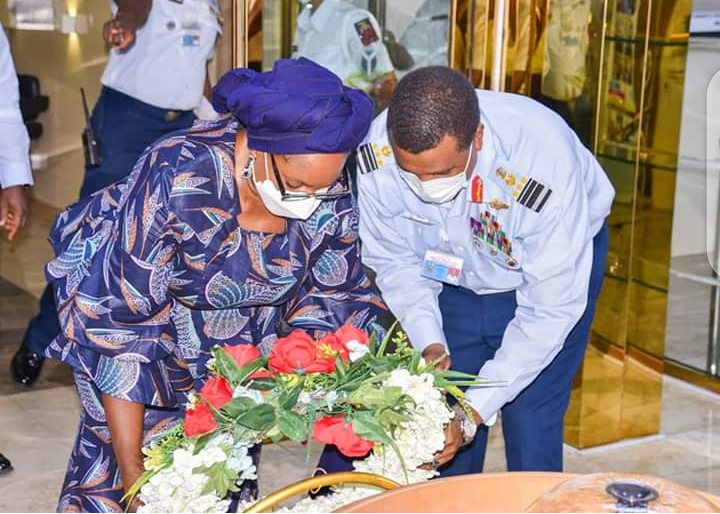 In his response during the visits, the CAS expressed his appreciation to the esteemed dignitaries as well as all Nigerians for their overwhelming show of support to the NAF over the passing of Flying Officer Arotile. He noted that the NAF would never forget her, not only because she was the first female combat helicopter pilot in the Service, but also because of her legacy as a very intelligent, highly committed and extremely patriotic officer who excelled in virtually every endeavour.

Air Marshal Abubakar recalled how, while on basic helicopter course in South Africa, she was selected, because of her excellent performance, to undergo a more advanced flying course on the Agusta 109 Power Attack Helicopter in Italy before returning to finish the basic course along with her other colleagues in South Africa. Such, the CAS said, was her commitment to excellence on the job. 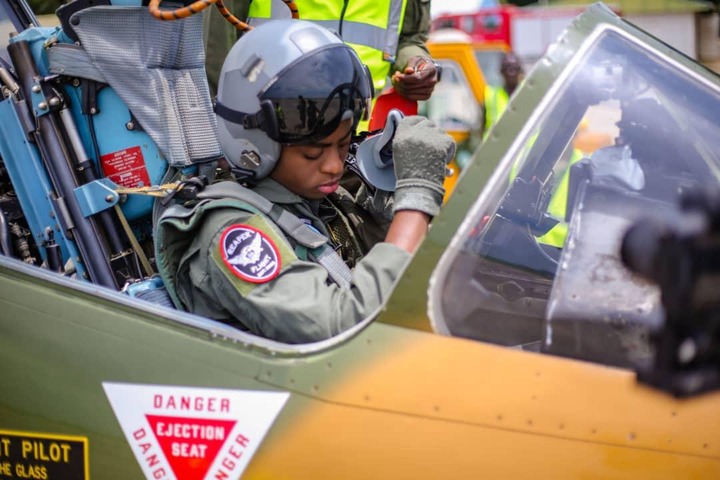 “This was what gave us confidence to assign her to introduce the Agusta 109 Power Attack Helicopter to the President, Commander-in-Chief of the Armed Forces of Nigeria, President Muhammadu Buhari, during the induction ceremony at the Eagle Square in Abuja on 6 February 2020; which she did excellently”, he added.

Speaking further the CAS noted that Flying Officer Arotile had left her mark in the sands of time which he said proves that when it comes to displaying excellence and adding value to the society, age or gender should not be barriers. 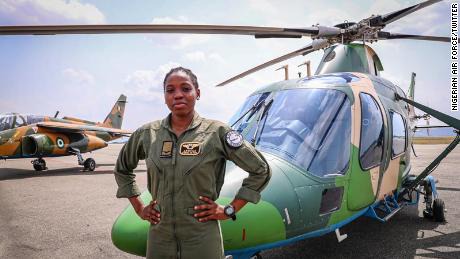 He noted that her contributions through combat missions conducted, along with her colleagues, in the fight against armed banditry and other criminal activities in the country would also never be forgotten. He disclosed that the NAF would therefore continue to give equal opportunities to female officers in terms of training, noting that a total of 11 female student pilots were currently undergoing flying training both within and outside Nigeria.

While reiterating the huge loss Flying Officer Arotile’s death was to the NAF, Air Marshal Abubakar noted that the Service would continue to be consoled by the legacy she left behind. He further assured that the NAF, in honour of her memory as well as all those who had paid the supreme price before her, would continue to work assiduously to ensure success in the fight against terrorism, banditry and other security threats for the overall peace and prosperity of a united Nigeria. 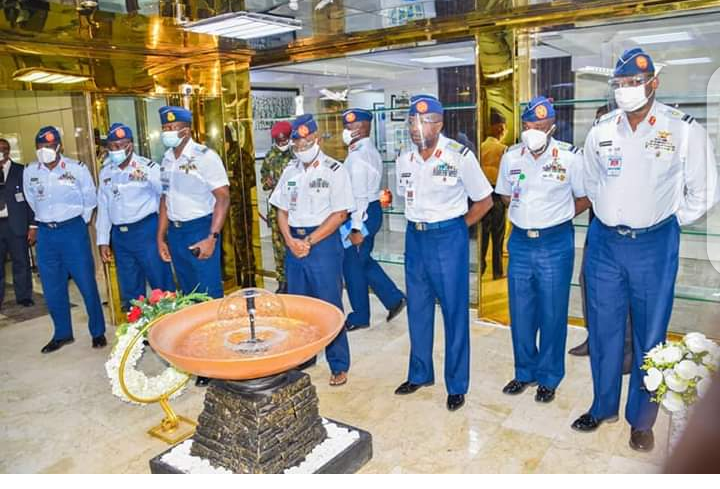 Meanwhile, a condolence visit to the Arotile Family in Lokoja by a high-powered delegation, composed of the CAS, Honourable Minister of Women Affairs as well as the Chairmen of the Senate and House Committees on Air Force, has been scheduled to hold on a date before the burial.

Say These Prayers To Ask For Forgiveness Of Sin From God

Lovely Photos Of Actress, Uche Nnanna With Her Husband And Children

Lionel Messi Makes History In La Liga After He Scored His 30th League Goal Of The Season.