COVID-19: Over 5,000 vulnerable persons and widows get Ben Ayade's Palliatives 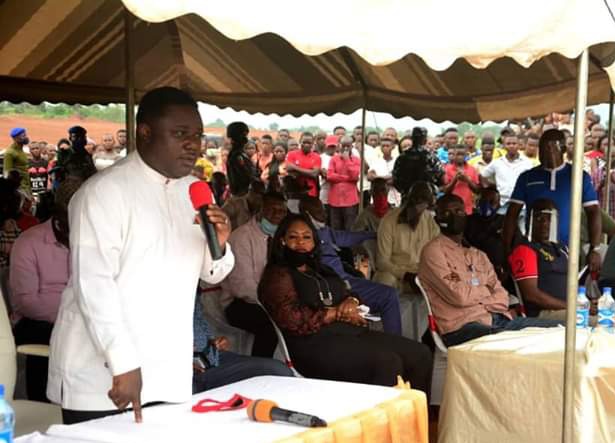 Cross River State, Government has donated Palliatives to over five thousand widows, old and vulnerable persons as part of efforts to cushion the effect of the COVID-19 (Coronavirus) pandemic in the State.

The people who were full of joy, chanted and sang songs in honor of His Excellency, Prof Senator Benedict Ayade, saying, "we have never been gifted in this LGA by any Government".

While presenting the items on behalf of the the Governor, Prof. Ben Ayade, and addressing Ward Counselors at Obanliku LGA, the Commissioner for Humanity and Social Welfare, Honorable Blessing Egbara said it gives her Joy to see and know that People are Happy and cared for.

According to Egbara, "this project reflects Governor Ben Ayade's true intentions for his people.

"The exercise which has seen thousands of relief materials being distributed to the Vulnerables, Aged and Widows in Obudu LGA, has now been moved to Obanliku LGA with over two thousand beneficiaries."

While assuring that, the Palliatives will be spread across all 5 local governments in the North Central, the Commissioner told the Ward Counselors, "now that we have the opportunity of relating with those who are down at the grass root, I think you should be able to provide a Data for the disabled so that we can provide wheelchairs to them"

Speaking on starting the Exercise in a new Local Government, the Honorable Commissioner for Humanity and Social Welfare revealed that indeed it is a great feeling to be able to hand over the palliatives to the Vulnerables, Aged and Widows themselves.

"As you can see, the turn out has been massive, ward by ward and the people are trooping out in their hundreds to receive the relief items", she added.

Findings have it that, despite the ongoing Communal crisis between the People Of Obanliku and Tiv, it still didn't hinder the project from reaching various Wards in Obanliku.

Earlier, Bendi 1, Bendi II, Bisie and Becheve wards all benefited from the Palliatives during Day-1 of the Excersise while in Obanliku, Day-2 saw the remaining 6 wards Covered, as the Ministry of Humanity and Social Welfare seeks to touch down Bekwara Local Government next.

Speaking, one of the beneficiaries, Undieh David thanked the Governor, saying "I am short of words, in fact I have never come across such a thing like this, we only hear that things like this happen but it never gets to us, I am so happy today and I pray to God that where ever His Excellency laid his hands to provide this for me, I pray the Almighty God replenish him in double folds."