By Mounique (self media writer) | 18 days ago

In the words of the great French poet, Victor Hugo, “no army on earth can stop an idea whose time has come.” On Saturday September 25, 2021, Ndi Anambra became witnesses to the truth of this assertion when a record-setting crowd turned up at Alex Ekwueme Square Awka to flag-off Chukwuma Soludo’s gubernatorial campaign.

It was a rainy day. The rain came in the morning with the intention of keeping the day company for a long time. It kept its resolve beyond the usual mid-day mark. But neither the early morning rain nor the battery of lawsuits that trailed the party primary could stop Ndi Anambra from trooping out in their largest imaginable number to acknowledge Chukwuma Soludo as an idea whose time has come. 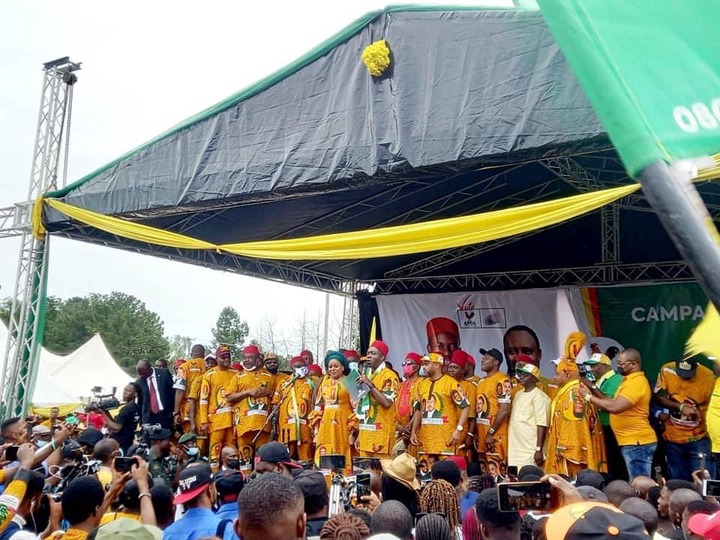 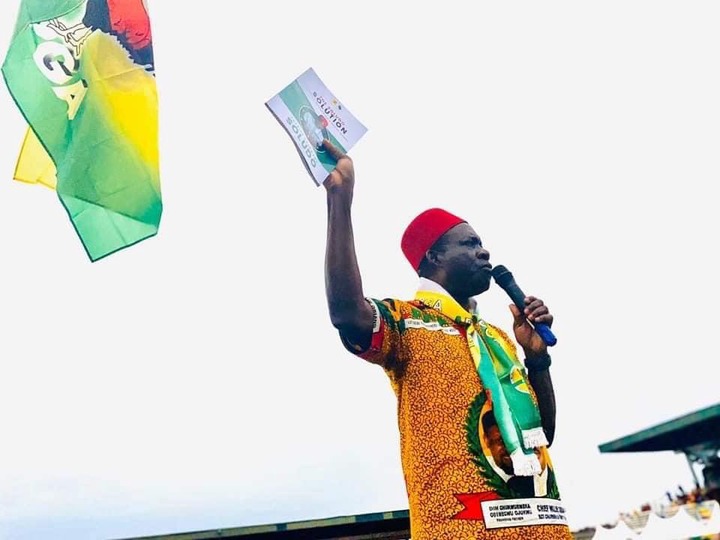 Indeed, neither rain nor lawsuits could get in the way of the people’s resolve to march into a new phase of possibilities with a man whose genius has been acknowledged from the rustic charms of Isuofia to the rarefied halls of Harvard University and beyond. The stakes are that high, you see?

And so they defied the rain; drumming, dancing, making merry and chanting war songs. War songs kwa? Well...don’t be surprised. Yes, election is war! It is a war fought without firearms! It is a war fought with voting cards. They came from all the 21 local government areas of the state. They wore bright party colours and waved party flags high above their heads. They came with totems of their manifest will.

Masquerades pranced around in frenzied excitement. Dancing troupes swayed to the rhythm of delirious songs. There was a silent rivalry between groups as they strove to outdo each other in a display of verve and panache. Ekwueme Square soon became a full-moon of colours. Yes. The people were on the march again. This time, they marched with confidence, with assurance and with hope. The signs were there.

The moment everyone was waiting for soon came. Prof Chukuwma Soludo and his deputy, Dr Onyekachi Ibezim arrived to a warm reception from the crowd. Then came the Governor of Anambra State, His Excellency, Chief Willie Obiano and his delectable wife, Ebelechukwu.

As they marched around the venue, acknowledging cheers from the crowd, it became clearer to everyone that the phoenix had risen again from its ashes…APGA; the proverbial cat had shown that it was nowhere near its ninth life. All fears that the party’s internal disputes which were majorly induced by the opposition camp would affect party loyalty and enthusiasm vaporized to thin air. But what many observers saw astonished them. They saw a moving train that was bound to outrun its rivals once it gathered speed. They saw APGA in its finest hour! 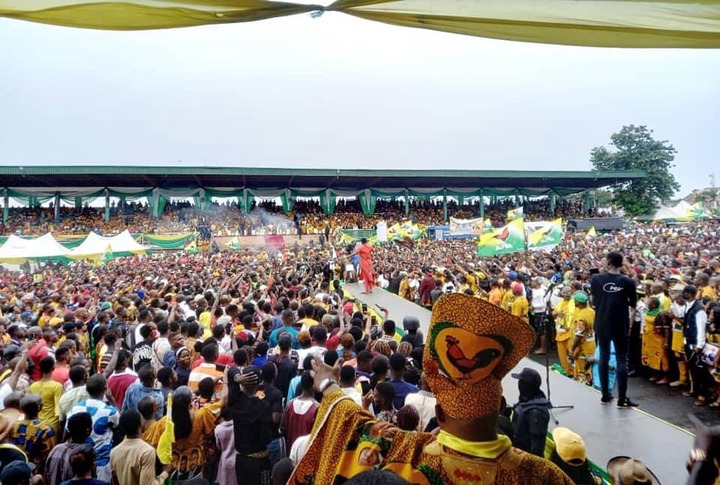 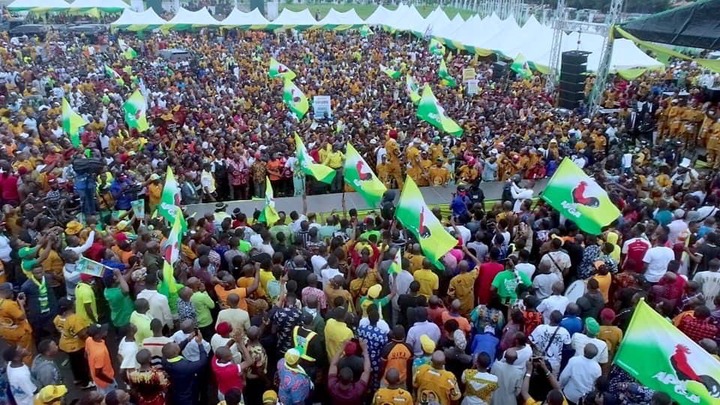 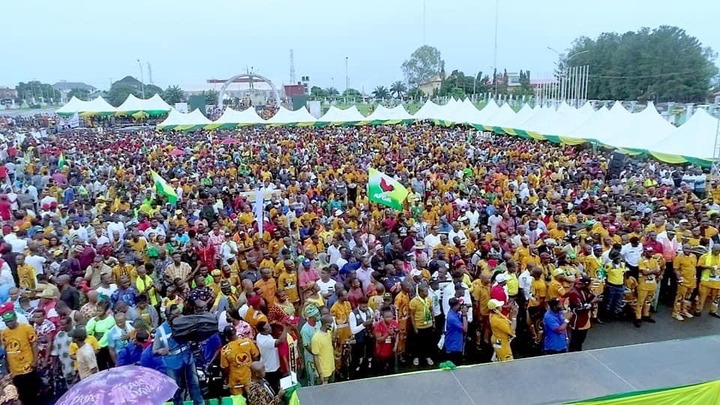 The wife of the governor, Chief Mrs Ebelechukwu Obiano also stepped up to wow the crowd. But everyone waited with baited breath when it was time to present the party flag to Prof Soludo. It was a historic moment; made more historic by the audacity of governor Obiano’s stellar achievements and the hope that a Soludo victory at the polls was bound to lead to loftier accomplishments. Yes, the stakes are that high, you see?

His face beamed when he held the flag high and let it flutter in the wind. The elements had to bear witness to the moment too. It had taken him several years to finally hold that flag in this arena; standing tall with all eyes on him. He had lost money, suffered pain of disqualification in silence but he never lost hope. And now, it was his time.

His moment. His deputy governor candidate, Dr Ibezim stood beside him, smiling into faces in the crowd. Soludo’s acceptance speech carried the hope of a new Anambra. The manifest will of the people to reject a life of average; to step into a position of strength. He showed the readiness of a leader who knew exactly what his people needed at the moment and what to do about it. He lifted up his manifesto and announced that it was his social contract with Ndi Anambra. He brandished a whole booklet of revolutionary ideas that he said would lead Anambra to an amazing spot in history where youngsters who graduate from universities across the country would head to Anambra for self actualization instead of the usual destinations of Lagos and Abuja. His speech was well received by the crowd of passionate supporters who had come out to re-assure him that they would not leave any stone unturned to give him victory on November 6, 2021.

When Governor Obiano finally took the microphone, he knew just what to say. The crowd waited to hear every word that dropped from his mouth. But excitement rippled through the crowd when he recalled that his predecessor did very well and he had performed better than him but that Soludo would surpass what he and his predecessor had done for Anambra State. He showed rare humility when he told the crowd that Prof Soludo knew where to look for help that would uplift Anambra State better than himself. The import of that self-effacement and humble admission on a huge stage and live television was not lost on the party leaders and the highly appreciative crowd. 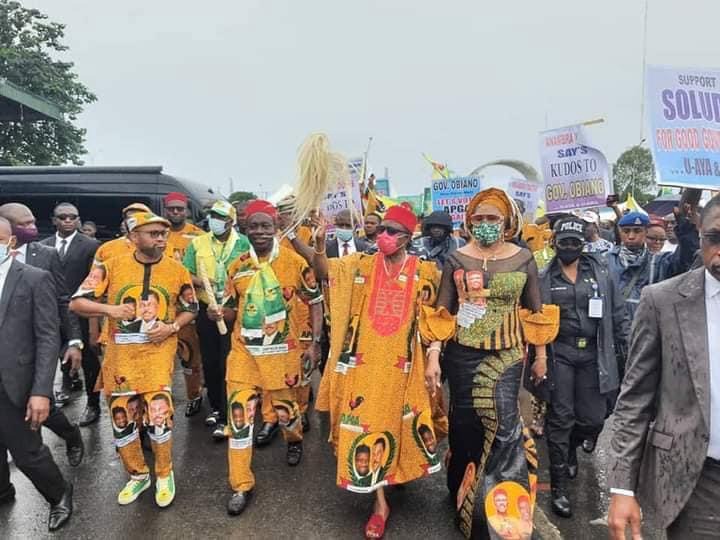 Finally, it came to a glorious end. But it was not an end at all. It was actually the beginning. And as the crowd dispersed from the venue, they went away with two things. One; they were assured that their beloved party, APGA remains the strongest party going to the polls in the November 6, 2021 gubernatorial election in Anambra State and two, they became more certain that the momentum was behind Prof Chukwuma Soludo.

But the question remains; With the APC waving strong in Anambra, Is there really a chance for the Erudite Professor of Economics?