A master's degree holder is now a scavenger in Lagos state.

A Nigerian man Yazid Surajo, a master's degree holder in Development Studies from the Bayero University, Kano state, born and raised in Karofi town of Dutsinma Local Government Area of Katsina state in northern part of Nigeria is now a scavenger in Lagos state.

Yazid Suroja who said he went into scavenger work because he didn't want to stay idle waiting for white collar job had his primary school Karofi Model primary school from 1996 to 2002, from there he moved to GSSS, Karofi, from 2002 to 2008. He then proceeded to Umar Musa Ya'adua in Kastina,to study History which he graduated in 2010.

Suroja's father who was a police inspector died in 2010, while Suroja was in school. Life became hard as the family struggled was incapable to have access to the deceased entitlement. According to Suroja, he said it took 10years before the Police service commission finally released N3.5 million which was half the deceased entitlement to the family.

After the completion of his 1st degree and the National Youth Service Corp(NYSC) in Osun state, he began to think of the next step for him. Luckily for him he was selected among the batch A of N power beneficiaries under the National Social Investment Programme, beneficiaries in the scheme were paid N30,000 monthly.

It was after the exit from the Programme that he went to Lagos in search of a job, after his application for numerous white collar job but to no avail, the graduate then venture into the scrap business.

In his statement, the young graduate said; "If you want to achieve something great in life at least you have to be self determined and dedicated, I made a decision to myself not to stay idle after I concluded my national service in 2016".

" Many of my childhood friends use to go to Lagos so I never hesitate to follow them. Some said I was not fit for the business because it was a stressful kind of work that requires energy. Those that knew me well and my attitude knew that I could endure 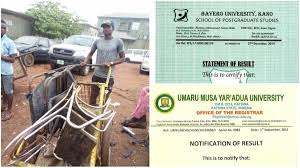 any kind of challenges that I encounter".

He went to the street to look for scraps, some of which he bought with his master's money which he couldn't afford, come back to his master who is called Dandogo to measure the scraps which he has purchased, the master will take out his money and give them their gain. This was how they did the scrap business daily.

"After a year or two, I became use to the scavenger business, I gave it more attention because securing a job in this country needs connection".

Yazid Surajo advised the youths to be hard working and not be involved in criminal and illegal activities.

Content created and supplied by: Ranni003 (via Opera News )