By Sportivation (self media writer) | 2 years ago

Arsenal Academy Coach in Dubai, Marcellinus Anyanwu has hailed friends and family for their support at his Father’s Burial Ceremony. 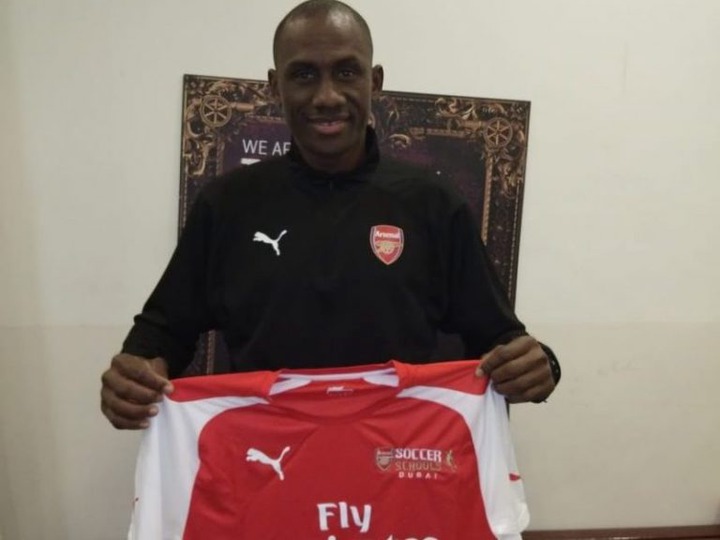 “I am grateful to all my family members, friends and everybody that provided one level of support or the other before, during and after the Burial ceremony of my late father. Marcellinus told Sportivation Media

Below is the Funeral Oration of Late Mr Felix Uchobi Anayanwu

He married to his beloved wife Mrs. Esther Anyanwu (NEE OSUJI) of Owalla Uratta in Owerri North LGA and was blessed with 2 sons and 5 daughters

NNA ANYI UKWU Anyanwu retired in 2011, He loves God ,he was a devoted catholic who held so many positions in the church, A community leader, Academician, Football Enthusiasm ,displinarian and a seasoned Administrator

The beauty of Ikeduru has been desecrated by the cold hands of death, an illustrious son of umuidi Amambaa Uzoagba has received his summons to join ‘The Innumerable Caravan that moves to that mysterious realms where each shall take his chamber in the silent hails of death.’ Naked I come from my mother’s womb, and naked I will depart, the lord gave and the lord has taken away-Job 1 vs. 21

The school teacher has answered the home call, he has approached the grave like one that draws the drapery of his couch about him and lie down to pleasant dreams’

Our Father- Eulogy to a good and peaceful man from the greatest generation who passed away on THURSDAY 27th of Feb, 2020

Our father was a teacher of all things, his method was simple

He impacted greatly to our generation. He was a popular teacher per excellence

Our Father was emotionally attached to reading, listening to news and watching football

He thought by Example, his character was a foundation of his conscience

Our father was strong in body, in spirit and in commitment. He never let another man down, he fulfilled every obligation, his word was his bond and everyone knew it

Our Father loved a good joke, he loved my mother, and my siblings that was why he gave us a befitting Education

Our father stood for peace, truth .equity and fairness. He has strength like Eagle. He was ready to take any challenge; he was embodiment of profound Knowledge, insight, foresight and wisdom.

He was an intelligent man endowed with calmness, grace and peace that can only come from God Almighty .No matter the angle from which it is viewed ,our father will be remembered as a man who stood up to be counted when it matters most

We never saw our father drunk or violent; on the contrary he was a conservative man.

Our father was simply put ,my hero ,he spent his life in service and working for people .He could have used his considerable ,powerful intellect chasing down wealth and power .and I have no doubt that he could have acquired both. But instead he chose to serve.

Our Father was one of the smartest people I’ve ever known and he chose a life of service. And more than that, he had a fundamental and powerful respect for the people he served.

‘Blessed are those who mourns for they shall be comforted- Mathew 5 vs. 4

Oh, our father ,we mourn for you, oh our hero, we wept for you.

To leave us at this stage of battle is a bitter pill to swallow. But man cannot stay the hand of destiny.

Fare thee well, our mentor. The candle of integrity that you have lit shall never. Never be quenched

My thought are now on with Edna St Vincent Millay’s ‘Dirge without music.” The last stanza of which reads

Down. Down down. Into the darkness of grave. Gently the go, the beautiful, the tender, the kind: quietly the go, the intelligent .the witty, the brave. I know but I do not approve and I am not resigned

HE IS SURVIVED BY HIS WIFE

Thank you Dad for being the most incredible father I could have ever wanted, If there is reincarnation I will like you to be my father, I love you MPAM and I’ll miss you more than I can say

May your gentle, peaceful and truthful soul rest in peace AMEN

Content created and supplied by: Sportivation (via Opera News )