It's just two months away to the much anticipated Edo 2020 gubernatorial election slated for 19th September, 2020. It's the most trended election in 2020 because of the underlying power play and it's intrigues. 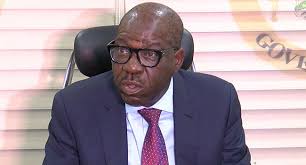 The Edo 2020 will be unprecedented and historical because having escaped the political onslaught of the APC, the sitting governor like his counterpart in Benue State found a soft landing in the opposition to be used as a launching pad.

This is another election that Nigerians will not forget in a hurry. It could be akin to a Presidential election because it's going to a political war between the juganuts. The battle for the soul of Edo State between an ex political godfather and his estranged political godson. It's going to be a battle between two elephants where the winner takes all. A battle of great political permutations and strategic planning leaving no stone unturned. It's a must win for the gallant sitting governor who dared the lion and took the battle to the opposition.

During this political contest, a winner must emerge at the end of the day. Nowadays, the courts are the final arbiter of election results and not the Independent National Electoral Commission, INEC. The political warlords understoo this very well too.

As a matter of fact, both the APC and PDP must be putting final finishing touches for legal fireworks if the result at the polls go the other way. So the 19th September polls is not the final arbiter. It's just the launching ground.

Expectations are high that the sitting governor may win the return ticket. There are indeed reasons to buttress this fact. It's no longer news that Adams Oshiomole has withdrawn his support for his anointed candidate Pastor Ize Iyamu whom he had called a thief during the 2016 gubernatorial election in the state. The APC constituted a 49-man election committee headed by the governor of Kano State Abdullahi Ganduje. The PDP reciprocated this with a 90 member election warriors headed by the no nonsense governor of Rivers State Nyesome Wike. It is believed that the Edolites will prefer to go with Wkie's group rather than Ganduje.

The Edo 2020 election will witness many election observers who will be eager to hear the outcome of this titanic election in a state where political godfatherism is on the brink of extinction.

In the eventuality of an Obaseki victory, there would be fatalities. In other to ensure that Obaseki does not lose at the courts, he must win convincingly and get his legal teams battle ready to counter any infringement.

Adams Oshiomole is one of the gladiators in this election and not the Ganduje team. The governor of Kano has nothing to lose in this epic war in Edo State. He was able to wrestle his victory out oo the hands of the opposition in his state when all hope his victory at the polls was almost gone. This is not the best of times for Adams Oshiomole as far as this election is concern. His suspension as the National Chairman of the ruling party had been affirmed by the Appeal Court in Abuja. He has been restrained from seeking legal redress and must maintain the status quo. His National Working Committee had been dissolved by the president Muhammadu Buhari and a caretaker committee put in place. He has no voice in this forth coming election. He knows what the outcome would produce.

The emergence of Godwin Obaseki's re-election in the Edo 2020 election would change the political climate of Edo and usher in an era no " No godfatherism." This will set a long time precedence in the political historybif Edo politics and would be a reference point. The political godfather of the ruling APC would lose relevance in the state and return to his shell.

A new political champion will emerge and strength the PDP. Losing APC to PDP may not be too pallatable for the ruling class because of the 2023 elections. Adams Oshiomole may take a clean break from partisan politics like our former president Goodluck Jonathan did this year.

Godwin Obaseki may open the books for judgement and justice to be served. Adams Oshiomole may be called upon to explain certain infractions during his right years rule in Edo State. A good example is the indictment report on the Edo Specialist hospital which is still in court.

This is bad politics in my own opinion but the pendulum may swing in that direction. This will further set a template of probity and accountability in governance in the state.

If Obaseki eventually win this election, he may serve for just one term to complete his second term in office. As a result of this, he will enjoy massive support party members and prepare the ground for some of those PDP gubernatorial candidate to continue from where he stopped.

This is my candid opinion on the outcome of this Edo 2020 election. I stand to be corrected in the comment section. You are free to contribute your own opinion too on the subject matter.

Content created and supplied by: Tunny2000 (via Opera News )