By EntertainmentRock (self media writer) | 7 months ago 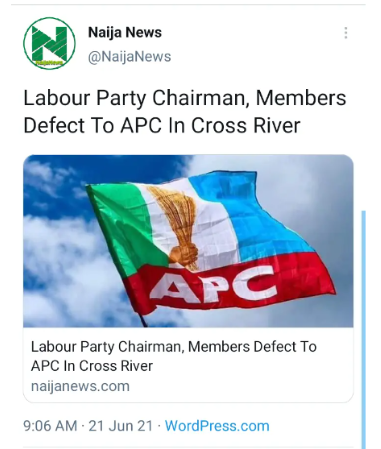 News about the defection of politicians was made public in a statement issued by the publicity secretary of APC named Bassey Ita of Cross Rivers State.

He disclosed that Cross River has witnessed a massive increase as the Chairman of Labour Party with some of his members has joined the APC Chapter of Cross Rivers State.

Bassey Ita had also disclosed that those who defected from Labour Party were received by Senator Matthew Mbu Jr who is the party chairman of APC in Cross Rivers.

Bassey Ita also disclosed that the defectors were accepted at Marian Road Secretariat of the All Progressive's Congress (APC).

The now-former Labour Party chairman of Cross River who defected to APC has revealed that he left Labour Party because his party could no longer sustain the doubts and resentments against Governor Ayade's tenure. 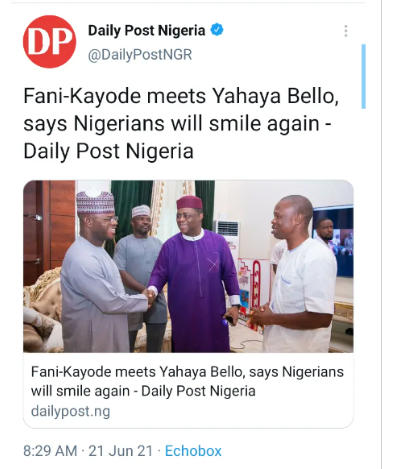 Human Rights Lawyer and Former Aviation Minister, Femi Fani-Kayode (FFK) has assured Nigerians that they would have reasons to smile again.

He disclosed this on his official and verified Twitter handle, whereby he also announced that he met with Governor Yahaya Bello of Kogi State Governor.

The center of his meeting with the Kogi State Governor appears to be about the current state of Nigeria as a nation.

FFK also disclosed that the outcome of the meeting he had with Governor Bello would be disclosed in subsequent times.

He said "Nigerians will have every reason to smile again" as he expressed his optimism that's amid the current crisis bedeviling the nation. 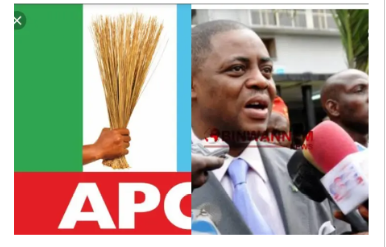 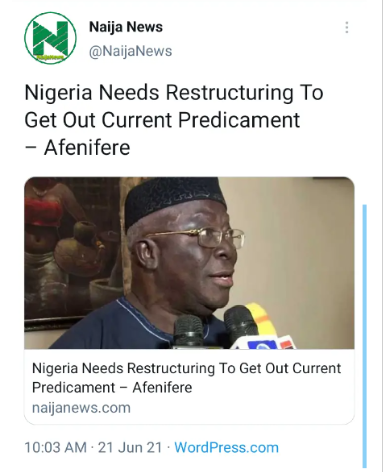 Afenifere has reacted to President Buhari's position on the restructuring of Nigeria.

Sola Ebisenni who is Afenifere's Secretary General disclosed that the country needed to be restructured to get out of the problems Nigeria is facing.

Afenifere which is known to be a Yoruba Socio-Political organization has officially criticized Buhari over his recent position for the call for the restructuring of the country. 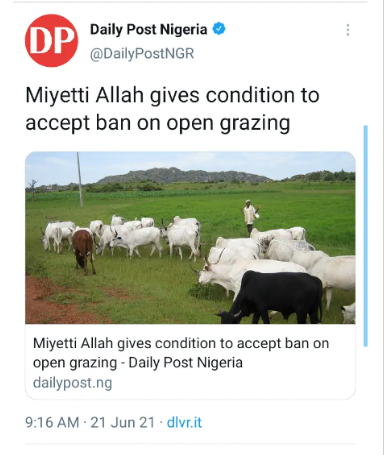 Miyetti Allah has said that the ban on open Grazing by the southern Governors in Nigeria wouldn't be effective until there's an alternative to open grazing to herders.

Gidado Siddiki, South East Chairman of MACBAn made this statement as a reply to the call of Dr. Okwesilieze Nwodo who is the former National Chairman of the People's Democratic Party.

He made this statement on all the House of Assembly in southeast Nigeria to put in practice anti-grazing law in their respective states.

Siddiki also said that open grazing should have not been banned, but due to the public hearing on the constitution review.

It states that its review should grant all parties the right to make submissions for a law against open grazing.

Content created and supplied by: EntertainmentRock (via Opera News )