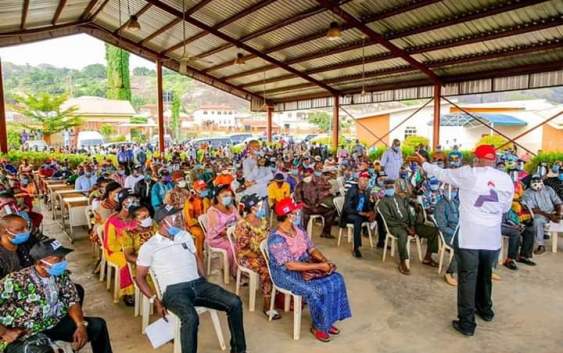 Ahead of the July 20 governorship primary election of the All Progressives Congress (APC) in Ondo State, the state Governor, Oluwarotimi Akeredolu, SAN, yesterday visited six local government areaa to woo delegates in the central senatorial district of the state.

The Governor was accompanied by one of the President Muhammadu Buhari’s ministers, the Minister of State for Niger Delta Affairs, Senator Tayo Alasoadura and other leaders of the party in the state to the six local government areas in the central senatorial district.

Also on the entourage of the Governor was the immediate past President of the Nigerian Medical Association (NMA) Dr. Dayo Faduyile who was also an aspirant under the platform of the APC.

In Ifedore Local Government Area, Governor Akeredolu led the people to observe a minute silence in honor of the late commissioner for Health, Dr, Wahab Adegbenro who was one of the leaders in the local government.

The Governor sought the support and votes of the delegates in the July 20 governorship primary election of the party.

The speaker of the state House of Assembly, Rt. Hon. Bamidele Oleyelogun, who also hails from the local government area, said the delegates will support and vote for the Governor as a result of the various developmental projects done by the Akeredolu administration, which he said are visible for all to see.

He noted that the construction of Igbara-Oke road, Ibuji Road, Isarun Road and Ijare Road among others have brought development to Ifedore Local Government Area.

In Ondo West, Governor Akeredolu said his administration has committed a lot of resources to the development of the University of Medical Science Teaching hospital, adding that no fewer than 18 courses have been approved for the institution as facilitated by his administration.

While seeking the support and votes of the delegates in Ondo East Local Government Area, the Governor said the work done by his administration is enough for the party to campaign and win the October 10 governorship election.

In Idanre, Arakunrin Akeredolu said within the first year of his administration, many roads were constructed in the town, adding that the alternative 15km Idanre – Ijoka road, which was planned and constructed by his administration, is enough to show for the people of the hilly town.In Akure North and Akure South local government areas, Governor Akeredolu thanked the delegates for always standing by him.

He assured them that the dividends of good governance seen in the construction of roads and blocks of classroom in the public primary schools will be a tip of the iceberg if re-elected for another four years in office.

A statement signed by the governor’s Special Assistant on new media, Richard Olatunde indicates that the Governor was received with fanfair by the delegates and leaders of the party in the six local government areas in Ondo Central Senatorial district.