Read About The Resolute Desk In The U.S. Oval Office, Was A Gift From The Queen Victoria Of England. 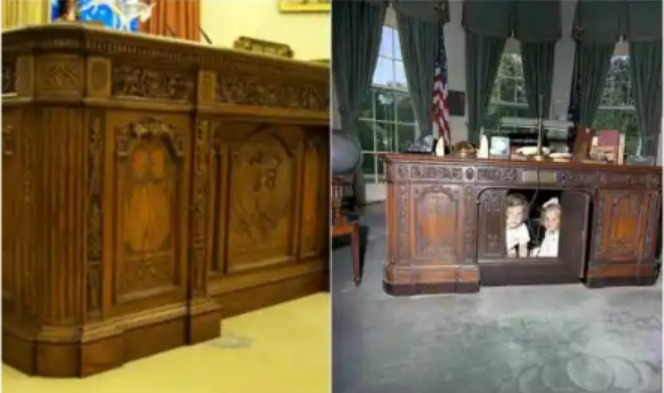 The history of “The Resolute Desk” started like this. When Sir John Franklin, an experienced explorer, and a Royal Navy officer left Britain in 1845 with a mission to explore the Arctic coastline and never returned. 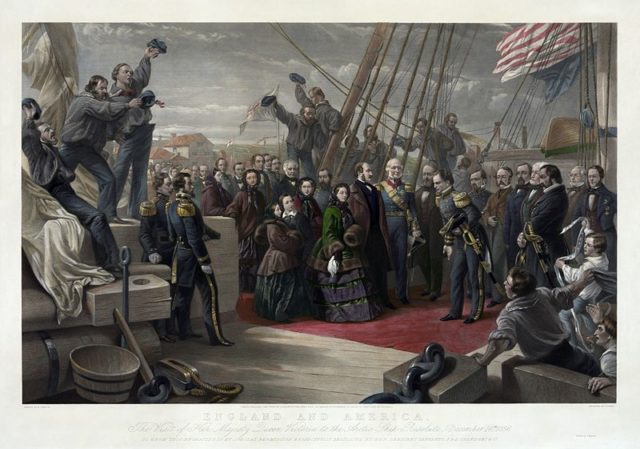 Queen Victoria visits HMS Resolute, December 16, 1856, the day before the ship was granted to her as a good will gesture.

With his two ships, the HMS Erebus and HMS Terror stuck in ice, ill fate found both the captain and his men. Three years after their departure, the British government sent a search party of several ships looking for the lost sailors. 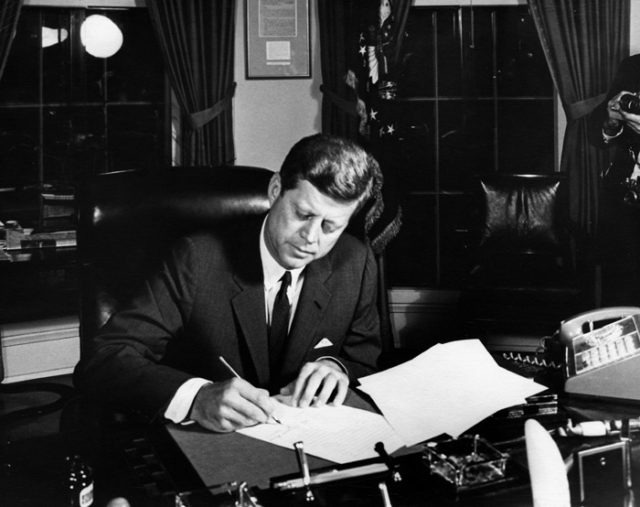 Among those ships was the specially designed HMS Resolute, which was purchased in 1950 and sent to the eastern Arctic, only to discover the remains of a camp that the unfortunate seamen had built. The Resolute was sent on its second mission in 1852, and one year later, the ship suffered the same fate as the two vessels it was searching for. Trapped in ice, the abandoned ship remained in the Arctic until it was found by an American whaler in 1855. 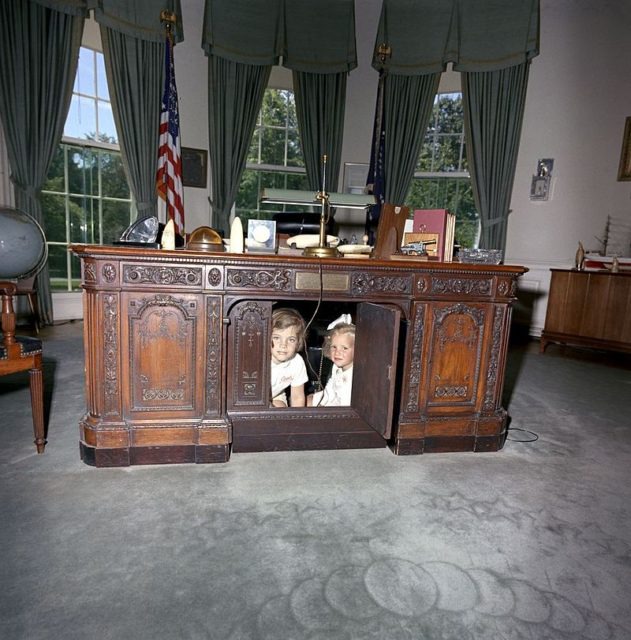 Caroline Kennedy and Kerry Kennedy beneath the desk in 1963.

The captain of the American vessel sent half of his crew to the Resolute, and by 1856, the ship was returned to Britain, where it was presented to Queen Victoria as a commitment token. The ship served in the British Navy until 1879, and after its retirement, the British government ordered three desks to be made from the ship’s timber. One of those desks is the Resolute desk, used by the Presidents of the United States. 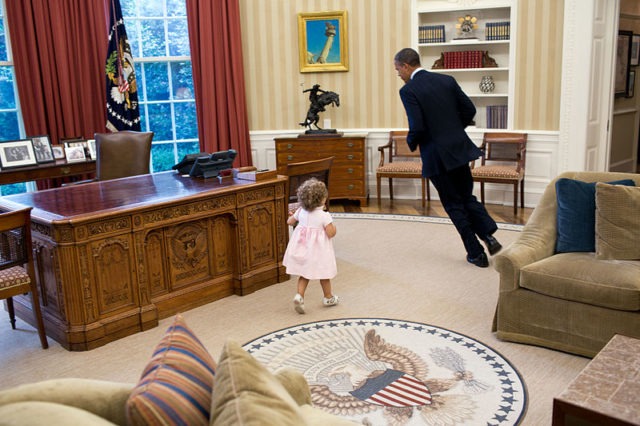 President Barack Obama runs around the Resolute desk in the Oval Office.

The resolute desk was sent to President Rutherford B. Hayes by Queen Victoria in 1880, as a token of gratitude for the American help in the searching missions. The desk was built by the cabinet makers at the Chatham Dockyard in England. The original designs were made on 9 September 1879, and are now kept in the National Maritime Museum in Greenwich. The oak timber partner desk was kept at the President’s office on the second floor of the White House until 1902 when it was moved to the President’s study in the newly built West Wing. 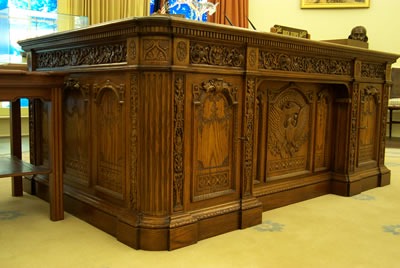 Model of the Resolute desk in the recreated Oval Office at the Jimmy Carter Library and Museum.

President Roosevelt was the first to order a modification of the desk, asking for a front panel at the kneehole so that he could hide his ill legs. In the period from 1948 to 1952, the White House was renovated on the orders of President Harry S. Truman. In this time, the Resolute desk was placed in the Broadcast Room on the first floor. Truman’s successor, President Dwight D. Eisenhower used the desk during television broadcasts. 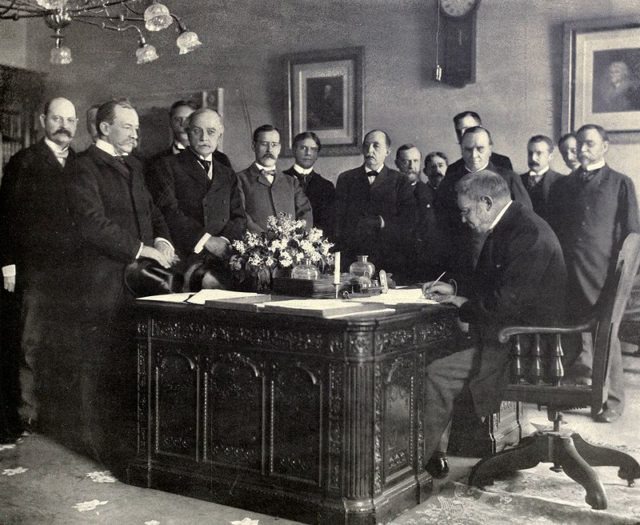 Jules Cambon, the French Ambassador to the United States, signing the memorandum of ratification on behalf of Spain in 1899.

The first time the Resolute desk was placed in the Oval Office was in 1961, as per the request of President John F. Kennedy. After his assassination, President Lyndon B. Johnson chose another presidential desk and gave the Resolute desk to the Kennedy Library traveling exhibition, where it remained from 1964 to 1965. In 1966, the desk was given to the Smithsonian Institution, and in January 1977, President Jimmy Carter returned the historic desk to the White House. Placed again in the Oval Office, it was used both by Carter and President Ronald W. Reagan. In 1989, the desk was moved to the Residence Offices per the request of President George Bush, only to be returned to the Oval Office by President Bill Clinton in 1993. Since then, the Resolute desk has been used by Presidents George W. Bush, Barack Obama and the current President of the United States, Donald Trump. 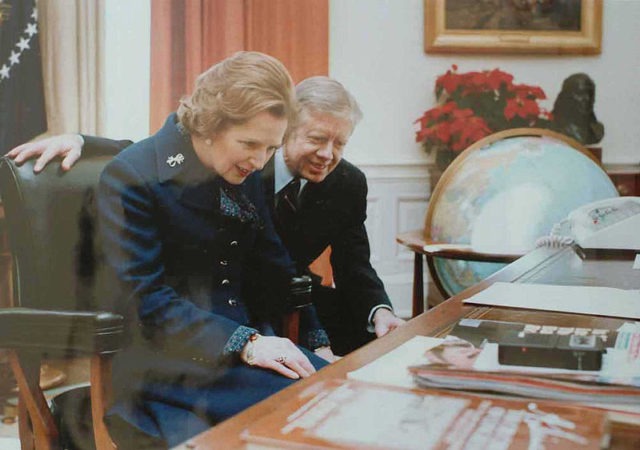 British Prime Minister Margaret Thatcher reads the inscription on the front of the desk in 1979, accompanied by President Jimmy Carter.

The Resolute desk is one of the three desks made from the HMS Resolute timber. The second one is called the Grinnell Desk or the Queen Victoria Desk, and it was presented to the widow of Henry Grinnell in 1880, as a gratitude gift for her husband’s contribution to the search for Sir John Franklin. In 1983, the Grinnell Desk was donated to the New Bedford Whaling Museum in Massachusetts. The third desk, which is actually a writing table, was kept by Queen Victoria and is today on display at the Royal Navy Museum in Portsmouth.

None of these desks, however, have the historic significance of the Resolute desk. The presidential desk has a brass plate installed at the front, bearing the following inscription: “H.M.S. RESOLUTE forming part of the expedition sent in search of SIR JOHN FRANKLIN in 1852, was abandoned in latitude 74° 41′ N Longitude 101° 22′ W on 15th May 1854. She was discovered and extricated in September 1855 in latitude 67 degrees N by Captain Buddington of the United States Whaler “GEORGE HENRY”. The ship was purchased, fitted out and sent to England as a gift to HER MAJESTY QUEEN VICTORIA by the PRESIDENT AND PEOPLE of the UNITED STATES as a token of goodwill & friendship. This table was made from her timbers when she was broken up and is presented by the QUEEN OF GREAT BRITAIN & IRELAND to the PRESIDENT OF THE UNITED STATES as a memorial of the courtesy and loving kindness which dictated the offer of the gift of the “RESOLUTE”.