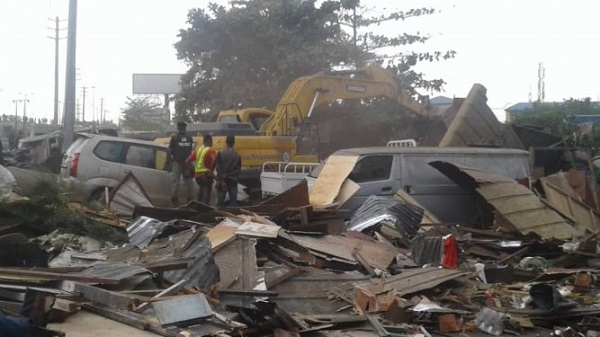 overnor of Niger State, Sanni Bello is squaring up to the Minister of the Federal Capital Territory (FCT), Muhammadu Bello over a large expanse of land located at Dakwa. At stake is 200 hectares of land. Claiming that the land belonged to the FCT, the Minister had sent a demolition team to Dakwa, a community occupied by about 500 households.

Before members of the community knew what was happening, the FCT officials, accompanied by about 100 policemen, started marking buildings for demolition. About 100 of the houses were reduced to rubble.

There was pandemonium, then stampede as owners of the buildings scrambled to retrieve whatever they could of their personal effects from the ruins. While the FCT authorities claim that Dakwa is part of the Bwari Area Council of the capital territory, the Niger State government insists that Dakwa is part of Tafa local government area of Niger state.

On the side of the Niger state government is the entire Dakwa community who described the FCT authorities as land grabbing invaders. Sensing that the confrontation was about to take a violent dimension, the FCT demolition team was forced to be a retreat. But not before 100 of the 200 houses marked for demolition had been brought down.

Members of the community, who said they have been living in Dakwa for upward of 15 years, claimed that they had valid documentation for their plots. Their title documents, they said, were validly issued by the Tafa Local Government of Niger State.

On the other hand, the FCT authorities claimed that the land belonged to the Abuja Automobile Market, Bwari Area Council and that it’s being managed by the Abuja Investment Company Limited.

The demolition team, led by the Director of Development Control of the FCT, Mukhtar Galadima, insisted that the land belonged to the FCT. According to him, the land was being occupied by “trespassers from Niger state” who now lay claim to ownership of the land.

Galadima said, “How can they say where we are demolishing is within Niger state. Our previous markings on the buildings were obliterated by members of the community by covering them with dark paints. I saw the markings we had on the buildings and we were trying to show them for them to know that we are working within our boundaries.

But I have noticed that some people are trying to be mischievous, particularly the Mai Angwan because they sold the land to the residents ignorantly and they pushed them to go to Tafa Local Government to get title documents and Tafa is in Niger State.”

Accusing the authorities of the Tafa local government of scamming the community, Galadima continued, “Somebody is playing on their ignorance and their psychology. From the boundary, it is very clear that Dakwa is under FCT. Tafa is a local government in Niger state.”

Responding to claims by the community that they were not served notice before the demolition exercise, Galadima said apart from serving them official notice way back in 2018, announcements were repeatedly made through radio advertisements informing them of the pending exercise. “As I said, some people are being mischievous. They are using somebody’s ignorance to manipulate the situation”, he declared.

Residents of the community, however, challenged the authorities of the FCT to substantiate their claims that demolition notice was served on them before they came to demolish.

The Chairman Angwan Fulani Primary School, Dakwa, Suleiman Ibrahim, produced copies of some of the title documents issued the residents by the Tafa local government authority.

He said the actions of the FCT officials clearly showed that they were doing the bidding of someone powerful in the society.

Narrating how the demolition exercise was carried out, Ibrahim said: “On the 10th of March was the first time they came in here. Nobody has ever been given anything like quit notice. The very day they came, they divided themselves into two groups.

As one group was marking people’s houses, the second group was demolishing. Some of us who were at work got the information and rushed back home but they had already demolished more than 100 houses and they were ready to continue that way.

We took them to where we had our beacons and also showed them title documents which made them stop the demolition that day. We followed them round to show them beacons but they came with one fake map in which every sensible person knows that it was fake and was recently produced.

We asked them when the map was produced but they could not respond. From all indications, their exercise is to take almost 90 per cent of Dakwa land. So far, they have demolished over 200 houses and if we had allowed them to gain entry the day we prevented them from coming in, maybe Dakwa would have been a past story now.”

Continuing, Ibrahim said: “The following day, they went to reinforce and came back. But we gathered ourselves and blocked the road to prevent them from coming into our community while we awaited the arrival of our landlords who were coming from Minna and Tafa.

“While that was on, the FCT team leader urged us to open the road but we refused because we don’t trust them. They claimed that they marked the houses as far back as 2018, but it is a lie. If they have evidence, they should show the world. The only marking they have ever done was on the 10th of March and while they were marking, others were demolishing.

“This action is painful because there was no prior notice and we are not occupying FCT land. From the document available to us, we don’t have anything to do with the FCT. They claimed we are illegal occupants but that is a lie. We are legally living here with our title documents with us. When our team arrived, they took themselves round but both parties seemed not to agree. The demolition leftover 100 households homeless.”

Lamenting further what he described as illegal demolition by the FCT, Ibrahim continued, “On Thursday night, we got information that the FCT team were coming back on Friday 14th March and that they were reinforcing because the first time they came, they came with about 60 policemen. We relayed the message to the chairman of Tafa local government and he urged us to be calm.

He promised to come with the Deputy Governor of Niger State. But before the arrival of the deputy governor, the FCT team came with more trucks and policemen to continue with the demolition. We wonder whose bidding they were doing because they claimed the land belongs to Abuja Investment Company.

We started a peaceful protest telling them to leave us alone that we do not belong to FCT. This demolition will only amount to social unrest and insecurity. We have lived here for about 15 to 20 years and we have never had anything of such. Later on, the deputy governor arrived and his presence made them leave the site.

Those who are claiming we are illegal occupants lack the fear of God. Similarly, the chairman of Tafa Local Government, Mr Ibrahim Ijah, demanded that the boundary between the FCT and Niger State must be ascertained. According to him, similar demolition exercise.

There was no notice before this demolition and that was why we reported to the appropriate authority – the Governor of Niger state and he sent his deputy to see what we are facing here. It is bitter experience and it is very bad because even in my capacity as the host, I was not notified about the demolition.”

Following the complaint by residents, the Governor of Niger State, Sanni Bello was at the demolition site for on the spot assessment. Bello, who was represented by his Deputy, Alhaji Ahmed Ketso said, “Information reached us that the FCT is carrying out demolition and that the people living within the community perceived that it is Niger state.

The governor decided to direct us to see what is happening. I have with me the Commissioner for Lands; Permanent Secretary in the Local Government; Permanent Secretary, Ministry of Lands; and the Surveyor-General. All of us are here just to take on the spot assessment of what is happening here and we believe that we have an outstanding boundary problem between Niger state and the FCT.

The deputy governor further said that some beacons had been identified, adding that appeal was being made to the FCT authorities to halt the demolition exercise. According to him, a meeting had been called to enable the disputing authorities to iron out the matter.

Content created and supplied by: Valentine007 (via Opera News )