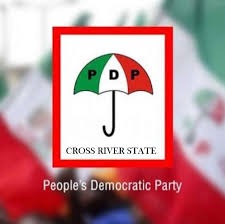 Cross River is a state in South South Nigeria, bordering Cameroon to the east. Its capital is Calabar and its name is derived from the Cross River, which passes through the state. Cross River State has been a PDP state since democracy took the centre stage in 1999 it has produced three PDP governors. Base on political dominance, the state is embrittled for the control of the party structure in the State. Political structure is the determining factor for who wins election under that platform. For sometimes now, PDP in cross river state has been indecisive who handle the affairs of the state as the leader of the party. As some political leaders may said, that the present government cannot control the party and not capable of uniting aggrieved members and boasts membership of the party. However, because of this insinuations and other factors, some leaders are trying to ensure that the party is not out of context.

Because of the action of the number one citizen of the state, some members of the party are trying to protect the image of the party. But this move is capable of putting the party in disarray, because the governor's camp is doing everything possible to hold onto the state party structure while that of the national assembly is on their toe to get hold of the structure as well.

Something need to be done now or fast in other to streamline the excesses in the both camps and balance the structure for them to work as one to deliver the state in the next dispensation for the party.

The pledge was made on Tuesday in Abuja when the Council Chairmen visited the National Chairman of the Peoples Democratic Party (PDP), Prince Uche Secondus at the party’s national secretariat.

The National Working Committee should come up swiftly to handle this issue because it is capable of disintegrating the state party cohesion which is very important in an election.

My opinion, the governor should be made the party leader but he should be made to know that the party is not Family affairs rather a group that comprises of many members and as such some decision should be taken in their knowledge. Especially the members of the national assembly and leaders of the party.

Peace is the only way forward, why not we embrace peace now that things are not getting out of hands.

Content created and supplied by: Bassious2 (via Opera News )

If The Justice Promised By The Police Will Mean My Life Being Taken, I'm Prepared To Die-Uduak Akpan

Governor Ganduje Releases 123 Inmates From Prison In Celebration of the Eid -el-Fitr in Kano State.