Meet Idi Amin Dada, the African dictator who eats humans and slaughtered up to 500,000 people 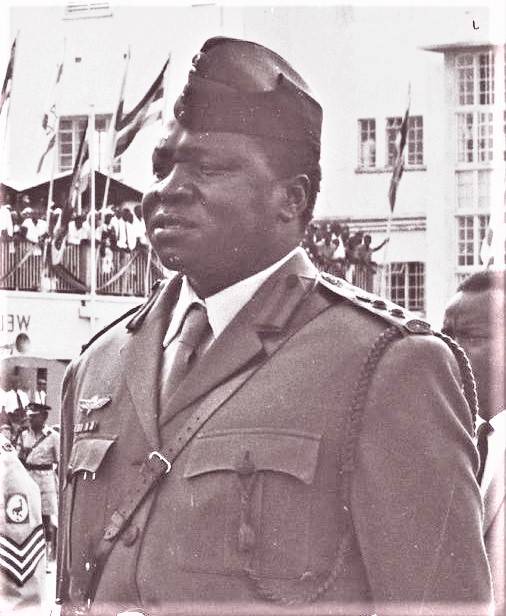 Idi Amin Dada Oumee was a former Ugandan president. Amin ruled viciously during and violated a lot of Human Rights. Idi Amin was born somewhere in Koboko or Kampala.

Moreover, during his military days, he rose to the rank of the army commander. In this position, he got misappropriate military funds. Therefore, Milton Obote wanted to put him under arrest. However, the sneaky Amin had other plans. Just before that, Amin led a coup then declared himself president of Uganda. Amin's reign of terror started in the year 1971 when he led a successful coup against the sitting president.

After taking power, Amin threw his weight around with sheer disregard for anyone for almost eight years. As the ruler of Uganda, Amin changed his political policies from the pro-Westerners stand to Muammar Gadhafi's side. Also, Amin sought help from, the Soviet Union, Zaire, and East Germany. After ruling for eight long years in Uganda, Amin made the poor choice of trying to grab land from Tanzania.

The then president Julius Nyerere invaded Uganda and hosted him from power. Upon which Amin went into exile in Libya then later Saudi Arabia. Idi Amin Dada Oumee died in exile on the 16th of August 2003. Idi Amin killed many people during his reign in power. Also, Amin abused his power as a president. This led to the deaths of many people and to the violation of human rights.

The big man Idi Amin's early childhood is full of a lot of controversies. Moreover, there are no know autobiographies that exists on his life accounts. So, according to some sources they that he may have been born in Koboko or Kampala. Amin's year of birth is also speculation to the year 1925. According to one historian, Idi Amin was the son of one Andreas Nyabire.

Amin's father was a convert from Catholicism to Islam; hence the name Idi Amin Dada. However, the father never stuck around for his childhood. Therefore, Idi Amin grew up with the family of his mother in a rural area of western Uganda. There was not much learning in the day back in Uganda, especially in the village. However, Amin got the opportunity to join Bombo School in 1941. However, he did not stay for long. After some years when Amin was old enough, he went to join the British King African Rifle

After just a few years in school, Amin got the opportunity to join the KAR. This was around the year 1946 as a cook. Sometime later, Amin falsely said that he was forced to join the British army. This was so that he could serve in the Burma war. However, in the year 1947, the army transferred Amin to Kenya as a private. Amin served in the 21st KAR infantry battalion that is based in Giligil in Kenya for two years. Later, the army deployed Amin to the fronts to help quash the Somalian rebels in the Shifta War.

Some years later in 1952, Amin’s brigade was deployed to deal with the Mau Mau uprising in Kenya central region. Amin was a rising star in the military ranks. In the year 1959, he got the promotion to Warrant Officer. This was the highest military rank for any African at the time in the British Military. Later he got the development to Lieutenant in the year 1961.

Therefore, the British Army made Amin one of the two officers. In the year of Uganda independence, Amin got the promotion to Captain. Then the following year he received a promotion to Major. After that, he became the deputy commander of the Ugandan military then later the full commander in the year 1964.

The love between the most influential people in Uganda at the time took a hit. Milton Obote pulled out of a deal between him and Amin. Moreover, Amin was recruiting so many of the West Nile people into the military. Also, there was a claim that Amin was supporting rebels in South Sudan.

On the other hand, Amin had attempted the life of Milton Obote. So, in retaliation Obote demoted Amin from military commander to the post of Army commander. There was a plan to arrest Amin in works for having misused the military funds.

So, before they could execute the plan, Amin led a coup and declared himself president. This was on the 25th of January, 1971. Obote had the made mistake of leaving the country to Singapore. Amin's troop took over the country in a few hours. In the process, Amin said that he would only be a transitional president. Therefore, he would organize elections soon when things are normal. The Ugandans were so happy because the power was in the hands of the military, not politicians.

Just one week after the coup, Amin took the opportunity to declare himself president of Uganda. Also, after there were suspensions of certain parts of the constitution. Later he convened a military Advisory Defense Council with only military personnel. The worst part was that he used military tribunals to handle almost all cases. Also, he made an appointment of soldiers to top government jobs.

Moreover, he told all the new ministers that all of them would go through the military discipline. There was a poorly organized coup that failed due to poor planning by Obotes allies. Soon after that, Amin took to persecuting people of specific ethnic groups. In his time as president, Amin saw to the death of so many people in Uganda.

Idi Amin Dada Oumee met his death while still on exile in Saudi Arabia. He died on the 16th of August 2003. He had first gone to exile in Libya with his friend Gaddafi.

He is famous for his big ego and gave himself titles and became:

‘His Excellency, President for Life Field Marshall Al Hadj Doctor Idi Amin Dada, VC, DSO, MC. Lord of all the Beasts of the Earth and Fishes of the Sea and Conqueror of the British Empire in Africa in General and Uganda in Particular’.

"I am not an ambitious man, personally," Amin says after taking power, "I am just a soldier with a concern for my country and its people."

He married 6 women. One was found brutally mutated after getting pregnant with another man

Also rumored to have fathered around 43 children.

rumored to have practiced cannibaliysm.