Oldest country in Africa in war with itself, Rebel claim they shot down Ethiopian plane, retook Axum

By Ayeko-oto (self media writer) | 1 year ago 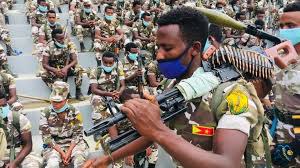 Insurgents in the Tigray region of Ethiopia claim to have shot down a military plane and recaptured a city of federal forces on Sunday, a day after Prime Minister Abiy Ahmed declared victory in the northern region.

Debretsion Gebremichael, leader of the Tigray People's Liberation Front (TPLF), told Reuters in a text message that his troops had also captured the pilot of the military plane.

There was no immediate response from the government or the military, while demands from all parties are difficult to confirm as telephone and internet connections to the northern Tigray region were cut off and gained access. has been under strict control since the conflict began on 4 November.

The Ethiopian government tried to prevent an uprising by the TPLF, a powerful ethnic party that had dominated the central government for nearly three decades, until Abiy came to power in 2018. It is believed that thousands of people have died since the When the fighting began, more than 43,000 fled to neighboring Sudan and there were reports of militias attacking civilians.

The conflict was a difficult test for Abiy, a leader who promised to unite the countless ethnic groups that make up 115 million Ethiopians, but who have been repeatedly subjected to violent attacks across the country. The influx of refugees and TPLF rocket attacks on neighboring Eritrea are also threatening to destabilize the wider Horn of Africa.

Abiy, who turned down international offers of mediation, said Saturday night that federal troops had taken control of the capital of Tigrayan Mekelle and eased fears of protracted fighting in the city of 500,000. He said federal police would try to arrest TPLF 'criminals' and bring them to justice.

Police then issued warrants against 17 military officers for treason and embezzlement of public property, state broadcaster Fana TV reported. There are already arrest warrants against 117 other senior officers with suspected links to the TPLF.

Ghost of the armed war It was not clear whether any of the TPLF leaders had surrendered or been arrested since Saturday. Where they were was unknown. Even as Mekelle's TPLF withdrew, Debretsion, the group's chairman, told Reuters his forces would continue to fight - a statement that fueled the specter of a protracted armed war. In Sunday's text messages, he said that the TPLF had also conquered the city of Axum.

Ethiopia's national television said on Sunday that 70 graves, some of which contained individuals and bodies, had been found in the city of Tigray in Humera, citing witnesses who said the victims had been killed by pro-TPLF fighters.

The report could not be verified independently.

The human rights researchers and civilians fleeing the conflict say fighters on both sides, including civilian militias supporting more formal security forces, have committed massacres. The government and the TPLF deny that their forces were involved.

The International Committee of the Red Cross (ICRC) said Mekelle remained silent on Sunday. But he said in a statement that hospitals' supplies were no longer available, such as gloves to treat the injured, and one hospital did not have corpses for the dead.

At Ayder Reference Hospital, one of the largest in the city, the ICRC said that "about 80 percent of patients suffered trauma" without specifying how the injuries were sustained.

"The influx of wounded has forced the hospital to suspend many other medical services so that limited staff and resources could be devoted to emergency medical care," the ICRC added.

Attack on Asmara,Diplomats and regional experts also said that a quick military victory in Mekelle would not end the conflict.

Hours after Abiy announced that Mekelle had fallen under federal troops on Saturday, missiles were launched from Tigray and hit Asmara, the capital of neighboring Eritrea, two diplomats told the news agency. of AFP.

The missiles were apparently aimed at Asmara airport and military installations, although it was not known exactly where they landed and what damage they would have done. The US Embassy in Asmara reported that "six explosions" took place in the city around 10:13 on Saturday (19:13 GMT).

The TPLF accused Eritrea of sending troops to Tigray to support the Ethiopian government and said it had fired missiles at Asmara on November 14.

TPLF has a history of armed resistance. Mountainous terrain of Tigray and its borders with Sudan and Eritrea helped the group in their long struggle against the Marxist strongman Mengistu Haile Mariam, whom they eventually expelled in 1991.

TPLF and Eritrean forces fought against Mengistu, and with his departure, Eritrea gained independence from Ethiopia. But the relationship deteriorated shortly after. The two countries went to war over a border conflict in 1998-2000.

Abiy won a Nobel Peace Prize last year for peace with Eritrea, but the TPLF still considers the country a deadly enemy.

Rebel government launched the offensive in Tigray after what it described as an attack by local forces on federal troops stationed there.

The TPLF accuses Abiy of trying to consolidate control at the expense of Ethiopia's ten regions, which exercise broad powers over issues such as taxation and security. Abiy denies this.

Tensions escalated after Tigray held a regional election in September despite the federal government postponing the national vote until August due to the COVID-19 pandemic. The government has called Tigray's vote illegal.

Content created and supplied by: Ayeko-oto (via Opera News )