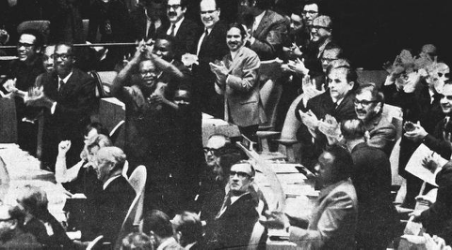 Representatives to the United Nations (UN) applaud enthusiastically as the United Nations General Assembly (UNGA) adopts at its 26th session a resolution with an overwhelming majority of votes to restore all the rights of the People’s Republic of China (PRC) at the UN, Oct. 25, 1971. (File photo)

On Oct. 25, 1971, the United Nations General Assembly (UNGA) adopted at its 26th session Resolution 2758 with an overwhelming majority of votes (76 in favor, 35 opposed and 17 abstentions) to restore all the rights of the People’s Republic of China (PRC) at the UN. The passage of the resolution represented a significant victory of the diplomacy of the PRC as well as the forces of justice in the world.

The restoration of the lawful seat of the PRC in the UN ushered in a brand new chapter of the cooperation between China and the UN. With courage and resolution, China has constantly integrated itself into the international system. It has joined almost all universal intergovernmental organizations, and signed more than 600 international conventions and amendments.

As the only developing country among the permanent members of the UN Security Council, China has adhered to the UN Charter spirit and spoken up and acted for justice all along, playing a key role in safeguarding international equity and justice.

Over the past 50 years, multilateralism has experienced rapid development, and the international landscape has undergone profound changes. During the period, the collective rise of emerging markets and developing countries around the world represented by China has greatly enhanced the forces for safeguarding world peace and development. 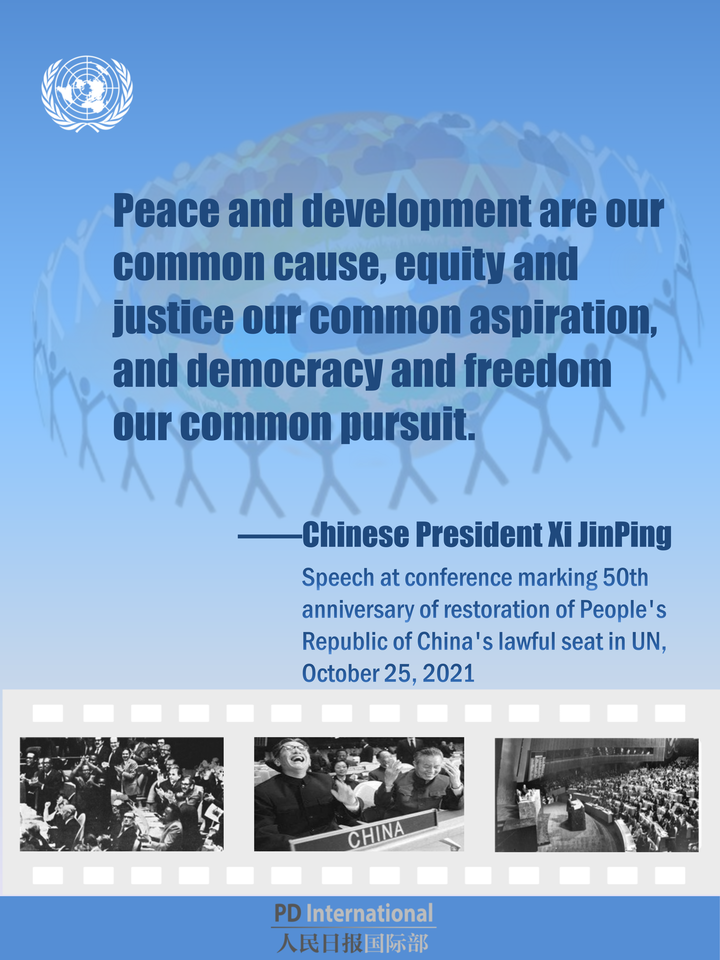 While firmly safeguarding the international system with the UN at its core, international order underpinned by international law, and the UN’s central role in international affairs, China has created a miracle of human progress with its own development, and made increasingly significant contributions to world peace and development.

The past five decades have witnessed how the interests of countries become increasingly intertwined and their future more closely linked. When profound changes and the COVID-19 pandemic, both unseen in a century, are coupled, humanity is confronted by multiple risks and challenges, which requires strong and global responses.

China proposed building a community with a shared future for mankind and has always advocated building a consensus on jointly tackling challenges through the platform of the UN, which is the right choice conforming to the trend of the times. From putting forward the well-known “Three Worlds” theory to making the scientific judgment that peace and development are the themes of today’s world, and from proposing the establishment of a new international political and economic order to calling for the construction of a harmonious world and promoting the building of a community with a shared future for mankind, China has contributed wisdom and solutions to advancing world peace and development at every historical juncture.

Such endeavors have manifested China’s firm resolve and earnest action to safeguard and practice multilateralism and support the development of the cause of the UN, and helped the rest of the world see more clearly the positive changes brought to the world by China’s continuous development and understand better the important value of the idea of building a community with a shared future for mankind.

As UN Secretary-General Antonio Guterres said, China has become “a strong pillar of multilateralism” and the aim of practicing multilateralism is to build a “shared future.” China always believes that multilateralism is about having international affairs addressed through consultation and the future of the world decided by everyone working together. Holding grand commemorative activities to mark the 50th anniversary of the restoration of the PRC’s lawful seat in the UN demonstrates once again the country’s commitment to safeguarding and practicing multilateralism and advancing the building of a community with a shared future for mankind.

China called on the UN to hold high the banner of true multilateralism and serve as the central platform for countries to jointly safeguard universal security, share development achievements and chart the course for the future of the world, as well as to stay committed to ensuring a stable international order, increasing the representation and say of developing countries in international affairs, and taking the lead in advancing democracy and rule of law in international relations. The country also called on the international organization to advance, in a balanced manner, work in all the three areas of security, development and human rights, create a common agenda, highlight pressing issues and focus on real actions, and see to it that commitments made by all parties to multilateralism are truly delivered.

Standing at a new historical starting point, China will continue to make all-out efforts in participating in UN affairs, safeguard the status of the UN, uphold the purposes and principles of the UN Charter, hold high the banner of true multilateralism, and move forward hand in hand with all progressive forces in the world toward the building of a community with a shared future for mankind.

The decision, while representing a solemn promise made by the century-old Communist Party of China, demonstrates the historical consciousness and sense of mission of China as a responsible major country.