By OmoobaAlekuwodo (self media writer) | 3 months ago 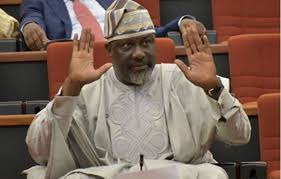 The political crisis rocking the opposition Peoples Democratic Party (PDP) may have consequential effects on the political career of some of the members of the party.

One of the members of the opposition Peoples Democratic Party who may be considered trapped within the party is Senator Dino Melaye.

Sincerely, except the crisis rocking the opposition Peoples Democratic Party is resolved amicably, the political career of Senator Dino Melaye may be left with just one option.

It could be recalled that Dino Melaye has enjoyed tremendous support from the Asiwaju Bola Ahmed Tinubu led Action Congress of Nigeria (ACN). He was elected into the House of Representatives for several tenures under the platform of progressives party. Dino Melaye was also pushed forth to the National House of Assembly, to represent Kogi West Senatorial District under the platform of All Progressives Congress, with the influence of Asiwaju Bola Ahmed Tinubu.

Now, it is clear and glaring that Senator Dino Melaye has lost the pride he, previously, enjoyed in Kogi State.

For instance, it could be recalled that Senator Dino Melaye lost both the senatorial poll and Governorship elections he had , so far , contested in Kogi State under the platform of opposition Peoples Democratic Party.

This may be a fiable justification that the political influence of Senator Dino Melaye has exponentially lost value in Kogi State.

Most especially, the political career of Senator Dino Melaye may suffer serious setback, if Rivers State Governor Nyesom Wike should be successful with the attempt to remove Prince Uche Secondus as the National Chairman of the opposition Peoples Democratic Party.

The only hope for the possible resuscitation of Dino Melaye's political career is former vice president Atiku Abubakar to be successful with his presidential bid.

Even, the presidential ticket of the opposition Peoples Democratic Party is not sure for Alhaji Atiku Abubakar, the political career of Senator Dino Melaye squarely depends on whether Atiku wins or lose the next presidential election in the country.