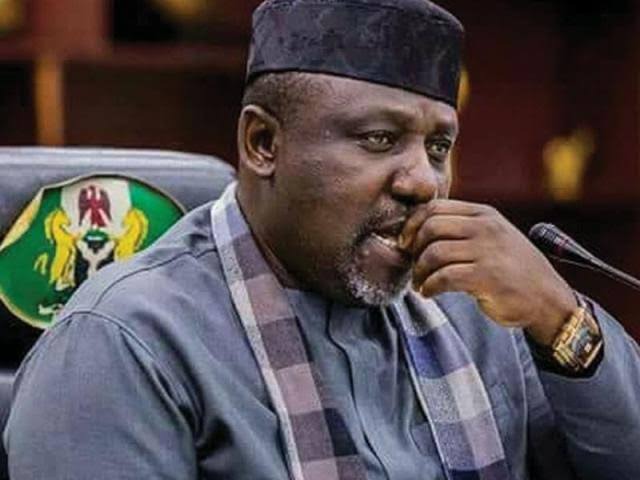 There is that part of us, that always guides us towards the moral path, in everything we are doing.

It lets you know whether you are doing the right thing, or whether getting it wrong.

In recent times, one begins to wonder, what has become of that moral compass in people, when people tend to go the way of dishonour, rather than chose the path of uprightness.

The case of the former governor of Imo State, Senator Rochas Okorocha, becomes one of such reasons, why we wonder why people have suddenly seemed to turn away from the right track, and follow the one that could lead only to destruction.

Okorocha came into power in the best possible way, probably the only governor of Imo State, truly voted for by the people, before Rt Hon Emeka Ihedioha.

He was supposedly the people's champion, when a barrage of lies and blackmail, were deployed on former governor Ikedi Ohakim to remove him from office.

Even the military era was better, compared to what Imo people went through under Okorocha.

Today, Ihedioha, now Hope Uzodinma, have started building roads from the scratch, because in Imo State, there is virtually no single road that wasn't filled with potholes, or totally unmotorable, after Rochas Okorocha left office.

Even though Uzodinma did not emulate Ihedioha in the areas of payment of salaries and pensions, despite copying his other policies, Okorocha set the precedence for abuse of the civil service.

Under Okorocha, salaries were slashed, overtimes and leave allowance were never paid, every other allowances accrued to civil servants were withheld.

What happened to those monies? In who's pockets did all these monies enter into?

The answer to that, was probably why I wasn't surprised, when I saw the video of Rochas Okorocha boosting that he was richer than Imo State.

Why wouldn't he be richer than Imo State, when he withheld pensions for eight months, running into almost N50billion? How can Imo, in our present financial state, match a man who couldn't give account of three bailouts as well as Paris Club refunds he collected, for which Imo is paying back today?

Yet, despite the billions unaccounted for under Okorocha, our lands were not spared, as Okorocha and his family practically shared the state amongst themselves.

For an unemployed wife of a governor, to build a hotel worth billions of naira, and Okorocha would shamelessly come to defend it, begs the question of his moral compass.

Is it working or totally broken?

When the unemployed daughter of Okorocha, and wife of Uche Nwosu, built a multibillion naira mall, on the currently disputed land, allegedly taken by force from Female Lawyers Association, when her husband was Commissioner for Lands, Imo people raised alarm, and Okorocha claimed his daughter built the edifice, from selling Gala in Government House. Imo people are still wondering what kind of Gala she sold, that gave her the billions used to build that mall. Probably if we knew the make of the Gala, we may also try our luck and build our own multibillion naira malls.

After eight years in office, Okorocha can only boost of the statues he moulded for the corruption trailed sacked South African president, Jacob Zuma, but cannot point at a people oriented project he started and completed to the best standards in Imo State.

The shooting of his son-in-law, following his attempt at breaking and entering, which resulted in his arrest, exposed to the world, that Okorocha's claims of building 27 World Class hospitals in Imo was fake.

Even the health centres, equipped and renovated by Ohakim, were left to collapse, while the 27 hospitals Okorocha claimed he built, are actually 27 uncompleted buildings, for which N2billion each, was collected for them. With something slightly below N54billion from the hospitals in his pocket, why would Okorocha not be richer than Imo State.

It was almost madness to say the least. Such brazen display of covetousness without remorse, makes people wonder if there is hope for the country, with such people in positions of authority.

The claims by a sponsored faceless group, that Uzodinma was after Rochas Okorocha because of the 2023 presidency holds no water.

Only a guilty people will be afraid of probe.

I am an Imo man, but personally, if Okorocha is our candidate for Igbo presidency, I'll vote a Fulani man again.

With the level of land grabbing experienced in Imo in the last eight years, as far as I'm concerned, putting Okorocha in a position where he welds unlimited Federal power, would be very dangerous for Nigeria.

His land holding after eight years as president, may be the size of a state, while many parastatals like NNPC, may be privatised and handed over to his personal company.

With the daily revelations being exposed about Okorocha's eight years in office, one seriously begs the question, is Rochas Okorocha's moral compass working or is it broken?

Help us share your thoughts on what you think.

Effects And Impact Of Covid-19 On Nigeria's Economy, Business, And Ways Of Life