Ramadan: Sultan Of Sokoto Tells Muslims To Look Out For The Moon

Muslims have been urged by the Sultan of Sokoto, Alhaji Sa’ad Abubakar III to look out for the crescent (moon) of Ramadan 1442AH from Monday. 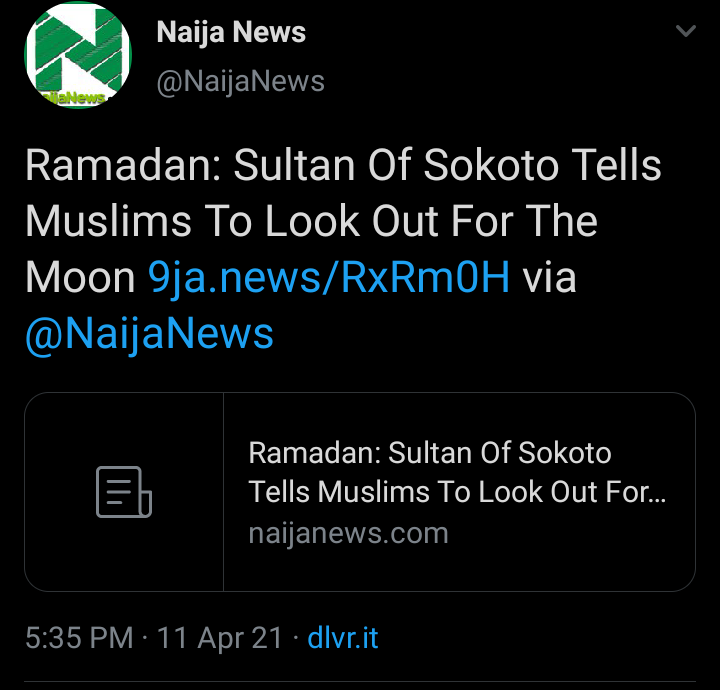 The statement by the Chairman, Advisory Committee on Religious Affairs, Sultanate Council, Sokoto, Professor Sambo Junaidu urged anyone who sights the moon to report such to the nearest District or Village Head for onward communication to the Sultan.

The statement also released phone numbers that can be used to report the sighting of the moon.

“This is to inform the Muslim Ummah that Monday, April 12, which is equivalent to the 29th day of Sha’aban 1442AH shall be the day to look for the new moon of Ramadan 1442AH.

“Muslim are, therefore, requested to start looking for the crescent moon on Monday and report its sighting to the nearest District or Village Head for onward communication to the Sultan,’’ the statement reads.

South-West: There Will Be No Real Winner In PDP Congress – Doyin Okupe

Former presidential aide, Doyin Okupe, on Sunday said the outcome of the zonal congress of the Peoples Democratic Party in the South-West will not be productive and will affect the party in the region.

Recall that the main opposition party changed the venue of its zonal congress from Ibadan to Osogbo, Osun State.

The effort of the reconciliation committee led by the former Senate President, Bukola Saraki, to solve the differences between the Governor of Oyo State, Seyi Makinde and former Governor of Ekiti state, Ayo Fayose, has yielded no result.

Okupe while speaking on the issue in the region said neither Fayose nor Makinde is qualified to lead the party in the zone.

Okupe, in a series of tweets, also predicted that there’ll be no ‘real winners’ in the zonal congress.

“The final Straw. The die is cast and barring a Divine intervention, an amicable settlement between Governor Makinde and former governor Fayose, is an impossibility. Several attempts have been made by leaders and elders at the zonal level. 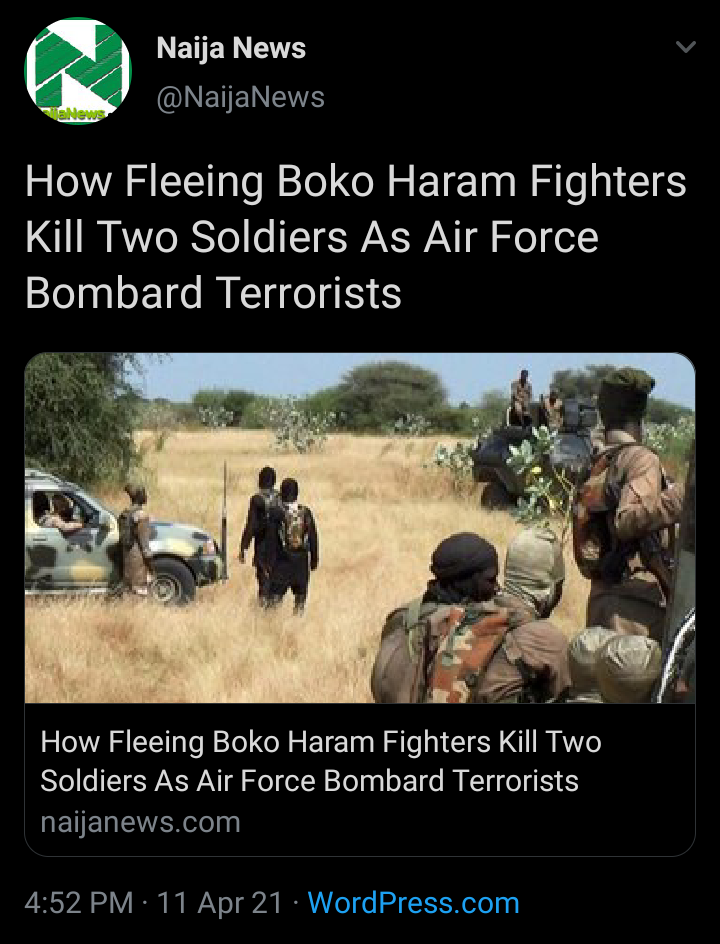 It was gathered that aircraft of the Nigerian Airforce ( NAF) later eliminated scores of the ISWAP/Boko Haram in five guntrucks in Damasak, Borno State.

An intelligence officer told PRNigeria that the young soldiers were killed when they wanted to apprehend a man suspected to be a spy for terrorists.

“The young soldiers suspected the unarmed man who were seen leading terrorists to some warehouses.

“Suspecting that the man was on a mission, rather than shooting him, the soldiers ran after him so that he could be caught alive. Unknown to them terrorists on an ambush with guntrucks opened fire on the two soldiers and the informant.

“Some other terrorists were hits close to the perimeter fencing, while others were neutrialised while hiding in the blue roof compound.

“The general security situation within Damasak Town is relatively calm but unpredictable,” the officer said.

Terrorists attacked Damasak town on Saturday and carted away an Ambulance and a Jeep. They also burnt homes of Police DPO, traditional ruler and NRC residents within Damasak town.

YOLA No fewer than 5,000 persons, mainly women and children have been displaced following weekend attack by Boko Haram in Hong Local Government Area of Adamawa. 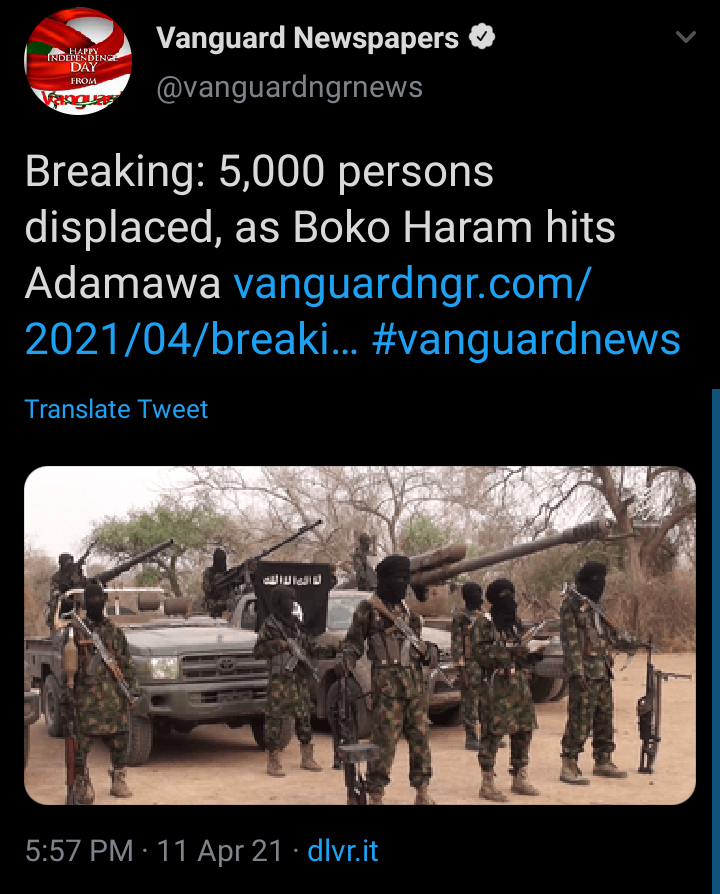 Dr Mohammed Sulaiman, the executive secretary of the Adamawa state emergency Management agency, announced this in Yola on Sunday.

The Executive Secretary disclosed that many other communities from neighbouring local governments were also displaced.

He recalled that the insurgents came in nine vehicles on Friday to attack Kwapre village in Dugwaba District of Hong Local Government Area.

Suleiman stated that the insurgents surrounded the village and killed seven people, including three children.

The emir of Birnin Gwari, Malam Zubairu Jibril Mai Gwari, ll has lashed out on Nigerian politicians whom he described as greedy opportunists. 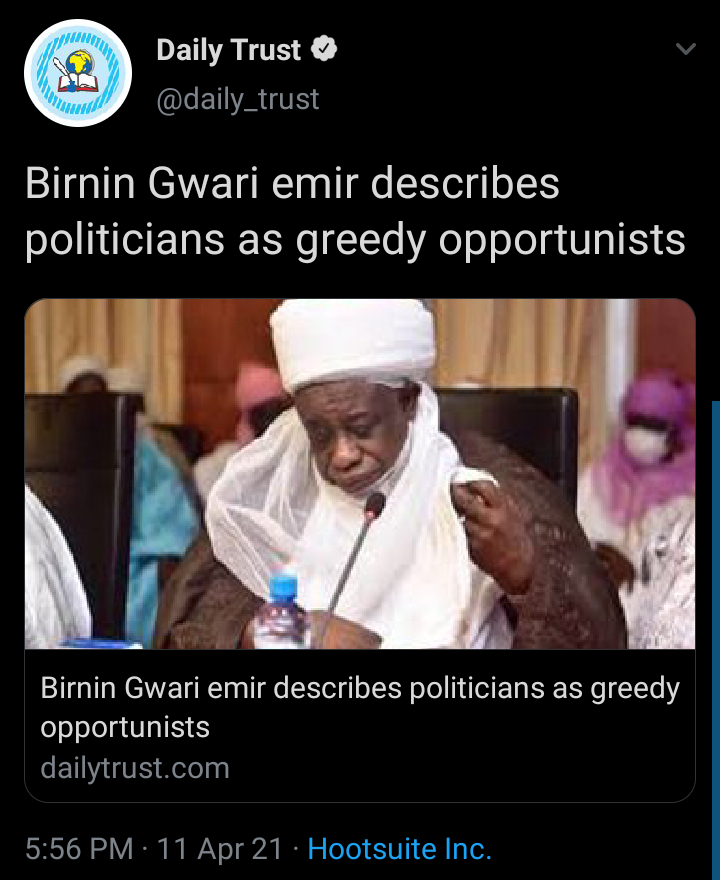 The monarch made the comment in Kaduna during the North-West Conference on the State of the Nation and contemporary challenges in Nigeria organised by Arewa Research and Development Project ARDP AND Savanah Center.

He said some politicians have capitalised on illiteracy and poverty among the people to attain power.

“I have said it on so many occasions and so it’s easy for me now to repeat what I have said before. Why do we have failure in politicians running state, local and federal governments? I traced the problem to who we consider as politicians in our localities.

“If you go to every part of the country those who call themselves politicians, stakeholders, party chairmen, delegates majority of them really cannot stand to be called politicians because they are just greedy opportunists. 'Amotekun Operatives Should Be Permitted To Carry Guns' - Babajide Kolade