By footballmaster (self media writer) | 1 year ago

Former President Donald Trump and his wife Melania Trump sparked divorce rumors after a report claimed that two slept in separate bedrooms during their time at the White House. The rumors were further strengthened as the former first lady of the U.S. walked straight to the car after landing in Florida's West Palm Beach while Trump stopped for the press.

Sources told CNN that Melania was "not sad to be leaving" Washington D.C. The sources also said that the couple slept separately in different bedrooms for the "majority" of their time in the White House and that she had "checked out" during her final weeks in his presidency.

"Donald Trump slept in his own bedroom, which was previously a study or den during other administrations," a sourced told the news outlet. 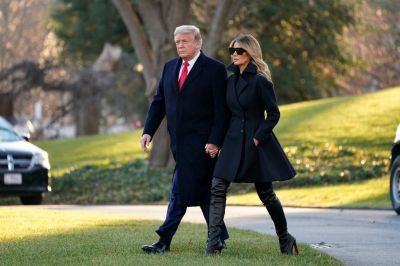 People took to social media to express their surprise over the news.

"WAIT! WAIT! I know I said I wasn't going to tweet about Trump again, but I never knew that he and Melania didn't share a bedroom at the White House until now!!" one Twitter user wrote.

"It's so refreshing to see a loving couple like Jill & Joe Biden. There was NO LOVE between Melania & Trump. They even slept in separate bedroom. And wonderful to see Michelle Obama be there to show her support," wrote another user.

"What is hilarious about the Trump's sleeping arrangement is that Melania got the Master Bedroom suite and DT, the guy with the small hands, was relegated to a converted den. Can't stop laughing!" a third user said.

If â€œIâ€™m over itâ€ were a person.  pic.twitter.com/CLA8WucyXX

Trump and Melania left for Mar-a-Lago resort in West Palm Beach, Florida on Wednesday morning — hours before President Joe Biden was sworn in. Melania appeared to snub her husband as she walked straight to the car after the couple arrived in Florida on Tuesday. The clip was shared by the Lincoln Project on Twitter and garnered over a million views.

Separately, Melania was also accused of snubbing her staff at the White House that served her for four years. She did not write thank you notes to some 80 staff members, including cooks, butlers and housekeepers, before leaving the White House.