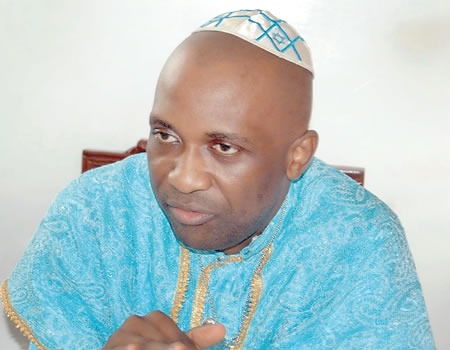 The leader of INRI Evangelical spiritual church, Primate Elijah Ayodele has predicted victory for the governor of Ondo state, Arakurin Rotimi Akeredolu in the APC Primaries in the state, slated to come on July, 20,2020.

The man of God while speaking about this in a telephone interview revealed that Rotimi Akeredolu will become victorious In the primary election because he has taken steps that will lead him to victory. He jokingly explained that he pities those contesting with him because they will lose at the end of the day. However, he noted that this doesn’t guarantee his victory in the general election because he sees danger lying ahead of him.

‘I just pity those who want to contest with Rotimi Akeredolu, If he does what is needful, the election will be a walk over, Akeredolu will win the primaries because of the steps he has taken. Although this doesn’t guarantee his victory in the general election, because danger still lies ahead of him’’

When asked about the PDP primaries in Ondo and the outcome of Edo state general election, he revealed that he will speak about PDP primaries soon and that of Edo general election which will come up in September. He also expressed his displeasure in Edo-based prophets who have kept quiet during this period. He adviced that a time like this isnt the time to be quiet, and that they should speak up like they normally do when they make utterances.

‘On PDP and winner of Edo general election, I will address it very soon. Its unfortunate that Edo pastors are fidgeting, they are not talking the way they make utterances, this is a time a prophet doesn’t need to be silent, if they like it or not, its fine, we are working to satisfy the lord’’

Also, Primate Ayodele made a strong warning to the military, he made it known that if care isnt taken, military men will start killing each other, he predicted assassination attempt on the chief of army staff, General Buratai. He also noted that there is corruption in the Nigerian army. He alsoasked that Nigerians pray against plane crash

‘If care isn’t taken, military will be killing military. The chief of army staff will face assassination attempt, I don’t know if he will survive it. Let’s pray against any plane crash , Air force or police helicopter or any private jet crash.’’

It is worthy of being noted that in the beginning of 2019, Primate Ayodele predicted that he sees mutiny in the army and shockingly, recently, over 350 military men resigned.

While speaking on why his prophecies have proven to be accurate over time and why he has never been associated with any politician or government, he made it known that he isn’t a prophet who relies on information from government before he makes prophecies, explaining that he doesn’t work for any government too because he isn’t friends to politician

‘’ We are not working with any government, its unfortunate that pastors who work for the government rely on the information they get before making prophecies, I am not a friend of any politician, if anyone says I am his friend or on his payroll, he should come out. I don’t like politicians’’

No doubt, Primate Ayodele has been described as a controversial Prophet who is very blunt in his prophecies and speech, and of course, he has received countless backlash and critics. He explained that he is open to criticism and he doesn’t expect everyone to like him because he isn’t a celebrity pastor.

‘’ I’m open to criticism, I’m not a celebrity pastor so I don’t expect to be loved, you can’t see me in heavy convoy or in any government house, I’m not a member of CAN Or PFN because they are shame to the society, you can’t see me in the gathering of any pastor, I go on my own, anything I say, I do to the glory of God almighty, I’m not moved by any comment, either good or bad, GOD is the only one who knows a prophet’’

On the pursuit of Okonjo Iweala to head the World Trade Organisation, he made it known that if all African leaders can come to a consensus and nominate her, she will be victorious because she is the best candidate for the job

‘’ On WTO, Okonjo Iweala can win if all African leaders come together to nominate her , she is the most qualified but she needs to be pushed, if they can come to a consensus in Africa, she will be victorious’’

Primate Ayodele further reinstated his prophecy that Covid-19 will kill more people and the peak of the virus will be July and August. He still maintained that President Buhari will still mourn if proper cleansing isn’t done in the Presidential Villa.

‘’ Covid-19 will still kill many people this month and next month.

President Buhari will still cry if proper cleansing isnt done in the villa, there is traces of covid-19. I’m not asking them to call me or buy me over, they can use their pastors , mine is just to deliver the message’’

It would be recalled that he said In this period of Covid-19, lots of corrupt officers will be exposed, and he said two years ago that corruption will fight Buhari’s government .

So far, Ngige, Akpabio, Malami have been indicted, he still maintained that if Buhari doesn’t take necessary steps, his government will be disqualified for corruption.

‘’If Buhari does not take necessary steps, his government will be disqualified for corruption, governors will still also be indicted too, there are still more corruption in his government.

Nigeria is sitting on a time bomb because our security is shaking, and people who have corrupt covid-19 money will be exposed’’

Speaking on the launch of 10,000 prophecies of his that have come to pass, he made it known that he has over 200,000 prophecy that have been fulfilled to the glory of God but he wants to pick 10,000 out of them, which is the first of its kind in the world

‘If I can have 200,000 fulfilled prophecy to God’s glory and I just want to pick 10,000 out of it, you will know there is a difference between a prophet and a new generational prophet’’