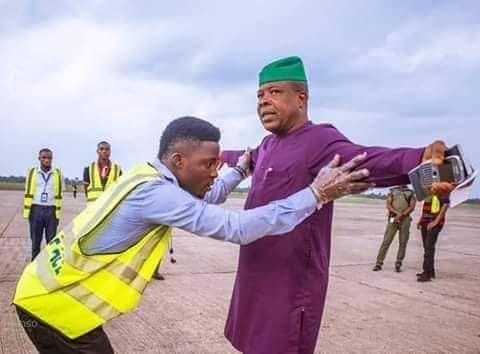 Reading the report and hearing the news that the current regime accused Imo PDP and immediate past governor of Imo State, His Excellency, Rt. Hon. Emeka Ihedioha CON of being desperate to return to Douglas House, Owerri, the seat of power in Imo State.

The key word in that unguarded utterance by this regime is "desperate". What's the meaning of that word? I know it means a craving for what a person desires. Ordinarily, in the philosophy of desperation, it's not negative for anyone to be desperate.

Desperation is an innate attribute of the human entity. Over the centuries and generations of the human society, competition and rivalry has remained an integral experience. And there's no competition or rivalry without the ingredients of desperation!

So, if this regime used the word "desperate" derogatorily, then the scholastic qotient of the operators of this regime is very much suspect and questionable!

That's why it's sheer hypocrisy on Uzodimma's part to invoke the concept of "desperation". After he was roundly trounced in the March 9, 2019 governorship election, Uzodimma ran to the Tribunal, where after five months, the Tribunal upheld the election of Ihedioha as Imo governor.

If desperation was such a bad thing, who between Ihedioha and Uzodimma is the bad man? He must have forgotten that while it lasted for a whole of nine months, who's who in Imo State, in different approaches implored Uzodimma to sheath his sword and withdraw his petition from the court. Did he abide? Wasn't that the great grandmother of all forms of desperation?

The entire known history of Uzodimma leaves a summary of a fellow whose first name is "Desperado". He's an incurable "Desperado"! Desperation is the first nature of the guy called Hope Uzodimma! It's quite surprising how he's now seeing Ihedioha as desperate!

Yet, in what way did Ihedioha display desperation to return to power as Imo governor? How? When? Why? Where? Is it enough to gossip, like a pregnant baby girl, that Ihedioha "sponsored" the suit by the Reformed Advanced Party (RAP)? What's the evidence that such sponsorship happened?

It's such a big pity that people in Douglas House at this point in time are such dimwits who could afford to talk like touts at Ochanja Motor Park over their cluelessness, ineptitude, incompetence and failure! Ndimo, cry the beloved State! Imolites behold thy Shepherd!

Since taking over power in the most fraudulent manner at the Supreme Court, this unpopular regime has blamed its failure and inability to deliver government and governance on Imo PDP and Rt. Hon. Emeka Ihedioha.

That said, let it be known that two days after the Supreme Court misjudgement, Ihedioha stepped aside. Right from the day his effort to keep justice on its head was suppressed by the apex court till date, Ihedioha hasn't set his foot on Imo soil. His planned first entry into the State was viciously attacked and truncated by this regime, out of what was discovered to be morbid phobia for the name and presence of Ihedioha.

The national statesman, Ihedioha, has been very busy serving humanity in Nigeria and Imo State. That's why till date Ndimo and Nigerians still fondly think and talk well of him. He's daily present in the hearts of Imo people and Nigerians! He has made history!

That's why this regime has created a mythical image and nature for Ihedioha. To them Ihedioha is ubiquitous, omnipresent and mnipotent. Hence, at the thought or mention of Ihedioha, this regime catches cold, malaria and typhoud combined. It convulsively bows, quakes and quivers!

On the fresh cause of their lingering fear, the suit by RAP is seeking judicial clarifications on how Uzodimma remained the guber candidate of Imo APC after the Supreme Court upheld Uche Nwosu as Imo APC and disqualified him for also being candidate of Imo AA in the same 2019 election.

Does a political party that participated in an election require an Ihedioha to sponsor its quest to know how Uzodimma remained Imo APC guber after Uche Nwosu was disqualified? Barr. Kingdom Okere is known human rights lawyer. He knows the law just as he knows his rights. Does it require Ihedioha to send Okere to go seeking judicial interpretation of the law? Does that accusation by this make any sense?

Let me end by urging genuine Imolites to keep holding this awkward regime responsible and constantly calling them out to explain what they're doing with billions of naira that accrue to Imo State.

Ndimo mustn't give room to the excuses and blames by this failed on arrival regime. Rt. Hon. Emeka Ihedioha as Imo governor never blamed his predecessor, but went on to deliver good government and good governance.

Is it possible that Ihedioha is the cause of the failure of this regime? Is Ihedioha responsible for the waste and refuse, dirty and uncleanliness that are eating up the physical environment of Imo State?

If Ihedioha didn't sponsor Uzodimma not to pay, then certainly he never sponsored Barr. Kingdom Okere and his RAP to their legitimate quest at the law court over the legality, and elegibility of candidature of Uzodimma in the 2019 election.

Rt. Hon. Emeka Ihedioha hasn't the character and is not in the business of bad leadership. He has set the example of good leadership and left the big shoes at Douglas House. Ihedioha can only do well and not bad for Imo people. Fortunately, Ndimo know that truth!

Therefore, instead of venting his frustration and anger on Ihedioha or anybody for that matter, let Uzodimma face the Court and RAP and Barr. Kingdom Okere. Uzodimma came through the Court. If he must go through the Court, to God be the glory! Rt. Hon. Emeka Ihedioha hasn't any finger in it, this time around!

By God's grace, Imo State must be rebuilt!