By OgunTescom (self media writer) | 29 days ago

A video has surfaced online where Nigeria Minister of interior, Ogbeni Rauf Aregbesola was sighted in an American coffee shop where a man who identified himself as a Nigerian was seen filming the honorable minister who came in company of a female relative. 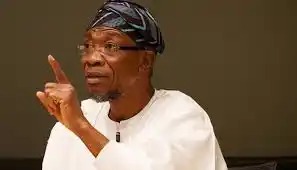 Moving further to Aregbesola where he had gone to sit, the man who claimed to be a Nigerian asked if he is Aregbesola and in response Aregbesola asked him to come and asked for his identity.

When asked about his identity, he simply responded by saying, "am a Nigerian", when further asked about what he want, he said " I don't want anything, I saw you and I think I recognized you" .

At this point, Aregbesola was seen moving towards the man probably trying to block the recording or take his mobile phone which makes the man to tell him " you can't touch me this is America , you can not take my phone, I can do what I want in America , we are not in Nigeria, if you touch me I can sue you, the man reiterated.

Arguing further, Aregbesola told him that he can not be filmed without his permission as the man was intruding into his privacy but the Nigerian told him that even Joe Biden, who is the American President can not tell him not to do so as long as they are in a public.

This little drama that happened in an American coffee shop, could have landed the young man in police custody or to have had the beating of his life in the hands of the security aide of the honorable minister if the event had happened in Nigeria.