By Amebogist (self media writer) | 2 years ago 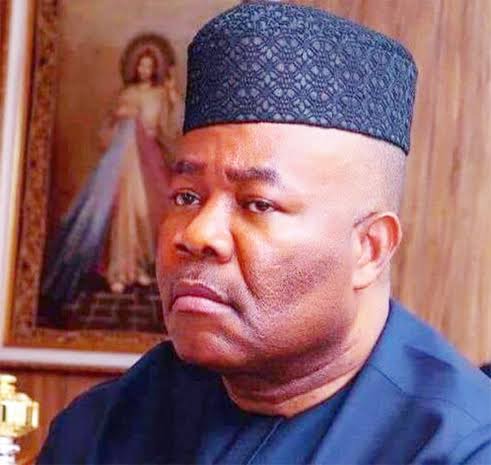 Senator Akpabio said that he had already instructed his lawyers to file the necessary appeals on his behalf with a competent court against Ms. Nuniel's defamatory statements.

Special Envoy of the Minister of Media, Anietie Ekong, said in a statement on Friday that Akpabio had instructed his lawyers to appeal to a competent court on his behalf against the defamatory statements made by the former head of the NDDC.

It should be recalled that Ms. Nunieh had made several accusations against the minister in an interview, which is already causing much controversy in politics.

In the statement, Ekong described Ms. Nunieh's accusations as a "cornucopia of false, malicious and slanderous allegations" and added that the Minister was willing to seek redress in court.

The statement said: "The Minister's initial position was to allow his lawyers and the judicial system to rehabilitate him for the false accusations made against him, but he is forced to respond to some of the idiosyncratic accusations that Ms. Nunieh has made against him, in particular the one concerning sexual harassment.

"First of all, let it be known that there is not a shred of truth in any of the accusations Mrs. Nunieh has made. They are simply false!

"The Honourable Minister has never at any time, place or circumstance made sexual advances against Ms. Nunieh, even to put herself in a position or attitude that would indicate sexual advances against Ms. Nunieh or employees of her Department or the NDDC."For the record:The honorable minister, Senator Godswill Akpabio, NDDC is happily married and happy with his wife.Together they are blessed with children, four (4) of whom are young women.

"The Honourable Minister is an ardent supporter of affirmative action, which was evident in his appointments between 2007 and 2015 as Executive Governor of Akwa Ibom State for two (2) terms.Under his supervision, he appointed a number of women to various high level positions such as

"The honorable minister has never hidden his admiration and respect for his wife, Mrs. Ekaete Akpabio, his children and sisters. Therefore, he felt obliged to respond to the malicious attack against him that Mrs. Nunieh had made following the allegations of sexual harassment.

"The Honourable Minister, therefore, finds the above allegation disgusting and a very cheap form of blackmail if Ms. Nunieh indicates or insinuates that he sexually harassed her while she was an acting director of the NDDC.

"The Honourable Secretary has taken steps to instruct her lawyers to file the necessary appeals on her behalf with a court of competent jurisdiction against Ms. Nunieh's defamatory statements.

"In conclusion, he encourages all Nigerians to hold their leaders to account and, at the same time, urges them to take the time to separate the wheat from the chaff before dealing with far-reaching allegations, opinions and views.

Content created and supplied by: Amebogist (via Opera News )