1) "Take The War To Their Doorstep"-IGP Orders Imo Police.

Recently, the Inspector-General of Police (Mohammed Adamu) stated that preliminary investigation has revealed that the overnight attack on the Imo State Police Headquarters and a correctional facility was carried out by members of ESN (Eastern Security Network) which was established by IPOB (Indigenous Peoples of Biafra). 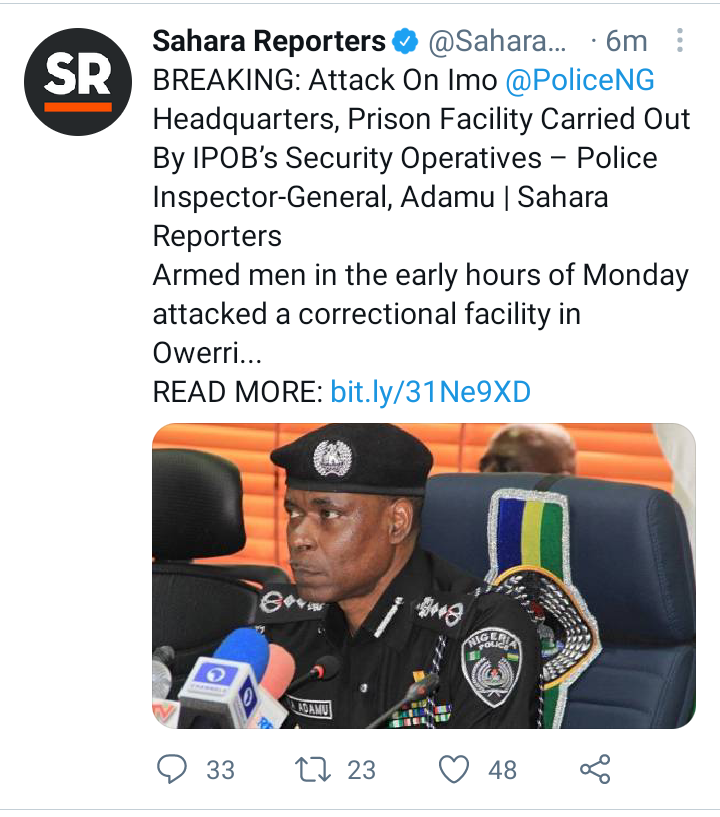 However, in a statement which CP Frank Mba, Force Public Relations Officer, issued on his behalf, the IGP directed the Commissioner of Police in Imo to carry out holistic investigations into the incident with a view to fishing out the perpetrators and bringing them to justice. 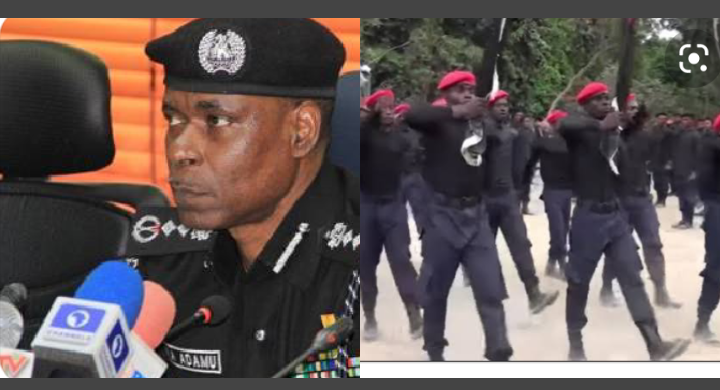 It's important to know that the IGP, who condemned the attack on the security outfits, has further directed the CP to harness the security reinforcement squads and other operational assets at his disposal to take the battle to the doorsteps of the attackers and prevent any further attack anywhere within the state and its environs.

"SaharaReporters" had reported how armed men in the early hours of Monday attacked a correctional facility in Owerri, the Imo State capital, freeing some inmates.

They also proceeded to the State Police Headquarters where they set ablaze the building and destroyed all vehicles within the vicinity.

As part of commitments to the upliftment of the youth and support for their development Governor Yahaya Bello of Kogi State has supported the youth-based National Sports Festival to the tune of N40 million. 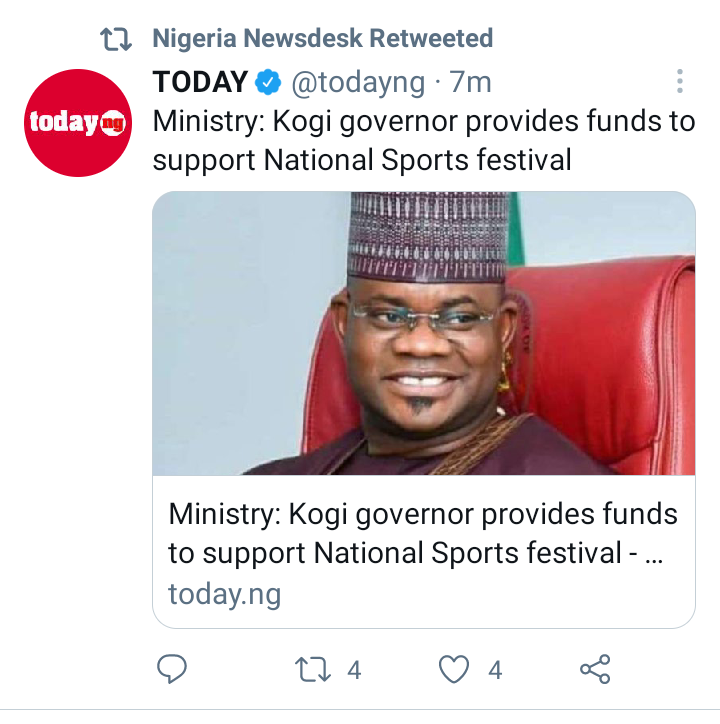 The Media Department of the Ministry of Youth and Sports Development disclosed this in a stamen made available to newsmen on Monday in Abuja, expressing appreciation to Governor Yahaya Bello.

According to the Ministry, the fund will go a long way in uplifting the youth who are the larger participants at the Festival as the Ministry will commit the Fund to provide feeding, transportation and ancillary support.

The Ministry expressed the belief that other state governors will emulate Governor Yahya Bello in supporting the National Sports Festival as a show of their support for the youth. 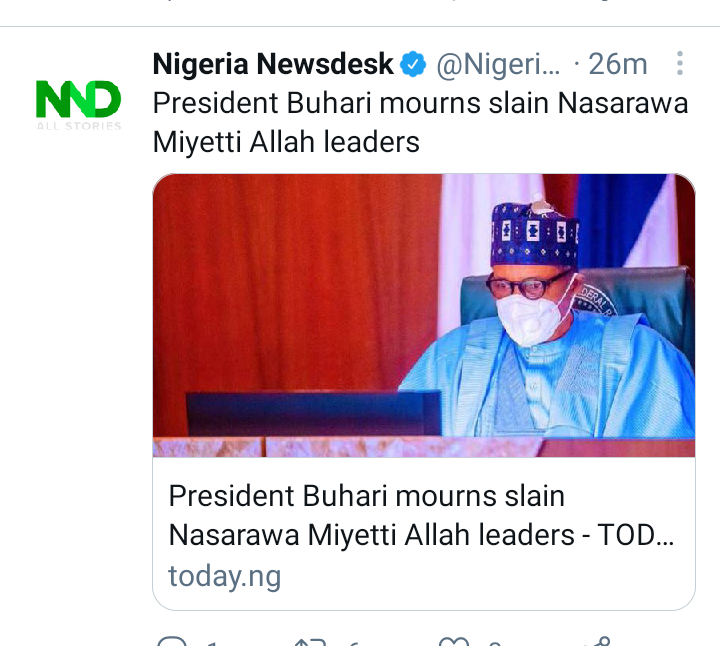 This was contained in a statement issued by the Senior Special Assistant to the President on Media and Publicity, Mallam Garba Shehu in Abuja, Monday.

President Buhari in the statement described the late State leader, Alhaji Mohammed Husaini who was among those murdered “as a beacon of peace for Nasarawa State and the subregion.

National Vice Chairman of the Peoples Democratic Party (PDP) in the South-South Zone, Chief Dan Orbih, has said that the ruling All Progressives Congress (APC) has no candidate worthy of winning the 2023 presidential election in Nigeria 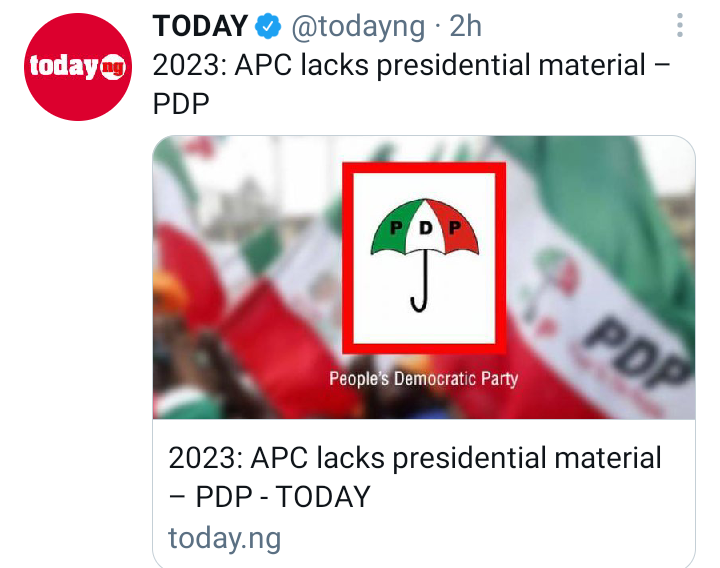 Orbih who spoke to newsmen in Benin on Sunday, said this was more evident since the ruling party was looking outside of its fold for a worthy candidate to represent the APC in the 2023 presidential election.

Chief Orbih was reacting to a story making the rounds that former President Goodluck Jonathan was being wooed to contest the Presidential election under the APC platform.

It's important to know that the worsening security situation in many parts of the country, occasioned by terrorist acts, banditry and kidnappings, has left many Nigerians unsure of their safety.

So, do you think APC has a Capable Presidential candidate for the 2023 presidential election?.