Governor Udom, what have you done for Annang people? (Opinion)

By De'analyst (self media writer) | 1 year ago 7 years ago, precisely in July 2013, the former state governor in the person of Senator Godswill Akpabio brought in a new secretary to the state government to replace the sacked secretary, Umana Umana. This new secretary as unknown to the political landscape of the state; put it this way “politics knew him not and he knew not politics”. Rumor had it that he was the personal accounts officer of the former governor so therefore there was that sense of trust and confidence bestowed on his person by Akpabio. And so from nowhere, Udom was brought into the state, and appointed as secretary to the government much to the chagrin of those who would have love to have their candidate in that position. Fast forward to 2014 when Akpabio was to leave office after having completed his two terms tenure in office as governor of the state, he made a choice of successor and anointed same and that person was no other than Udom Gabriel Emmanuel, and this time there was trouble in the political waters of the state as people did not agree with Akpabio on his choice of a successor but Akpabio reminded them of the zoning formula for governorship in the state and thus stuck to his guns and swore that come rain, come shine, Udom must be governor of the state. And that was what happened.

Udom rode to victory under the platform of the Peoples Democratic Party defeating 22 other candidates who were better suited for the job but because he had the backing of the incumbent, his path was cleared and he emerged victorious at the polls. And when he became governor, what did he do? He bit the very finger that fed him, and then began the war of words between him and his benefactor, just like it is playing out right now in Edo state. 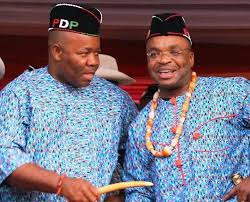 And when he re-contested for office in 2019, the polity was heated and as his benefactor could not stand the insults leveled against his person by his political godson, he defected to the All Progressives Congress and the same godson anointed a former deputy governor of the state and oiled his machinery with the sole aim of fighting his former boss and benefactor. Anywhere that is not my business. My business and I want to know, someone should show me one tangible project begun and completed in Annang land by the current administration. And please, don’t point to the numerous audio refineries jam packed in Ibibio and which is currently producing audio goods.