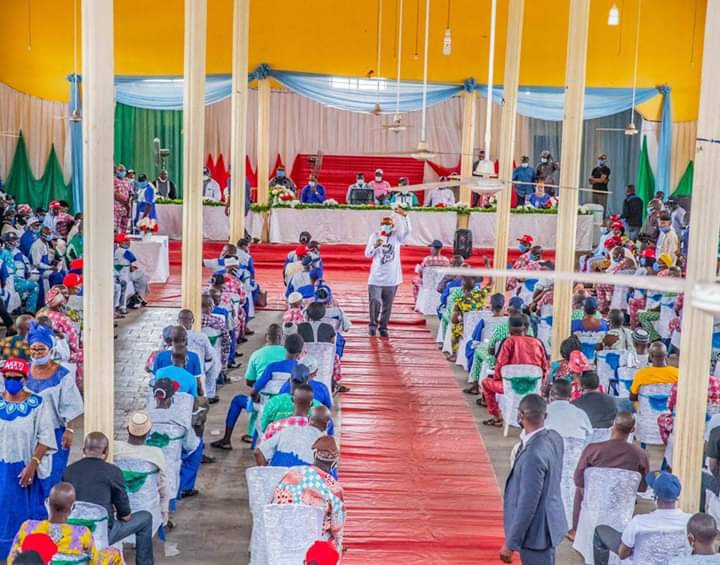 Ondo State Governor, Arakunrin Oluwarotimi Akeredolu, SAN, has rounded off his “meet the delegates tour” ahead of next Monday primary election of the All Progressives Congress (APC) in the state.

Governor Akeredolu, who rounded off the four – day tour with visit to Ondo South Senatorial district, visited the six local government areas in the district to canvass the delegates for votes and support.

At each of the local government areas, the Governor and his entourage received rousing welcome by party faithful and members of the public who turned out in large numbers to see the Governor.

The Minister of State for Niger Delta Affairs, Senator Donald Tayo Alasoadura, member of the House of Representatives, Hon. Timilehin Adelegbe, the Chief of Staff to the Governor, Chief Gbenga Ale and several other notable leaders of the party accompanied the Governor on the tour. Addressing the delegates in Ilaje Local Government, Governor Akeredolu said he was sure that the people of the local government will support him this time around.

He said his administration is passionate about the establishment of the Port Ondo which will finally be an economic turn-around for the state and secure the future of generations yet unborn.

In Okitipupa, the story was the same as the people turned out to give the Governor a rousing welcome.

Addressing the people, Arakunrin Akeredolu said: “When I got here, what got me angry the most was the way I met OSSUSTECH. The day I came I wept.That was the reason, the second week I ordered that the school roads should be tarred.

“The Vice-chancellor told me that the University is called citadel of abandoned project. Today, go there, we have completed the auditorium, Senate building and others.

“We have just started. The bypass we are constructing is for Okitipupa. It’s to eliminate traffic and accidents in Okitipupa. It’s a virgin road. There has never been a road there before. We are strongly determined to do more.”The Governor was received with funfair in Ese-Odo. The Governor said there are many things that have been done for the local government in terms of projects that have developed the area.

While addressing the people in Irele Local Government Area, the Governor said his administration would have commenced the bitumen exploration, but for the ravaging Covid-19 pandemic that has stalled the process.

“I thank you for I have not lost this local government before. If not for COVID-19, we should be working on your bitumen right now. All equipment has been brought here. The yards have been renovated. Once the bitumen exploration started, it’s an end to poverty.”

“In Irele here, we are constructing a 6.3 km township road, 1.5km intersection Ayeka Road, we have built thirty-three public primary schools by SUBEB, 14 Schools by inter- governmental and 14 micro projects by the European Union.”

The Governor walked into the warm embrace of the people in Ore, the headquarters of Odigbo Local Government Area. He said his administration has fulfilled its campaign promises to the people of the town.

“We promised during the campaign in 2016 that we will construct that bridge and we have done it. It’s not by our power, but by God. We have done it. We promised to fix this road, did we not do it? Is it not good like this? There are more to come. We will do more.” Akeredolu promised.

At the last stop in Ile-Oluji /Okeigbo local government, the Governor urged the delegates to vote for him come Monday.

He pointed to the roads his administration has constructed in the town, stressing that it was the beginging of great things to come.

SECURITY: The Police And Army Troops Need To Work With Vigilante Groups In The Fight Against Banditry

Why Ole Solskjaer might be sacked and here’s who could replace him.