Life And Biography: The Man Behind World War II(The Story Of Adolf Hitler)

By Anyi_babaTV (self media writer) | 2 years ago

He was born on the 20th of April 1889 in a small town in Austria called Braunau.

Hitler had originally wanted to attend classical high school and become an artist, but his father refused and sent him to Realschule in Linz, although he preformed badly in his school, cause he thought his father would pull him out and let him pursue his dream career.

At a very young age Hitler had developed a strong sense of loyalty towards Germany, he and his friends greeted themselves using "Heil" and refused to sing the Austria Imperial Anthem.

His father later died in 1903, and his mother then allowed him to apply for fine arts in Vienna in 1907,after two unsuccessful attempt, he was advised to study architecture but he was lacked the necessary credentials, because he had not finished secondary school, later in December 1907 his mother died of breast cancer while he was just 18, later in 1909 he lacked funds and lived in the street, he made little earnings from casual labour and by selling most of his painting.

By 5th February 1914 after medical assessment at Salzburg, he was deemed unfit and he returned to Munich.

He later got enlisted by August 1914 after the outbreak of world war I, he served as a dispatch runner in the western front in France and Belgium. He was also present at the battle of Ypres, battle of the Somme where he was wounded, battle of Arras, and battle of Passchendaele. By October 1918 he was temporarily blinded by mustard gas and during this period was when he learnt of the German's defeat. During his service at headquarters, Hitler pursued his artwork, drawing cartoons and instructions for an army newspaper. During the Battle of the Somme in October 1916, he was wounded in the left thigh when a shell exploded in the dispatch runners' dugout. 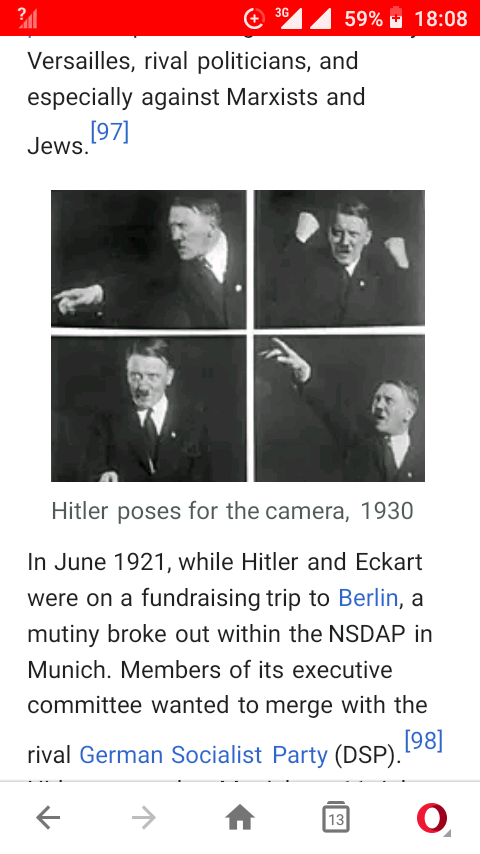 He was continually bittered by the outcome of the war, he believed the stab-in-the-back myth.

After world war I, Hitler was still a soldier and was tasked with infiltrating DAP (German's workers party), later changed to NSDAP ( National Socialist German's Workers Party), Hitler later joined the party and made his earliest known recorded statement in 16th September 1919, later by March 1920 Hitler was discharged from the army and he began working full-time for NSDAP.

In 1923 Hitler enlisted the help of world war I general Erich Ludendorff for an attempted coup known as "Bell Hall Putsch", Hitler wanted to imitate Benito Mussolini's "March On Rome" in 1922 by staging his own coup in Bavaria, on 8 November 1923, Hitler and the SA stormed a public meeting of 3,000 people organised by Kahr, where he announced that the national revolution had begun and declared the formation of a new government, the next day Hitler and his followers marched from the beer hall to Bavarian war ministry in a bid to overrun the Bavarian government but was intercepted by the police killing 4 police officers and 16 NSDAP members in a failed coup.

Hitler fled home and was arrested on the 11th of November, he was later charged with high treason and was found guilty and sentenced to 5 years imprisonment, of which he spent close to 2 years before he was granted pardon by Bavarian supreme court.

While at Landsberg, Hitler dictated most of the first volume of Mein Kampf (My Struggle ; originally entitled Four and a Half Years of Struggle against Lies, Stupidity, and Cowardice ), the book was an exposition of his autobiography and ideology.

In 7 April 1925 Hitler renounced his Austria citizenship (he was an Austrian by birth ).

In 16th February 1925 the ban placed on NSDAP was lifted and by 27th February Hitler was barred from speaking in public gathering.

In February 1932 Hitler was appointed adminstration to delegation to the Reichsrat in Berlin, making him a citizen of Brunswick, and thus of Germany ( after renouncing his Austria citizenship he was stateless, a citizen of no country).

At the risk of appearing to talk nonsense I tell you that the National Socialist movement will go on for 1,000 years! ... Don't forget how people laughed at me 15 years ago when I declared that one day I would govern Germany. They laugh now, just as foolishly, when I declare that I shall remain in power!

— Adolf Hitler to a British correspondent in Berlin, June 1934 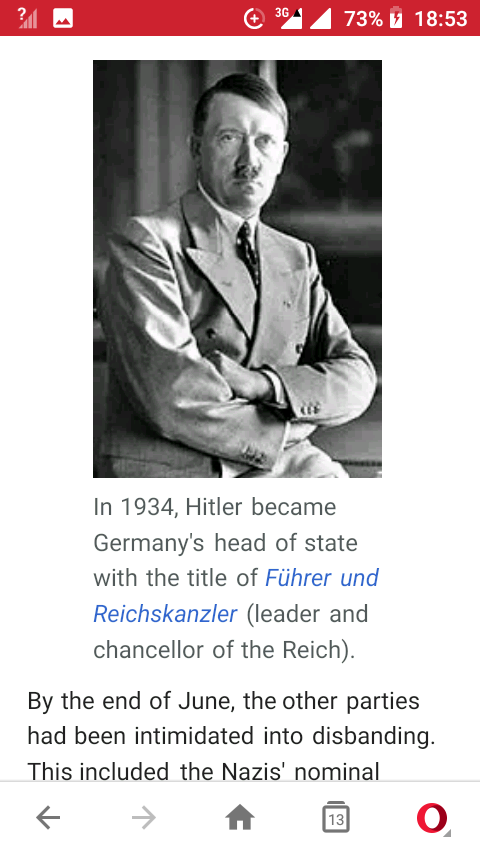 Hitler with the aid of his followers continually growed and accumulated power over the period of years crushing rivals and setting up laws and reforms not favourable to others, by 14th July 1933 NSDAP was the only legal party in Germany. After the death of Hindenburg a law was enacted abolishing the position of the president and merging it's powers with the chancellor making Hitler the head of state and as well government ( leader and Chancellor).

I will in a article I intend writing soon tell you about the world war II and Hitler involvement, how it ended and how Hitler died, also apart from being erratic and later making wrong decision he was a good leader to the German's.

Content created and supplied by: Anyi_babaTV (via Opera News )