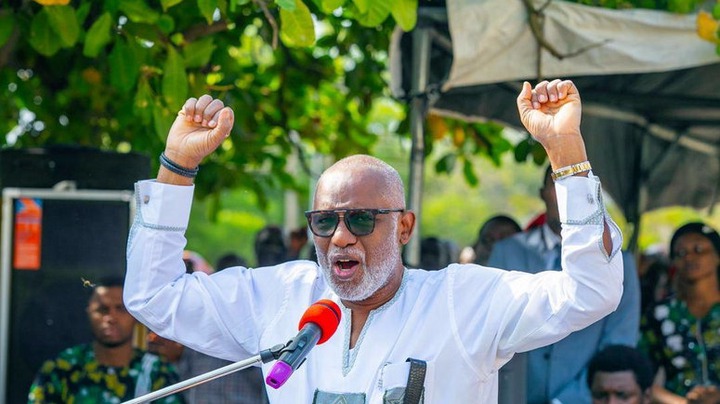 Ondo State governor, Rotimi Akeredolu, is one step closer to realising his second term ambition after winning the ticket of the All Progressives' Congress (APC).

The governor swept to overwhelming victory in the party's primary election which took place in Akure, the state capital, on Monday, July 20, 2020.

The governor polled 2,725 votes and won in all 18 local government areas of the south western state, putting a huge distance between himself and the seven other aspirants who contested. Pondei fainted on Monday during a session of the house of representatives committee probing the alleged mismanagement of N81.5 billion by the interim management of the NDDC.

In a statement, Charles Odili, the commission’s director of corporate affairs, said Pondei collapsed because he ignored his doctors’ advice not to attend the session.

“The commission wishes to disclose that Prof Pondei has been ill for the past two weeks. This morning, his condition deteriorated, and his doctors advised against attending the hearing,” he said.

“However, he ignored his doctors’ advice because of the realisation that his traducers will use his absence at the hearing to soil his name and reputation.

“He thought he could make it through the hearing and take care of his health later. As it turned out, his doctors were right. Prof Pondei is in a stable condition at a clinic in Abuja.”

Odili said Pondei who assumed office in February had spent his tenure under COVID-19 conditions.

He added that Pondei has an official duty to answer for the activities of the commission and what happened between 2008 and 2012 “which is the subject of another hearing based on the auditor general’s report for the period.”

Femi Gbajabiamila, speaker of the house of representatives, had said Pondei will no longer appear before the panel probing him.

While wishing Pondei a quick recovery, the speaker apologised over the poor condition of the hearing room which was stuffy.

“We wish him well. I have been here barely five minutes and I am already sweating profusely. So I do understand and apologise to everybody here for the poorly conducive atmosphere. I want to say at this point and make it clear, that is not an adversarial hearing. It is not even inquisitorial,” the speaker said. Fayose says Akpabio and others must be fully investigated and charged to court if found culpable.

Former Ekiti State governor, Ayodele Fayose, has once again rubbished the credentials of President Muhammadu Buhari to fight corruption in the country.

His latest comments come in light of investigations into the activities of the Niger Delta Development Commission (NDDC).

Officials of the NDDC have been under probe for mismanagement of funds allocated to the commission which is under the supervision of the Ministry of Niger Delta.

The Minister of Niger Delta, Godswill Akpabio, was one of those who made presentations before a House of Representatives committee investigating the allegations on Monday, July 20, 2020.

Speaking on Akpabio's alleged role in the scandal, Fayose said the minister has further made a mess of President Buhari's famous self-professed fight against corruption.

He said the fight is only a public ruse and targets only members of the opposition that are not in Buhari's 'family of corruption'.

Buhari says the death of his longtime friend and associate will create a huge gap.

Funtua, a minister in Nigeria's Second Republic, died after a brief illness on Monday, July 20, 2020.

President Buhari described Funtua as a longtime friend and associate who consistently stood by him in his political journey.

He said his death will create a huge gap, according to a statement signed by his spokesperson, Garba Shehu, on Monday. The Peoples Democratic Party says Kemebradikumo Pondei, acting managing director of the Niger Delta Development Commission (NDDC), slumped at the house of representatives because of the weight of corruption under the current administration.

The national assembly is currently investigating the alleged mismanagement of N40 billion by the interim management committee of NDDC.

Pondei fainted while he was being grilled by the panel on Monday.

In a statement by Kola Ologbondiyan, PDP spokesman, the party said it was obvious that Pondei collapsed “under the weight and shame of overwhelming collective guilt brought on him by the exposure of massive corruption being perpetrated by NDDC officials and APC leaders”.

“It is revealing that Pondei could go no further in the face of scathing revelations of direct pillaging of resources meant for the development and welfare of the Niger Delta people, in an unbridled corruption racket in which the Minister of Niger Delta Affairs, Godswill Akpabio, also stands accused,” the party said.

“It is rather curious that Prof. Pondei slumped after lawmakers demanded that he offers explanations on the contentious payment of billions of naira, alleged unbudgeted sums, to certain companies by the NDDC.

“This is particularly as Nigerians recall that the embattled NDDC boss had, last week, stalled proceedings by challenging the legislators and walking out on the House of Representatives investigative panel.

“The situation in the NDDC is just a tip of the iceberg on the humongous corruption, looting spree and concealment going on in ministries, department and agencies of government being perpetrated by APC leaders and their cronies.”

PDP called on President Muhammadu Buhari to sack Godswill Akpabio, minister of Niger Delta affairs, and to also disband the NDDC interim management committee “if he indeed desires the coordinated probe he ordered to yield any credible results”.

The party urged Buhari to “note that the people of the Niger Delta region, who are being deprived of their welfare, are following the development with keen interest”.

“Moreover, the entire nation and indeed the global community are watching the handling of the NDDC as well as the EFCC fraud saga by the Muhammadu Buhari administration,” the party said.

“They are watching the unfolding drama, the rigmarole and veneers of concealment by corrupt officials and APC leaders.”