JUST IN: 10 Most talked about Major News In Nigeria

By POINTS (self media writer) | 2 years ago 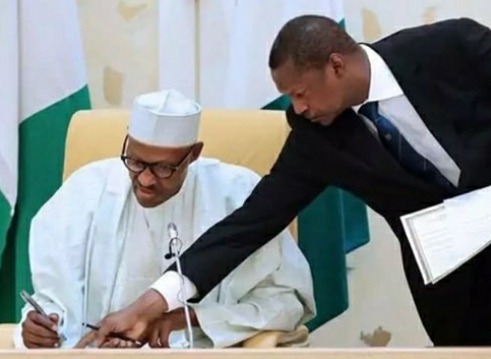 Here are some of the news that you should not miss this today.

The Rivers State Governor, Nyesom Wike, who prevented the police from taking Nunieh away, reacted angrily and asked the Inspector General of Police, Muhammed Adamu, to probe the invasion of the former NDDC boss.

The family of Tolulope Arotile, the late first Nigerian female combat pilot, and the Pan-Yoruba socio-political organisation, Afenifere, on Thursday rejected the accident theory of the Nigerian Air Force as the cause of the death, calling for a probe.

The House of Representatives on Thursday met with stakeholders in the education sector on the ways schools could be reopened to allow pupils sit the West African Secondary School Certificate Examination.

Nine of the nation’s 27 power plants were idle on Thursday, leaving a total generation capacity of 2,079.1 megawatts stranded.

The suspended acting Chairman of the Economic and Financial Crimes Commission, Ibrahim Magu, on Thursday expressed confidence that he would be reinstated to office.

The Federal High Court in Lagos on Thursday reversed its order forfeiting to the Federal Government two houses in Ilorin belonging to a former Senate President, Bukola Saraki.

8. Only mosques, churces with approvals will reopen - Ekiti

One Jubril Anifowose, on Thursday, appeared before an Osun State Magistrates’ Court sitting in Ile-Ife for allegedly abducting his neighbour’s wife and children.

Wycombe Wanderers big striker, Adebayo Akinfenwa, has jokingly said the unavailability of his kit size in the Nigerian national team may have played a role in his inability to get a call-up to the Super Eagles in 2003, but admitted that the country was blessed with a lot of talents.

Content created and supplied by: POINTS (via Opera News )