By Prinncce (self meida writer) | 1 months 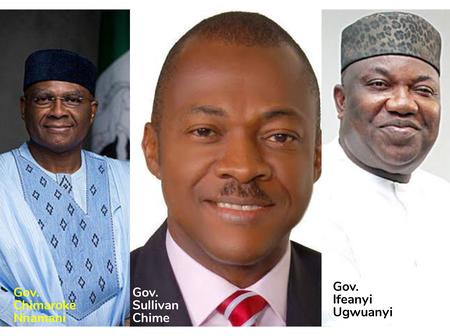 Nigeria’s political atmosphere is already heating up. Camps are pitching tents. Consultations from the north to the south, and from the east to the west are already gaining momentum across the Niger. Symposia, birthday parties, lectures, titles, etc., are all being held and taken from different political bigwigs from distinct ethnic groups. Frantic attempts to exchange handshakes across the Niger are ongoing. All these gestures, we were told, were being bankrolled by political allies. Even a whole State House of Assembly has passed a resolution to compel a certain governor to success Mr. Muhammadu Buhari in 2023.

Pressures are already on mounting on some people to run. Whether these pressures are as a result of external forces or intra-introspection will become clearer as political coastline crystalizes. Rumours, being the first political tool wrapped in propaganda are already flying high, driven by supporters of political heavyweights. There have been arguments on whose turn it is to steer the Nigeria statecraft. Interesting arguments are streaking out daily from sectional apologists and alleluia “boys” . This shows that interesting days are ahead.

In every nook and cranny, different political formations are surreptitiously springing up from political gladiators. Establishments are aligning and realigning. New establishments are also positioning strategically to displace the old order, as each section, camp, ethnic group and zone is laying claim to the right to power.

Unfolding events are revealing that the battle for the soul of 2023 in Nigeria is going to come with a sweeping effect. Many will be taken by surprise. Gladiators will be swept off by emerging political class. It will be a war that will be strategically fought and tactically won. This time, neither gun, machete, axe nor IED would be the determining weapons. It will be a game dictated by integrity, character, principle, established custom and practice.

Interestingly, the most important and often preferred custom usually referred to nationwide has started causing rupture and uneasiness in some camps. From the national level to the state level, beneficiaries of this established and well-decorated custom at one time or the other have suddenly made a comeback to thwart it, and have the existence of the custom either denied or redefined to suit whatever reason might be appeasing to their egocentric pursuit.

Months ago, President Muhammadu Buhari's nephew, and one of the “Shadow Ministers and a member of the Kaduna Mafia” in the government, Mr. Mamman Daura, has come out to condemn and rubbish the custom for which he fought and advocated for against the then Mr. Goodluck Jonathan’s administration. He, alongside President Buhari's ardent supporters, had threatened revolution if the principle of “zoning” was not respected by the south.

Between 2014 and 2015, it was predicted by the United States that Nigeria would cease to exist. However, the collective will of Nigerians prevailed, and Mr. Buhari of the northern enclave was elected President. The United States’ prediction kissed the rock. This prediction that went directly to the very foundation of Nigeria as a sovereign State could only be displaced by zoning; a gentlemanly agreement. There was a relatively peaceful and secure political atmosphere. Many hailed it as a spirit of zoning and constitutive democracy in action. For political watchers, this zoning principle, although, unwritten, has ensured equity, justice, peace, and national unity.

In 2020, when the then national Chairman of the All Progressive Congress and former Governor of Edo state, who himself was a gracious product zoning, Comrade Adams Oshiomole, stood up against equity, justice and fairness on the pretext that his estranged godson had gone rascal and in breach of, perhaps, unspeakable anti-people's agreement clandestinely reached, the people of Edo state wasted no time but quickly retired him from politics. In disbelief, he was given a bloody nose and plucked down from fame and glory.

Today, the trend and the clamour from different quarters is a continuous call for power brokers to respect the democratic principle that allows power to rotate among the people; both majority and minority ethnic groups, for the purpose of enthroning justice, and assuring the spirit of belongingness.

In recent times, leaders from different ethnic nationalities have been beckoning on the administration of President Buhari to consider a Nigerian president of Igbo extraction from the south eastern zone. Prominent figures from the Northern Elders Forum, Afenifere leaders, Middle belt leaders, and the Ijaw nation have lent a strong voice to the call for the south easterners to be considered for equity and Justice sake.

From the throe of the south east are sons and daughters of the zone making a strong case for the Igbo man to be unanimously nominated and elected President of the country come 2023. These people making this call include the high ranking Senator representing Enugu West senatorial zone, Senator Ike Ekweremadu, Chief Chukwuemeka Ezeife, Chief Nnia Nwodo, Senator Enyinnaya Abaribe, and of course, the leadership of the Igbo socio-cultural organization, Ohaneze Ndigbo. Analysts have seen the recent agitation and mild unrest from the shore of the east as the resultant effect of marginalisation, abandonment, entrenched injustice and deviation from zoning.

In a report by the Pacesetter Magazine, Chief Obaze Oseloka, a governorship aspirant in the forth coming Anambra state Governorship Election, like other Anambra concerned citizens, have been vehemently arguing for the governorship slot to be zoned to Anambra South. He hinged his support to equity and natural Justice. Every progressive society must come to term with the principle of democracy, of which zoning is a part.

Of a particular interest about zoning arrangements is the role it has played in maintaining political equilibrium and stable order within the system in Enugu state. But recent developments in the state are becoming more interesting by the day as some of the greatest beneficiaries of the long established zoning and rotation of offices in the state among the three senatorial zones are beginning to question the established order. Quisling. To them, zoning has become archaic, out of tune with civilisation, and should not be allowed to fly by every right thinking individual. Ironically, these set of people, it would appear, have been championing and clamouring for a Nigerian President of Igbo extraction based on the equitable zoning formula.

How the Nigerian idol's Elimination episode went down.

Nigeria Idol: Check Out The Contestants That Made It To The Top Nine And Those That Didn't Make It