Thousands gathered in Bangkok streets to protest against Thailand's government

Thousands gathered in Bangkok streets to protest against Thailand's government 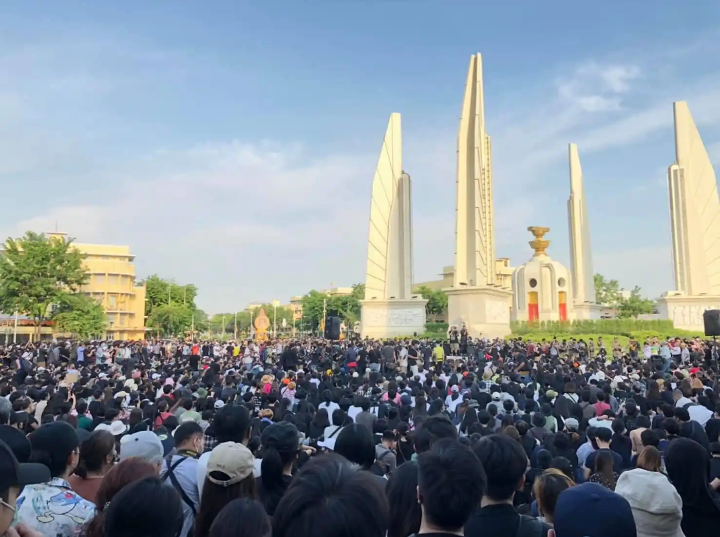 Thousands of young Thai protesters came together on Saturday at Bangkok's Democracy Monument in a show of mass public opposition to Thailand's royal defamation law. This comes as the country's economy continues on a downward trend due to the COVID-19 pandemic. The demonstrations, which were the city's largest and rowdiest anti-government protest in years, went on until late into the night before being called off at midnight due to safety concerns, according to the Bangkok Post.

With the economy in freefall, anger is boiling against a government stacked with elderly former generals and supporters of the royalist establishment. The crowd of students sang vitriolic anti-government rap songs and waved placards denouncing the administration of former army chief Prayut Chan-O-Cha -- and calling for the abolition of Thailand's strict royal defamation law.

The protesters wore a black uniform, which several said was borrowed from the pro-democracy protests that rocked Hong Kong last year.

The government doesn't care about us, so either we come out or we lose anyway,' said an 18-year-old student called Sang, giving one name only.

'The laws protect the rich and leave the people with nothing

Placards saying 'end 112' were held up in a rare mass public opposition to Thailand's royal defamation law -- the number a reference to the section of the criminal code it falls under -- which protects the monarchy and its unassailable, super-rich King Maha Vajiralongkorn from criticism.

The protest ended at midnight, according to the Bangkok Post

The demonstrations were called off because of safety concerns and the lack of facilities and public utilities to accommodate the large number of people who joined the rally. The rally ended peacefully. Nobody was detained or charged.