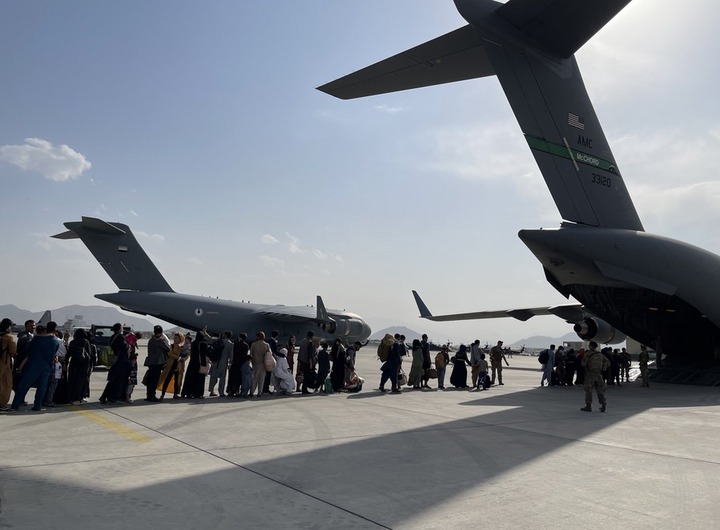 People queue up to board a military aircraft of the United States and leave Kabul at Kabul airport, Afghanistan, Aug. 22, 2021. (Xinhua)

The situation in Afghanistan has been on a drastic change recently. The chaos in the country, which is a result of the hasty withdrawal of the US military, is one of the deepest impressions left on the world by the war in Afghanistan.

The strategic failure of Washington's policy on Afghanistan fully proves that hegemonism and power politics will never be supported.

The "neo-interventionism" of the US is destined to fail. That's what the 20 years of warfare in Afghanistan told us. In October 2001, the US entered Afghanistan with its allies under the banner of "counter-terrorism," and the following 20 years, or what's known as the longest war in the history of the US, not only tremendously consumed the US, but also brought huge disasters to the people in Afghanistan.

Over the past two decades, the Afghan War cost Washington the lives of more than 2,400 service members and over $2 trillion. What's more, the counter-terrorism banner became the butt of a joke, as the number of terrorist organizations in the country surged from a single digit to over 20.

"Failure" is a word frequently used by Western politicians and media to describe the war in Afghanistan. "We believed that we could shape the world in our image using our guns and our money," said a recent article published on the Washington Post, adding that US and its allies got it really wrong from the very beginning. "The bar was set based on our democratic ideals, not on what was sustainable or workable in an Afghan context," the article continued.

The two-decade warfare in Afghanistan showed that the US was a destroyer, not a constructor. In the past 20 years, more than 100,000 Afghan civilians were killed and wounded by the guns of the US and its allies, and more than 10 million displaced. The war caused an average loss of $60 million on a daily basis, putting a drag on the socioeconomic development of Afghanistan. Around 72 percent of the people in Afghanistan were living below the poverty line, and 38 percent unemployed.

Afghans are disappointed with the US, because what the latter has left in their country are only warfare, destruction and poverty, said an Afghan political analyst.

US President Joe Biden said that US mission in Afghanistan was never supposed to be nation-building. It was self-mockery, but true also, as in every country the US armed forces have been to, be it Iraq, Syria or Afghanistan, there are turbulence, separation and destroyed families.

The 20-year Afghan War once again proved that values forced upon other nations and civilizations will never be able to last, and hegemonic and military solutions will only lead to more problems.

America's epic Afghan failure shows that its naive belief it can cure the world's ills with democracy, dollars, and M16s is wrong, said Tom Fowdy, a British political and international relations analyst. German Chancellor Angela Merkel also admitted that the efforts to bring democracy and peace to Afghanistan have failed, therefore lessons should be drawn.

The hasty withdrawal of the US military from Afghanistan further destroyed the international credibility of the US, and triggered questioning and criticism from American allies.

French newspaper Le Figaro said the Europeans have to pay a high price for the US failure. The Financial Times noted when US forces began military action against Afghanistan, British and other NATO troops joined them. America's withdrawal 20 years later, giving NATO allies little option but to pull out, delivers a double blow to the alliance. It has simultaneously laid bare the extent of NATO reliance on the US and raised doubts about future American willingness to provide support to its allies. Afghanistan’s rapid unraveling is reinforcing the idea that America’s backing for its allies is not unlimited, said the New York Times.

History doesn't repeat itself, but it rhymes. However, from the Vietnam War to the Afghan War, the US was seemingly repeating its history. Given the similar failures of the US in these wars, the country should have a moment of introspection on its arbitrary military intervention and war-like mentality, and stop interfering in the domestic affairs of other countries and stop undermining the peace and stability of other countries and regions under the banner of the so-called "democracy" and "human rights."

(Zhong Sheng is a pen name often used by People's Daily to express its views on China’s foreign policy and international affairs.)