Why Some Northerners Will Surely Continue To Oppose Southern Presidency 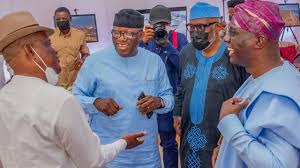 Photo: Cross section of Southern Governors, culled from the Cable

Ahead of the 2023 General Elections, major political gladiators and prominent politicians have been making contributions to various political factors that may determine who will, surely, emerge as the next President of the Federal Republic of Nigeria.

Owing to the above point of discussion, many strategic factors are being subjected to consideration by some political opinion moulders, from both the Northern and Southern part of the country.

However, there two major points that may discourage some Northerners from supporting the emergence of the President of the Federal Republic of Nigeria from the Southern part of the country.

One, the decision by the Rivers State and Lagos State Governments to take over the collection of Value Added Tax (VAT) from the Federal Inland Revenue Service (FIRS) may be considered as a major reason that may discourage some Northerners from ever supporting the return of presidential power to the Southern part of the country.

It could be recalled that majority of the Southern Governors are not, specifically, worried as their Northern counterparts on the movement to stop the collection of the Value Added Tax (VAT) by the Federal Inland Revenue Service (FIRS).

Considerably, some Northerners are not happy with the movement by some Southern Governors to stop the Federal Inland Revenue Service (FIRS) from collecting VAT. They see the movement as an attempt to further threaten or expose the poor economic viability of some of the Northern states.

Secondly, the decision by majority of the Southern Governors to promulgate Anti Open-Grazing Law could be considered as another reason some Northerners may not want to, holistically, support Southerner to emerge as the next President of the Federal Republic of Nigeria.