By Hanmike (self media writer) | 3 months ago

Check 3 ways the South can take power from the North without a need for secession.

Nigeria is well known to be the African biggest country, in terms of population, and economy. The country that boasts 36 states is divided into 6 geo-political zones, which are the Southwest, the Southeast, the South-south, the Northwest, the Northeast, and the North Central region. 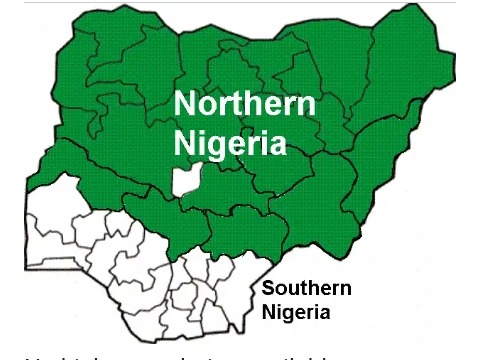 In a nutshell, the country is further divided into two geographical sections, which are the North and the South. The North has 19 states in it also includes the Federal Capital Territory, while the South has 17 states.

The South and the North are autonomous divisions of Nigeria, distinctly different from each other, with independent traditions, foreign relations, and security patterns.

However, northern Nigeria has been alleged to be accumulating power, leaving the other regions to feel cheated. The North-South power imbalance is a major reason some Southern indigenes have been calling for a breakup. Some are demanding to restructure, while a number of them are asking for a referendum.

Before discussing how the South can permanently gain power from the North, there will be a need to first analyze the advantages the North has over the South. What gave the North an upper hand over the South? How does Northern Nigeria emerge as the more powerful region? What are some factors that helped them to gain dominance?

Firstly, it is the landmass and the high population that makes the North an automatic champion. This advantage has given them a high voting power, and ultimately, the chance to determine who wins elections.

What follows the population advantage, apart from the high voting power is the allocation of federal resources. High resources allocation tends to go to the region with a higher population. With the favorable allocation of resources, the North is, however, unable to generate reasonable revenue from the Value Added Taxes.

They Understand the Power of Unity

Another advantage the North has over the South is that they were always found with one voice. Apart from the fact that they speak one common Hausa language, they seem to have the same goals and focus. Southern Nigeria does not have a single general language, except English and pidgin. The people in the North seem to understand and always agree with one another.

Having realise all these, what can the South do to gain some influence over the North? How can the southern Nigerians free themselves from the dominance of the North?

The Power of Unity

It is almost believed that the Southern people can never be united like their Northern counterparts. This might be the case because they are distinctly different from each other, concerning their independent traditions, culture, languages, and beliefs. It is however mandatory for them to start having one voice, or else, they will continue to serve as slaves together.

It is not as if southern Nigeria is very low in population. Under credible census and election, the population of Lagos state should be above 25 million, but only 40 to 50 percent will come out to cast vote or to be counted. If the souther people also come out massively to cast their votes the way the Northern do, they too will have a little higher voting power and will have a better chance to enthrone whoever they prefer to be their candidates.

The southern people believe they are more educated and more knowledgeable than the Northern, and relying on all these has never helped them in achievement dominance. The earlier they lay hold of the adage "Knowledge pass Power", the better for them. Several of them believe they are too big to go out and be counted, or they are too busy to go and join the queue and cast their votes.

If all these erroneous attitudes were corrected, the South will surely bounce back, and the North will cease to dominate them. When spiders unite, they can tie up lions. Only unity can achieve this, as well as creating a better population impression, like their northern counterparts, and focusing less on their knowledge.