By JDSports (self media writer) | 2 years ago 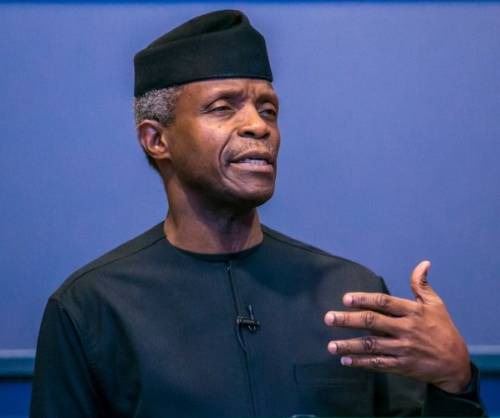 The Nigerian Supreme Council for Islamic Affairs (NSCIA) has described Vice President Yemi Osinbajo as the pride of Nigeria. The Secretary General of the council, Ishaq Oloyede said, the Vice President has successfully combined both his religious commitments toward God with public administration; remarking such as a quality worth emulating.

Vice President Osinbajo who gave a keynote address at the opening ceremony of the General Assembly of the NSCIA was lauded for his commitment to the country. Oloyede said; “He is a model of a person combining religious commitment with public administration. He has done that creditably well. Mr. Vice President we want to thank you on behalf of the Muslim community of this country. You are a pride to this nation, we thank you and pray that God will continue to be with you.”

Another speaker, in the person of the President-General of NSCIA and Sultan of Sokoto, Muhammadu Sa’ad Abubakar, applauded the Vice President for his leadership, which he testified could have only been given to him by God. “We have the privilege of having the Vice President here, who is a pastor…He has leadership given to him by God Almighty, it is a trust and responsibility, and he is here in his capacity as VP, and we invited him to give the keynote speech as VP of Nigeria, and he accepted,” the Sultan of Sokoto said.

In his keynote address, Vice President Osinbajo commended the NSCIA for bridging the religious gap in Nigeria. “This Council is of particular importance to us as a nation because it not only promotes solidarity among Nigerian Muslims, but also serves as an important intermediary between the government and the Muslim community, and between Muslims and persons of other faiths." The Vice President further added that, "as the highest decision-making body of the Council, I offer to you this morning, both a commendation and a challenge. First, the commendation to you for the great leadership you have shown in galvanizing the Muslim community in Nigeria despite denominational differences. The challenge stems from the theme of this meeting which is “Islam and National Development.”

What do you think of the Vice President, Yemi Osinbajo on this regard?

Content created and supplied by: JDSports (via Opera News )