By Kannywoodgist (self media writer) | 1 year ago 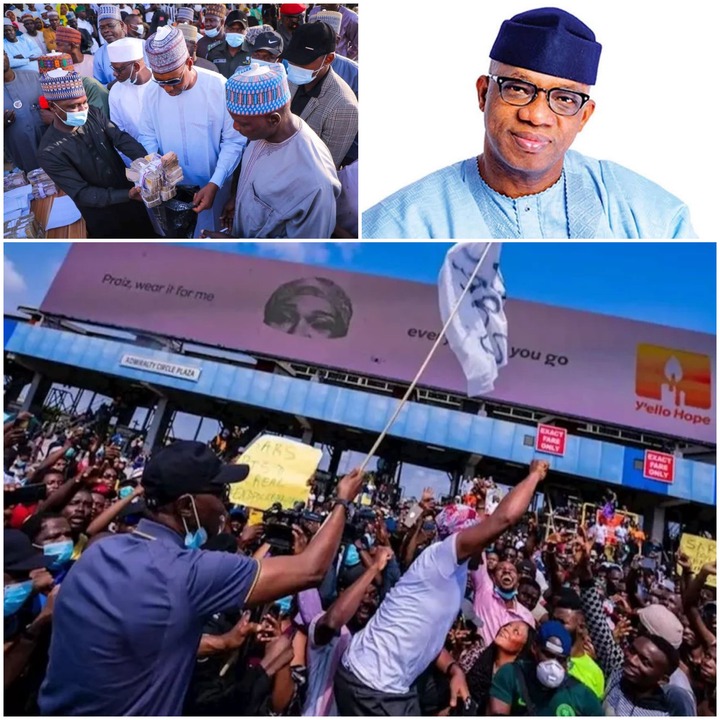 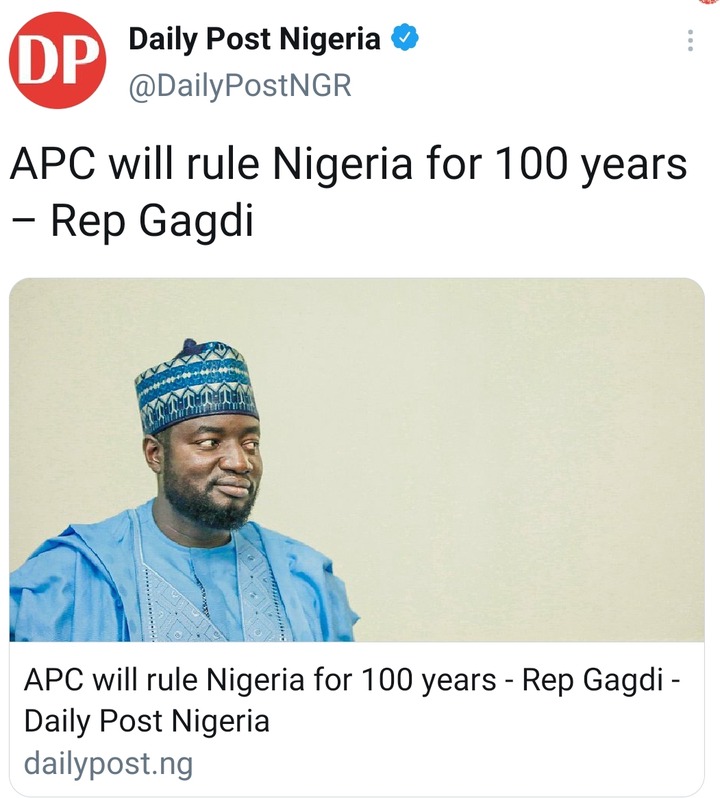 A House of Representatives member, Yusuf Gagdi says the All Progressives Congress (APC) will hold power in Nigeria for 100 years.

He spoke after revalidating his membership of the APC in Gum-Gagdi in Kanam Local Government Area of Plateau State.

The lawmaker stated that the party has been gaining momentum since 2015.

Gagdi said APC’s performance over the years would make Nigerians vote for the platform in the 2023 general elections and beyond.

“From the crowd you have seen here today, it is clear that APC, our party is on ground. Though God decides what happens, but with the achievements at various levels, we will retain power beyond 2023. 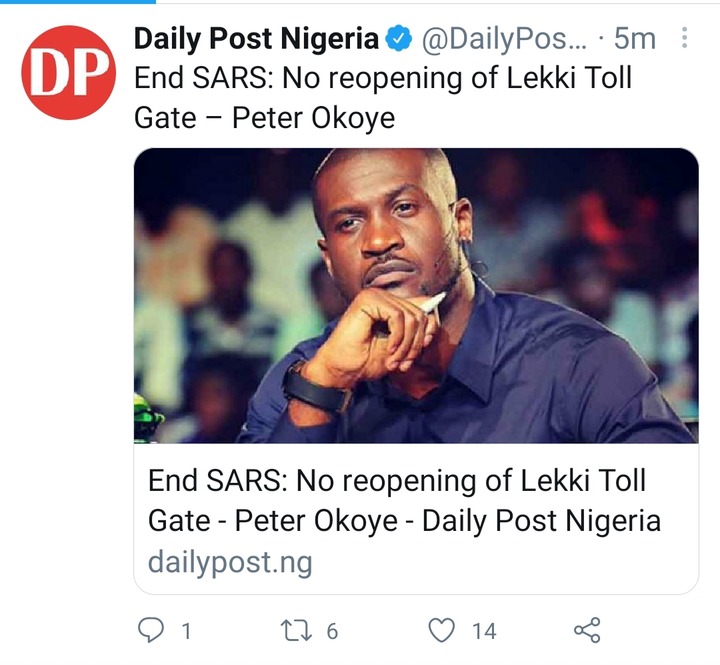 Peter of defunct group, ‘P-square’ has joined many Nigerians in rejecting the approval for reopening of Lekki Toll Gate.

The Lagos State Judicial Panel of Judicial Inquiry probing the alleged killing of #EndSARS protesters by soldiers at the Lekki tollgate on October 20, had approved the reopening of the toll plaza, and returned control of the Lekki toll gate plaza to its owners, the Lekki Concession Company (LCC).

The Chairman of the panel, Justice Doris Okuwobi, delivered the ruling on Saturday.

However, youth representatives kicked against the decision, describing it as an act to obstruct justice.

They opined that the Lekki toll gate should remain shut till investigation is concluded by the judicial panel.

Peter Okoye, reacting, kicked against the ruling, declaring that the toll gate will not be opened until justice is served.

The singer made this known on his Twitter page.

His tweet read: “If una like make una go hand over Lekki tollgate to Jesus( If you like handover toll gate to Jesus) No justice, NO LCC.

“Make them no think am! We will never forget what happen at that Tollgate on the 20th of October 2020.” 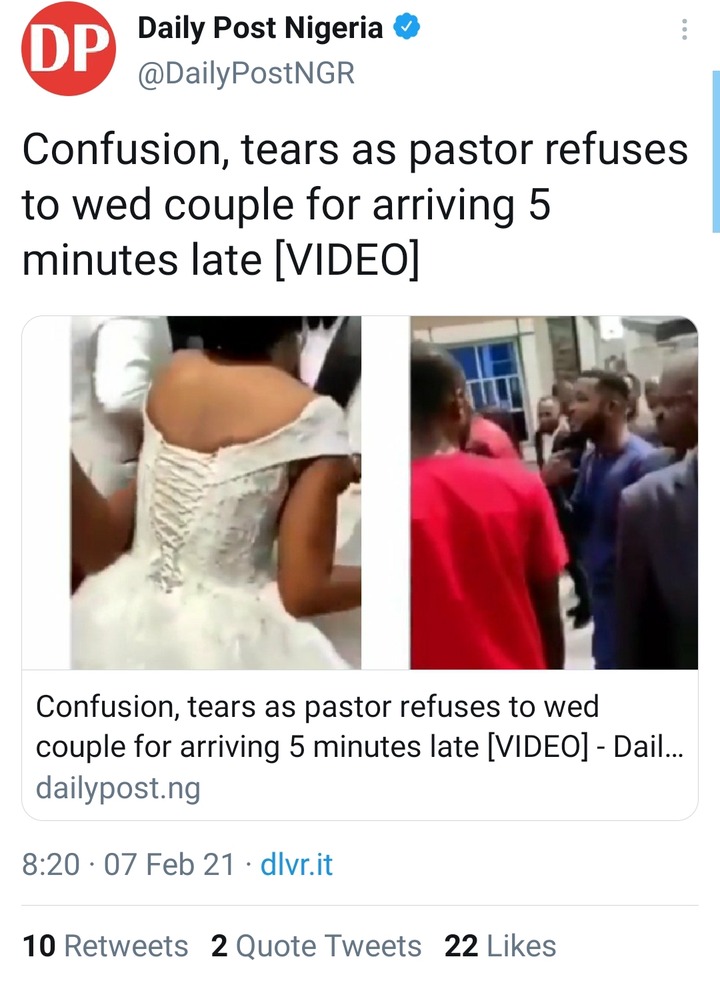 There was a mild drama at the Fulfilling World Foundation Church, Port Harcourt, Rivers State, on Saturday as the senior pastor, Essay Oggory, refused to wed a couple after they arrived 5 minutes late to the venue of their wedding.

In a viral video, the pastor can be seen walking out on the couple.

Families, friends, and well-wishers of the couple, who were at the church for the occasion, were left in shock.

The bride cried uncontrollably as she could not believe what was happening.

However, the pastor was said to have returned to wed the couple after much pressure on the condition that the wedding will happen in his office and not the church auditorium.

The couple rejected the condition and were seen leaving the church compound in their cars. Governor Babagana Umara Zulum is currently in Gwoza local government area of southern Borno for humanitarian and developmental activities, which began on Friday. After passing the night in the town, Zulum on Saturday, shared N150m as soft loans and grants to small and medium scale traders.

The Governor explained that, the loan/grant with refundable period of four years, is meant to resuscitate businesses and livelihoods destroyed by the Boko Haram insurgents in communities of Gwoza.

Zulum announced that any beneficiary that is able to repay 50% of his or her loans within record time, will enjoy waver of the balance of 50%, while those who deliberately fail to repay within the dateline will be made to repay 100% of what they received as loans and grants.

Before embarking on his trip, Zulum had deployed dozens of trailers loaded with varieties of food items to Gwoza, for which he is directly supervising distribution.

The facility is expected to increase access to public healthcare for villagers in Kawuri, one of the communities where internally displaced persons have been resettled in more than 500 newly built resettlement houses. 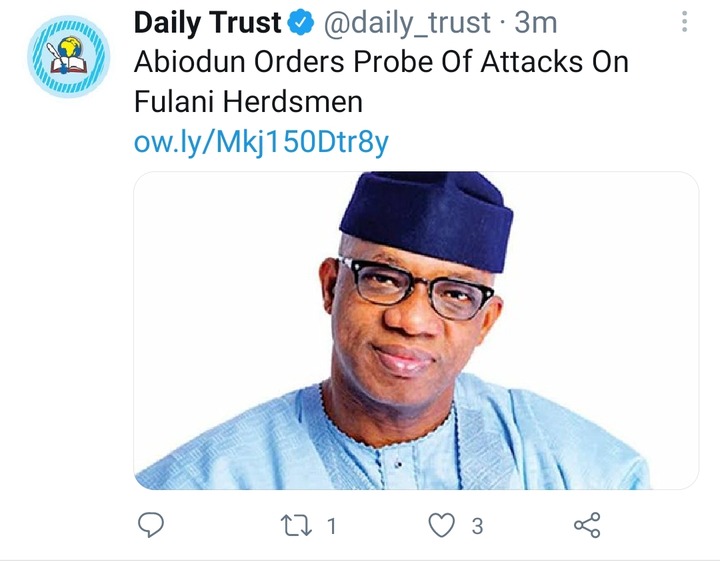 Ogun State Governor, Dapo Abiodun has ordered the security agencies in the state to investigate the recent clash between herdsmen and farmers in the Yewa area of the state that led to the loss of a life and destruction of properties.

Abiodun, who gave the order in a statement issued by his Chief Press Secretary, Kunle Somorin, in Abeokuta yesterday, also set up a Special Task Force that will maintain presence in all areas of the state prone to herders/farmers conflict to maintain peace and quickly respond to any form of violence or crimes.

“The government is immediately setting up a joint security patrol team / task force involving all security agencies in the state to not only deal with the situation, but to also nip in the bud, any threat to violence or criminality”; the governor was quoted as saying, adding “our first priority in Ogun State is the safety of lives and properties of everyone, and we will not compromise on that”

Abiodun who gave the order in Abeokuta at the end of the state Security Council meeting, also directed that those behind the recent violence in Eggua in Yewa North area local government area of the State should be brought to justice.

Content created and supplied by: Kannywoodgist (via Opera News )