The Truth About What Buhari Told Uzodinma: "I Will be Careful With Your Future Invitations"

By KreativeNews (self media writer) | 9 months ago

There have been plethora of reactions to a statement credited to President Muhamadu Buhari during his visit to Imo State. With many people now quoting the president out of context. 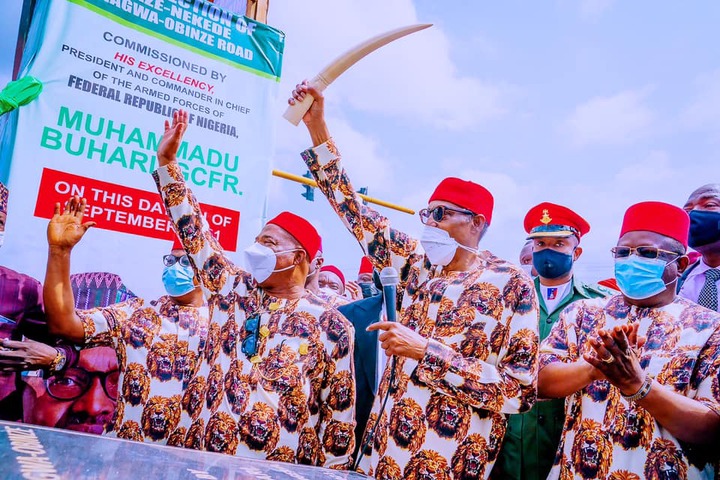 The president of the Federal Republic of Nigeria Major General Muhamadu Buhari (retd.) was in Owerri the capital City of Imo State last week to commission some of Governor Hope Uzodinma's projects.

After commissioning the project the president was received at the Banquet Hall of Imo State Government House by many dignitaries from the five South East states.

During the President meeting, President Muhamadu Buhari gave an extempore speech. It is a statement made by the president in this speech that many people are now quoting out of context.

In the meeting were dignitaries like: the president of Ohaneze Ndigbo Prof. George Obiozor, the governor of Ebonyi state Dave Umahi, Obi of Onitsha Alfred Achebe, Former Senate President Ken Nnamani, Former Chief of staff Ebitu Ukiwe just to mention but a few.

The President admitted in his extempore speech that he thought that Governor Hope Uzodinma invited him to come and commission projects but that he's amazed by the dignitaries that have come to welcome him at Imo State. He then jocularly told the governor that I will be careful with your future invitations.

However, many people have started quoting this statement out of context claiming that the president meant that he won't honor Governor Hope Uzodinma's future invitations. This is not true since the president was by the statement trying to show how honored he felt to be received by the galaxy of dignitaries present at the Banquet Hall.