By OmoobaAlekuwodo (self media writer) | 16 days ago

Ahead of the 2023 General Election, some of the prominent politicians and political gladiators within the ruling party, All Progressives Congress (APC), have been deploying political strategies that may favor the party's reelection in the next presidential election. 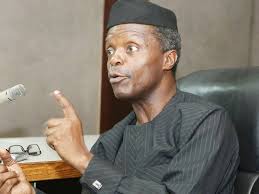 Interestingly, some prominent members of the ruling party, All Progressives Congress (APC), who are nursing ambitions to become the presidential candidate of the party in the 2023 General Elections have also commenced political activities that may, probably, ascertain their presidential ambition.

Definitely, Professor Yemi Osinbajo is a prominent politician who is gentle, calm, cool-headed and intelligent. His personal qualities could be considered as merit for his candidature, if nominated by the ruling All Progressives Congress (APC). However, in reality, politics is full of intrigues and monumental gimmicks that may, sincerely, deny Professor Osinbajo any chance of being nominated by the ruling party.

In the case Professor Yemi Osinbajo fails to get nominated as the presidential candidate of the ruling party, All Progressives Congress (APC), there are strategic political positions that he can occupy to assist the Africa and the World with his professional intelligence.

Sincerely, Professor Yemi Osinbajo may, likely, be nominated for African Union Mission assignments or United Nation mission tasks, if he fails to get nominated as the presidential candidate of the ruling All Progressives Congress (APC) in the 2023 General Elections.

Professor Yemi Osinbajo can apply his expertise in law, administrative experience as the vice president of Nigeria, morality and academic excellence to assist the continent and the world, at large, in resolving piles of civil unrest that currently worry Africa, as a continent, and the World at large.