After The Imo Prison Break Occurred, Here Are The Top 7 Biggest Prison Breaks in Nigeria.

By TheRelic∞ (self meida writer) | 1 months 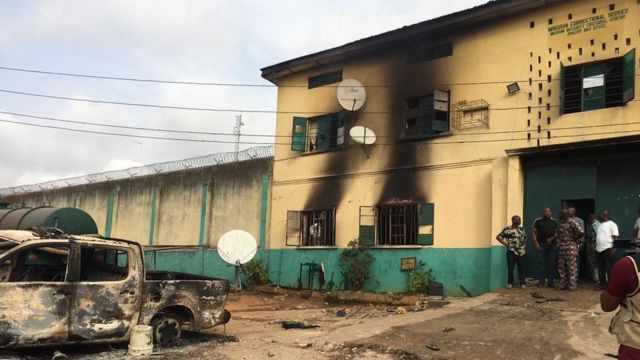 But with this recent occurrence, which prison break have been the biggest in the history of Nigeria. Let's find out in this ascending list of the top 7 biggest Prison Breaks in Nigeria:

This incident which happened on 2 November, 2014 resulted in the escape of 144 prisoners.

On 30 June, 2013, it was reported that the Olokuta Medium Security Prison in Akure, the capital of Ondo State, Nigeria was attacked by 50 unknown gunmen suspected to be Armed robbers and a total of 175 prisoners escaped.

This incident which happened in the Benin Correctional Center, Edo, on 19 October, 2020, had 200 prisoners that escaped.

On 6 December, 2014, Minna medium prison was attacked by 3 unknown gunmen suspected to be armed robbers and 270 prisoners escaped.

On 30 November, 2014, another attack on the federal prison at Ado Ekiti, Ekiti, by 60 unknown gunmen was reported. This attack resulted in the escape of 341 prisoners.

On 7 September, 2010, a prison break was reported in Bauchi prison in the northern Nigerian city of Bauchi by 50 gunmen suspected to be members of Boko Haram . This attack resulted in the escape of 721 prisoners.

On 5 April, 2021, about 1500 prisoners have been estimated to escape from the Owerri correctional facility.